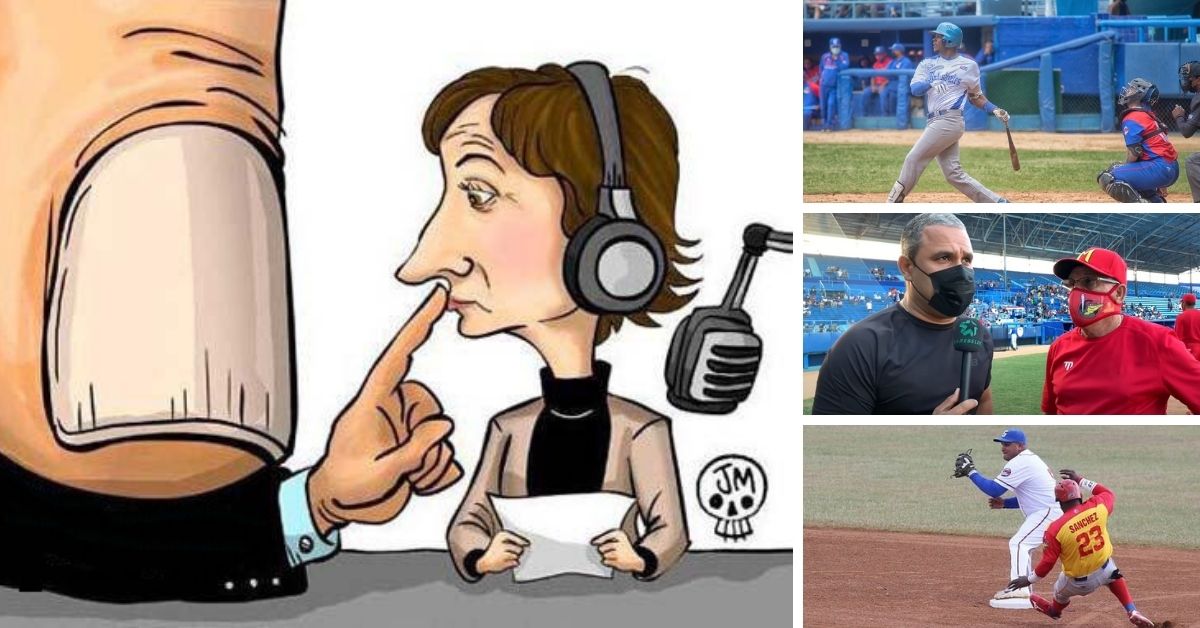 The measure recently taken by the National Baseball Commission on the athletes Andrés Hernández and Alexis Varona has brought negative consequences within the National Series that the only thing they do is attack the tournament, its protagonists on the field and the fans at the game.

Although the National Director of Baseball, Juan Reinaldo Pérez, announced in a press conference that the accredited media were able to obtain interviews from those involved in the competition, and the door was opened for the non-state press (in theory), the fear that has been instilled in the participants has become a real problem.

So real that journalists from the official media on the Island have complained these days about this situation. Players and managers denying interviews even with press credentials on the part of the interviewer, even regardless of the fact that in some cases they are known people.

In general, only a group of “very reliable” professionals have had the good fortune to access the majority. Not even of all the athletes and directors, because there are some like Michael González who made his position clear, alluding that his superiors have limited him from speaking publicly.

It may interest you: LEGEND OF MATANZAS received a car after 13 years waiting

Today I found a writing by Boris Luis Cabrera, in which the writer of Cubadebate and Tribuna de La Habana makes a new criticism on the subject. It had happened before with other journalists and even baseball players, as in the case of the out-of-class outfielder from Sancti Spiritus, Frederich Cepeda.

«I just stopped by to remind some people who are members of the “army of worried people”, as my friend Cortina says, that in every corner of life there are lights and shadows, otherwise we are blinded or dazzled. The same thing happens in baseball and our mission as journalists, in addition to highlighting the values ​​of this sport, Cultural Heritage of the nation, and informing fans about everything that happens on the playing fields; we have the duty to ensure the quality of the show and keep an insomniac pupil so that mistakes and injustices are not committed that tarnish it. This new problem that has arisen where the directors of some teams have stood up and deny that their athletes give interviews to accredited media, it must be tackled in time because it conspires against the normal functioning of a sports league and does nothing but throw us off the ground before the eyes of the world. Until now I have not wanted to put my finger on that sore out of respect for those managers who sacrifice so much every day in the midst of the turbulence of a championship so followed and loved by all Cubans, but everything has a limit. If the fans don’t have the opportunity to know their idols from the inside, if they can’t have details of the interiors of the championship, of future group strategies, and they can’t access the human being inside those uniforms; none of this makes sense. See you at the stadium.” Boris’s writing.

“Nobody wants to get in trouble. It has to be that it comes from the same Commission that they tell me that there is no problem, or that it is Cuban television, which is clearly fully authorized for that. But with everything and that I will always ask what the issues are. What is happening is unfair, but where the captain rules, the soldier does not rule, and my main problem is the result of my team. Honestly, that should be resolved between the press and INDER”, one of the managers of the National Series told me via Messenger that I think it is more than unnecessary to explain the reason why I do not mention his name.

For his part, in communication with one of the members of Industriales, he was broader in his opinion on this subject, asking me strongly that I never reveal his name in my writing. “I have always given interviews to everyone. I have even given them to you since you were out of the official media. Everyone knows what they have to say and has the right to say it, in addition, whatever it is, as long as it does not disrespect or fall into inappropriate things. This is something absurd, but unfortunately it is the rules that they imposed, and one is playing by those rules. I have said it, that those rules were signed without us being aware of it, but most of the players are not interested and sometimes they even prefer it that way to avoid giving interviews to a lot of people. If it changes or not, it will not be precisely due to pressure from the athletes, because with exceptions throughout the world the athlete is not looking for the interview, he prefers to be oblivious to that. That is more from the journalist, which is logical, because it is his job, ”he concluded.

The truth is that no one knows how far and how long the consequences of this regulation will come, which deprives the player of speaking with whomever he deems beyond the established time to train and play. In addition to being something exclusive to Cuban sports, this section of the regulation is in clear contradiction with one of the articles related to freedom of expression that are part of the Constitution of the Republic of Cuba, approved by a large majority as has been said before by the same Cuban institutions and official media.

Regarding what happens outside the Island, it is valid to clarify the following, and it is that in all serious leagues in the world, if a media outlet is not accredited to cover a certain event, for whatever reason, a journalist, an influencer, youtuber or amateur in general, you can get audio, video or written words from the athlete you want, as long as the latter is interested in giving them to you.

Only in certain very specific cases does the representative of the athlete, his club or his federation advise him not to give interviews. But that applies when you are in a contractual or judicial process. Outside of that, the athlete determines when and how he talks about the subject that interests the interlocutor. Or do whatever you want within social networks, as long as you do not transgress certain ethical and moral codes.

The position shown by the sports authorities in Cuba, although very questionable, is quite logical. In a championship that is going through its worst historical moment with everything and the blindness of those who say no, and within a society that also faces serious problems, everything negative that can come out of it that serves as criticism and not only by the so-called media alternatives, but within the increasingly powerful social networks, it will try to multiply itself by zero.

The one who does not owe it does not fear it, but the one who knows that he has problems, although many of them continue without recognizing them and only justifying them, will look for a way that they do not transcend and do not become a constant sword that exposes many things. that go beyond external responsibilities (I speak beyond Cuba).

That is why the entire hostile environment that is currently being experienced in the Series, in addition to being the responsibility of the Commission and INDER, was precisely the objective. In this way, no drop will escape the cup, even if it overflows one day and the consequence is even worse than what is happening today and that the only ones who benefit are those who run baseball and sports. But even without realizing it, they are also harmed, and not only by what comes in the future, by continuing to want to cover the sun with a finger instead of correcting the increasingly large and dark spots of that sun.

It may interest you: OFFICIAL NOTE: Cuba sanctioned 2 players who broke disciplinary regulations

The day it explodes then we will see who are the real bad guys in this movie, whether the journalists, the media, Facebook sites, fans and the players and coaches themselves who point out what was wrong so that the error or errors have just been solved , or those who pretend that things are going well and that the bad thing that is said is either a lie or just trying to destroy the greatest spectacle of the Cuban people. Time to time.

THE CONSEQUENCES ARRIVED: The Commission’s measures created a new and great problem for the National Series