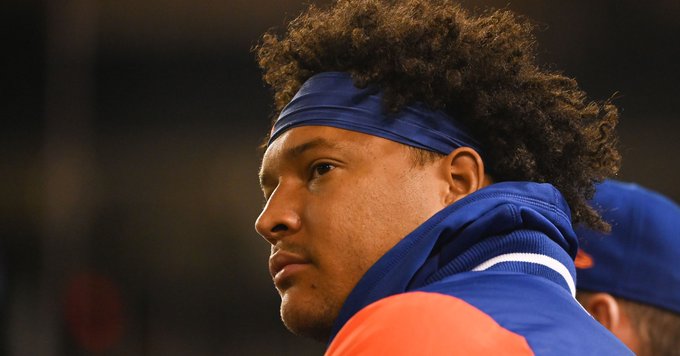 New York Mets starter Taijuan Walker was placed on the 10-day disabled list after he was injured yesterday against the Phillies.

The New York Mets organization announced late on April 12 that Taijuan Walker was placed on the 10-day disabled list due to bursitis in his right shoulder.

Yesterday in his first start of the 2022 Major League season, Walker, after retiring the second inning, showed some physical discomfort, which was thought to have been the knee that afflicted him during Spring Training.

But finally that was ruled out and they indicated after removing him from the match that it was an inflammation in his right shoulder. This injury was visible once Walker left the game because prior to that he pitched two innings striking out four batters, allowing no hits and throwing 20 strikes.

In place of the starter, the Mets activated Edwin Díaz, who is available to pitch again in today’s game against the Phillies.

The New York Mets’ starting rotation has been altered by physical discomfort of the pitchers, Jacob deGrom will be out for a month due to stress in one of his shoulders, while Max Scherzer with hamstring discomfort postponing his first start and now another member of his rotation Taijuan Walker with bursitis in his right shoulder.

Roster move: Taijuan Walker has been placed on the IL due to right shoulder bursitis.

• Taijuan Walker has been placed on the 10-Day IL with right shoulder bursitis.

• Edwin Díaz has been activated from the bereavement list.

Taijuan Walker was placed on the 10-day disabled list.