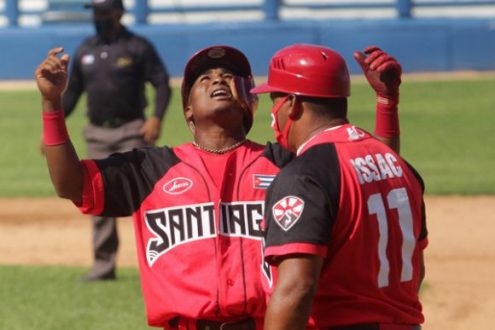 The Wasps from Santiago slipped into second place in the standings of this 61st National Seriesin a day where two of the teams that preceded them fell, a couple of were knocked out, and the remaining challenges were fought until the last moment.

The disciples of Eriberto Rosales attacked by air and thrashed the Island Pirates 10-0 in eight inningswith another superb mound demonstration by the experienced Danny Betancourt.

The 40-year-old right-hander, born in Songo la Maya, spoke to the rhythm of Guillermón Moncada’s conga, allowing just one hit by the infield in 7.1 innings of work while prescribing three strikeouts, to reach three victories in the season.

His troops supported him with 11 hits, including four from two bases, to crush his rivals before the established innings. Francisco Martínez hit two singles to drive in three teammates, Santiago Torres brought home two with a hit, Adriel Labrada drove in the same amount with a tubey, and Marcos Luis Fonseca fired a pair of doubles to drive in another.

Veteran Wilber Pérez was punished with seven runs (one dirty) in 3.1 innings of work, and charged with his first setback of the campaign.

The Tigres de Ciego de Ávila rebelled late in the match and defeated the Sugar Producers of Villa Clara 3-1to displace them from second place in the tournament.

The right-hander Javier Mirabal kept them in a fist for seven chapters, but one inning later he left the box leaving a runner in circulation and Raidel Alfonso could not put out the fire that the cats lit and took the loss after enduring a couple of runs and dominate a single rival.

Yorbis Borroto ruined the strategy of helmsman Pedro Jova by intentionally bowling the batter who preceded him to congest the angles, and scored an RBI hit to equalize the actions. Seconds later, Raúl González fired a rocket that brought two teammates to the plate, to bury the oranges.

Dachel Duquesne made a quality start by walking seven innings with a single touchdown to his records, but the credit went to Yairon Martínez by throwing a cool pace tackle. Vladimir Garcia saved his first game of the contest by closing out the fight by retiring all three opponents he faced.

For the Sugar Producers, Alejandro Díaz (4-1) boosted his team’s run, and Yuri Marcos Fernández (2-1) scored a tubey, the only extra-base hit of the game.

The Matanzas crocodiles continued in disgrace and lost by the minimum 7-6 against the Camagüey´s Bulls in the grounds of Cándido González, to suffer his fourth defeat in a row and fall to fourth place in the championship.

Miguel Borroto’s boys produced 14 hits (twice as many as their opponents) to come off a four-challenge losing streak. In a well-distributed attack, Luis Gómez went 3-4 with a tubey and an RBI, Alexander Ayala singled and doubled five times to also drive in one, and Leonel Moa (5-2) and Jorge Álvarez (5-1 ) hit a triple each.

Ángel Luis Márquez made a tremendous relief to credit the success, allowing just one hit without runs in 3.1 innings of work, with a trio of strikeouts given. The defeat fell on the shoulders of Carlos Brayan Álvarez by supporting two annotations in a relay of 2.2 chapters.

For the Yumurinos, Yariel Duque (3-2) hit a solo home run, and Jefferson Delgado and Yadil Mujica went 2-4 each with one RBI per capita.

At the Calixto Garcia Vegueros from Pinar del Río came from behind on the scoreboard and with two scores in the last inning, they scared the Holguin Cubs by beating them 8-7 to cross the line that separates the qualifying zone.

Lázaro Emilio Blanco and Roidel Martínez were the hottest with the wood by connecting 4-3 each, the first with an RBI, and the second with a double included. William Saavedra (4-2) and Tony Guerra (4-1), the latter with a tubey, drove in four runs between them.

Reilandy González pitched two clean innings for the win and Frank Luis Medina earned his sixth save by getting the last three outs, adding an unearned run to his stats.

Yuniel Suárez could not stop his opponents and went through the narrow door of the stadium by tolerating a couple of annotations in 2.2 innings worked.

For the Cubs, Franklin Aballe, 3-2 with two RBIs, and Maikel Cáceres, 4-2 with double and RBI, were the ones who stood out the most with the bat at the ready.

Yoelkis Baró rang a full lap with a companion in circulation, and the Guantanamo Indians stuck their arrows in the back of the capital’s Lions to surrender them 6-4 in the ring of the Nguyen Van Troi, in the first lawsuit of his particular struggle.

Guillermo Carmona’s troop left four runners cold on the pads in the first two chapters, and on two occasions the sacks were full during the route, waiting in vain for that saving connection that never came.

The eastern tribe had marked its territory since the second inning by a solo homer by center fielder Luis Jairon Hechavarría, the first that blue starter Pavel Hernández allowed this season.

Two chapters later they scored another dirty line thanks to an error by waiter Juan Carlos Torriente, the Industriales’ number 48 in these first 30 challenges.

Right in the middle of the duel, the felines woke up before the rookie lefty Daniel Blanco to inaugurate the racing locker. Two consecutive walks and a pair of four-base hits from Yasiel Santoya and Oscar Valdés sent him to the dugout to take command of the action at that moment.

Cacique Agustín Lescaille’s boys did not run away and entrenched themselves in their arena, and with a score in the fifth, and another in the sixth due to a home run by Overt Cremet with empty bags, they embraced on the scoreboard with their rivals.

In the eighth came the definition when Baró disappeared the ball over the mattresses of his headquarters, before the shipments of the reliever Remberto Barreto, the pitcher from Havana who exhibits the best average of opponents in this campaign.

The victory went to Yeudis Reyes, in an effective relief from the seventh inning, where he knew how to put his arm in moments of high tension.

The Cazadores de Artemisa gave the Alazanes de Granma a beating in their own field of the Mártires de Barbados, knocking them out 15-1 in eight inningssecond out of combat that was signed on this day.

A merciless onslaught of 18 hits unleashed the Westerners and with a nine-run streak in the eighth, they also managed to break a string of four consecutive knockdowns that had thrown them far behind in the series.

Henry Llorente (5-1) took the fences for the fifth time this season to drive in three runs, Carlos de la Tejera reaffirmed his batting lead by going 3-4 with a double included and a pair of RBIs, Dayán Garcia he scored three singles in four at-bats, and Yoan Moreno (4-1, triple) and Víctor González (1-1), drove in two runs for the rubber.

For Alazanes, Iván Prieto went 2-3 with an RBI, and Guillermo Avilés had a single and double in three official appearances.

Finally, in the only agreed night game, the Gallos de Sancti Spíritus defeated the Elefantes de Cienfuegos 1-0in a duel of pitchers typical of other distant times.

Rookie 19-year-old left-hander Alex Guerra did his thing again, walking two-thirds of the game with just four hits allowed and two walks given up for his fourth win of the season. Yankiel Mauri threw the rest striking out three opponents and earned the save.

Fellow rookie Kevin Hernandez, the same age, gave up a score over 5 1/3 innings and was beaten in the first decision of his career.

The only run of the game came in the sixth when reliever Islay Sotolongo hit a wild pitch with a runner on third base.

For the Roosters, Carlos Gómez went 2-4 and Yunier Mendoza hit a tubey four times, and Pavel Quesada went 3-1 for the Elephants, also with a double to his account. 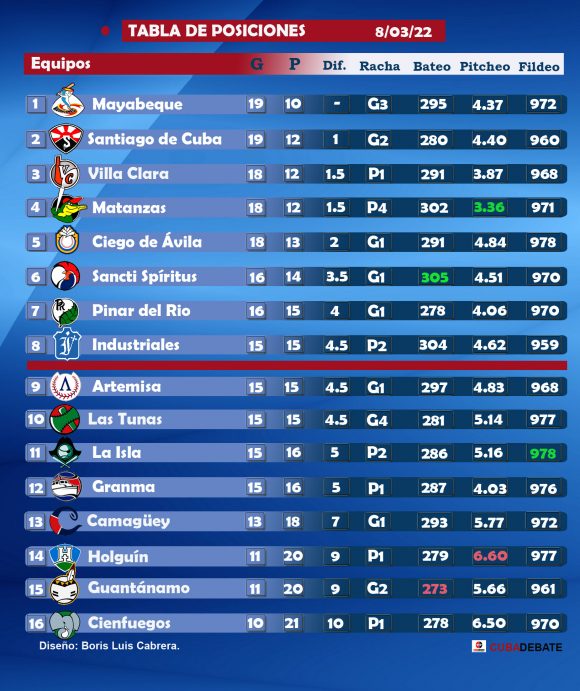 SNB 61: The Wasps flew to second place (+ Table of positions)