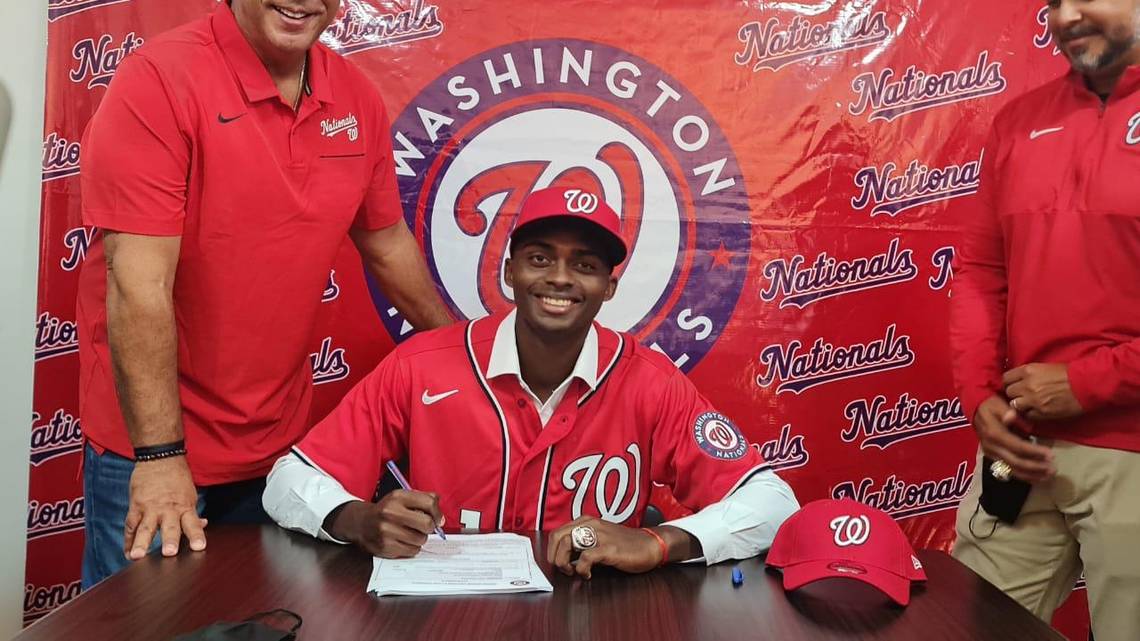 On the same day and at the same time that several Cuban baseball veterans played a nostalgic game in Miami, a good number of prospects from the largest of the Antilles joined professional baseball as a promise of future guarantee with bonuses that ranged in the millions to thousands of dollars.

According to reports, some 15 Cubans with the age of 16 began to sign their contracts with the 30 Major League clubs, as the first step to fulfill their dreams of reaching the best ball in the world, some with important bonuses such as Cristian Vaquero for $4,925,000 and others with just 10,000, but all with the same illusion of wearing a Major League uniform.

Here are some of those guys who began their professional careers in what is expected to be one of the last signing periods in this model, before an International Draft with a new labor agreement is implemented, as the Commissioner’s Office intends.

The Nationals must have seen a lot to give Vaquero a $4,925,000 bonus, the most in organization history for an international prospect to sign with the Nationals, but reports speak of a star in the making.

Suffice it to say that with this signature the team practically exhausts the rest of the money destined to maneuver in the foreign market. Washington entered this period with a sum of $5,179,700, but if Vaquero is still on the rope, say, of a Juan Soto, it will have been worth it.

Vaquero was originally a left-handed hitter, but learned to hit from both sides when he left Cuba, which has resulted in better pitch recognition and confidence at the plate. Standing at 1.92 meters tall and weighing close to 86 kilograms, the youngster has tremendous potential for undeniable power.

Perhaps, as the Rockies think, Jorge will be a future Gold Glove, because they offered him a bonus of $2.8 million for no reason, which speaks clearly about the expectations that the Colorado franchise has on this shortstop from the Cuban capital.

Due to his physiognomy, Jorge has been compared to former White Sox star Alexei Ramírez, who this Saturday participated in the Cuban All-Star Game. Reports say he has good hands and speed to run the 60 yards in 6.1 seconds.

At 18, he was the starting shortstop in the Cuba U-15 team that participated in the World Cup four years ago in Panama. The Havana native has abundant tools to succeed as a professional and is considered a high-grade prospect. In that 2018 World Cup, the young man hit .269, two doubles and three RBIs.

Once considered the Shohei Ohtani for his ability to hit and pitch, Oscar Luis Colás earned a $2.7 million signing bonus from the White Sox, perhaps the organization that has most deeply valued Cuban talent since newly elected Orestes Minoso to the Baseball Hall of Fame until recent times.

The Rays have found their fortune with Yandy Diaz and Randy Arozarena. Maybe the same thing will happen with José Lázaro Contreras, an outfielder who signed with the Tampa Bay organization with a bonus of $1,050,000. Now there are six Cubans who militate within the Florida franchise.

Born in Cienfuegos and just 16 years old, Contreras is a hitter who combines speed and contact very well, while several talent scouts agree that his swing will be much more powerful as he improves physically and matures as a player.

The Padres signed Yendry Rojas with a $1.3 million bonus. The kid from Ciego de Avila was the 24th prospect on MLB.com’s top 100 list, and the San Diego brass considers they’ve picked up a true shortstop gem.

Rojas is a beefy 6-foot-1, 190-pound youngster with tons of strength and plenty of projection. He has a chance to be an impact bat and already shows emerging power. He continues to improve his plate discipline and pitch recognition. He’ll start his pro career at shortstop, but could make the switch to second or third base.

Since leaving a national squad in the Olympic Qualifying held in the summer of 2021 in South Florida, César Prieto has aroused great interest from evaluators and teams. One of them, the Orioles signed him with a bonus of $750,000.

One of the best hitters of his generation in Cuba, Prieto, 22, should be invited to spring training. However, he must start in Class-A his work for the Minor Leagues. His ascent is expected to be rapid and sustained.

Jonathan Linares and Sadiel Baró were also part of the new wave of Cuban signings in 2022 under the Angels’ shadow. The first, a power pitcher, joined the Angels for a $90,000 bonus; while the second got a bonus of $125,000.

With the signing of Alberto Hernández, Kenny Gómez and Carlos Espinosa, the Astros contain 21 Cubans within their organization. First time a Major League team has 20 Cubans or more since the 1960s.

The 21-year-old with plenty of international experience, Andy Marlon Perez officially signed with the Nationals for a $10,000 bonus. The left-hander from the capital left Cuba in 2019 and from there he began to prepare to fulfill his dream: to sign with a Major League organization.

With an excellent curve and a straight that oscillates around 92 miles per hour, the former industrialist was part of several Cuban teams in lower categories and was part of the national team during the 2017 Junior World Cup in Thunder Bay, Canada. During that championship Andy pitched for nine and a third innings where he prescribed 15 strikeouts.

Jorge Ebro is a prominent journalist with more than 30 years of experience reporting on sports. Baseball lover and lost in love with boxing.