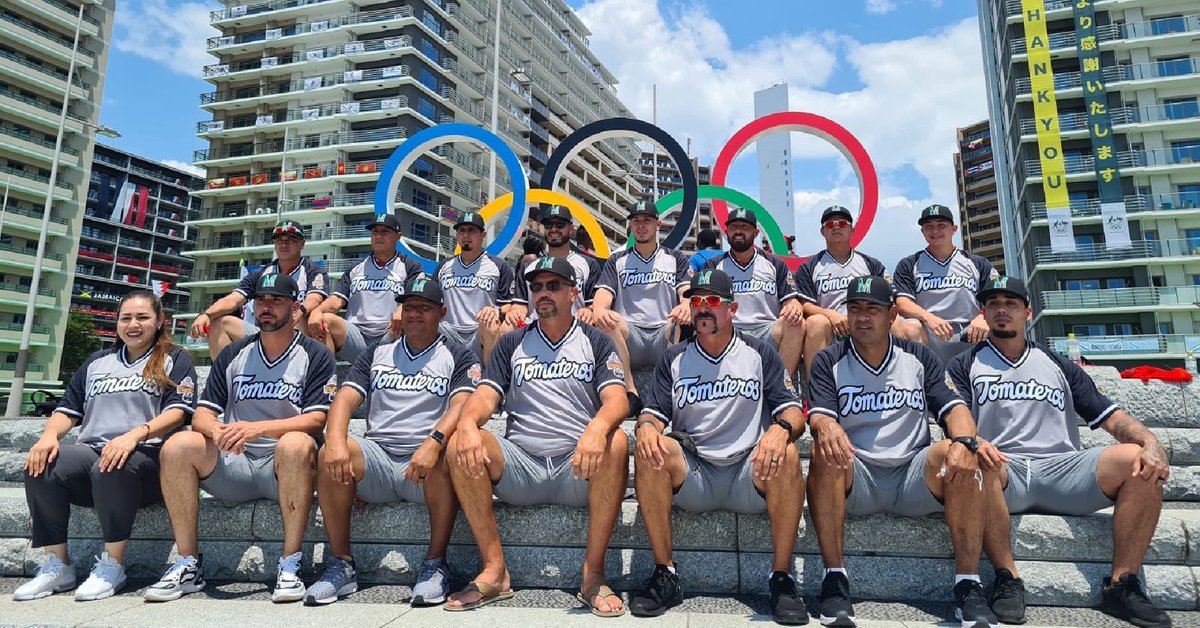 The severe sanitary restrictions at the Tokyo 2020 Olympic Village have not been an obstacle for the tricolor athletes to share their experiences with their followers on social networks. However, in the last hours a photo of the Mexican baseball team caused controversy.

And it is that this Saturday the majority of the team met in front of the iconic Olympic rings to take a group photo and publish it in networks, but they posed with the gray jersey of the Tomateros de Culiacán, two-time champions of the Mexican Pacific League (LMP).

It is worth mentioning that the Aztec National Team is made up of 24 baseball players, of which 11 are active in the Tomateros; four are from the Naranjeros de Hermosillo, three from the Cañeros de Los Mochis and two from the Mayos de Navajoa.

In addition, in front of him is coach Benjamín Gil, who led the Tomateros to the two-time championship but last March signed with the Mariachis de Guadalajara of the Mexican Baseball League (LMB).

Although the postcard was only published in the official account of the Sinaloan team, who decided to delete it, and not in that of the Mexican Olympic Committee (COM) or the National Commission for Physical Culture and Sports (Conade), many users expressed their outrage , as Fox Sports journalist Fernando Schwartz: Irreverent baseball team. They are not Tomateros. They are Mexico “he wrote on Twitter.

“This is a total lack of respect. The selected ones are representing a country, they are not representing a team or a city, that’s what the Caribbean Series is for “,” Those Tomateros feel like they are from another nation “,” Very bad, that tells you that they have not fallen twenty of what they are representing ”, were some comments about it.

However, others defended the right of baseball players to wear whatever garment they want for their publications: “Why are they making a claim that the members of the Tomateros took a photo with the Tomateros Jersey? Let them take the photos they want however they want ”,“ They are the players who play with Tomateros and decided to take a photo. That’s all, I don’t know how much they cry ”. Did you play with that uniform? More than irreverent, it seems irrelevant to me ”, they replied.

According to the Headquarters of Mission of the Mexican Delegation, the athletes that will participate in the Olympic Games must wear, solely and exclusively, the uniforms registered in the training sessions, competitions, ceremonies and in the venue where they are concentrated.

In this sense, the COM has a contract with the Chinese brand Li-Ning to dress all Mexican athletes during the Olympic Games, including the soccer team that has an exclusivity with the German brand Adidas.

But there is an exception with the Softball Mexico squad, who registered with the IOC the use of the Nike brand because Li-Ning could not provide them with the uniform they needed.

Coach Gil, when questioned on social networks after the photo was published from the Guindo team account, pointed out that it was a request from his club in the Winter League.

“If the club asked to take a photo of us and there is nothing wrong, I know that the members of other teams are also doing it and I applaud them and their hobbies. And whoever you go to, I applaud them and also if you go to Mexico. I represent Mexico, one hundred and with all my heart and soul “

Hours later, the account of the Tomateros de Culiacán again published a photograph of the entire national team, but this time wearing the Li-Ning uniform.

So far it is unknown if any action will be taken against the offenders.