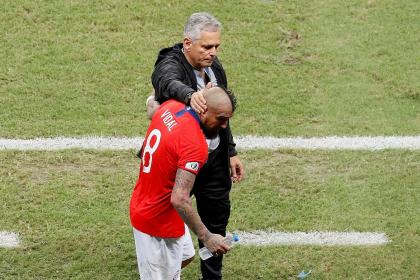 Reinaldo Rueda had a difficult time in Chile and ended up leaving his position as technical director of the senior team to arrive in Colombia and take on a new challenge after the also controversial departure of Carlos Queiroz.

However, despite the controversy and criticism, the Chilean players showed the appreciation they had for the Valle del Cauca coach, and on social networks, several of them posted messages of thanks to the coffee coach.

One of them was Arturo Vidal, Inter Milan midfielder, as well as a reference for the southern team, who spoke with W Radio on Tuesday in the midst of the America’s Cup concentration and referred to the work Rueda did in the national team. .

“He was a loyal person, who says things to his face, he always sought the union of the group, he earned the respect of me and of all colleagues “.

“We still have friendship, we talk a lot, people in Chile are complicated and the teacher endured as long as he could. It will do very good for Colombian football. ”

“For Prof Rueda, it was two difficult years. After not qualifying for the World Cup, all of Chile wanted new players and that is difficult after a generation that won two America’s Cups. Now it has been fixed a bit, we still have half of the champions left. “But it has been difficult to maintain the level and fight with other teams. We have faith to reach the goal of Qatar 2022,” said the midfielder from Brazil.

Likewise, Vidal spoke about the Copa América, praised the work of Brazil and Argentina, and referred to the present of his team.

“Brazil looks very good, it knows how to play in this climate, which is quite difficult, and Argentina, which is always very strong.”

“In Chile they should support rather than criticize. (Against Uruguay) Yesterday was a difficult game after all that was said. We hope that from now on we will only talk about football and we can have a good Cup ”, he concluded.