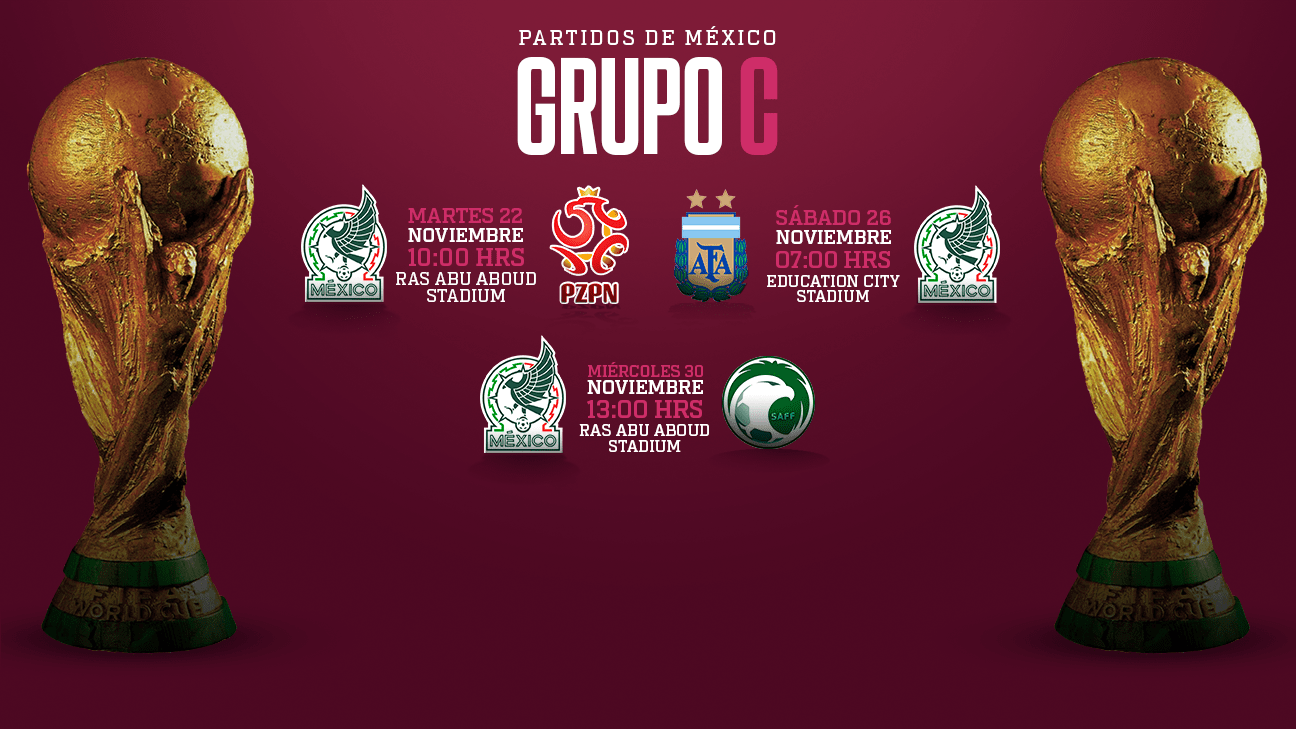 Mexico will start its journey in Qatar 2022 against Poland, continue against Argentina and close the group stage against Saudi Arabia

Mexico will share the Group C on the World Cup Qatar 2022 with Poland, Argentina and Saudi Arabiain the fight for a ticket to the round of 16 of the world fair, which will be held for the first time between November and December of this year.

Mexico will debut in qatar against Polandwhose maximum star is the striker Robert Lewandowskiwill continue against Argentinawith Leo Messi as the main reference, and will close the first phase against the unknown that represents Arabian Saudi

Mexicans and Poles have only faced each other on one previous occasion during the fair. The duel took place in the group stage of Argentina ’78 and the score was a resounding victory for the Europeans 3-1.

Zbigniew Boniek scored the first goal of the game minutes before the end of the first half, however, at the beginning of the second half, Victor Rangel tied the match. Two minutes later, Kazimierz Deyn placed Poland’s second on the scoreboard.

In the final stretch of the commitment, boniek got double and sealed the victory of Poland.

On a friendly level Mexico and Poland they have met eight times and the Mexican squad has won three games and lost the same number of duels. The last match between Mexico and Poland It was in November 2017, with a 1-0 victory for Mexico, thanks to a goal from Raul Jimenez.

Argentina it’s been a nightmare for Mexico in the World Cups, since El Tri has never been able to defeat him during this event.

The first confrontation between Mexico and Argentina in a world Cup Uruguay 1930 happened. The Argentine team won a resounding victory 6 to 3. After that match, more than 70 years passed for Argentina and Mexico They will meet again in a World Cup.

In Germany 2006, El Tri faced La Albiceleste in the round of 16 and gave a great display that moved millions of Aztec fans who were excited about advancing to the fifth game, however, an extraordinary score by maxi rodriguez in extra time he frustrated the dream of the Mexican fans.

Four years later, Mexico and Argentina they met again in the second round of South Africa 2010. The match was marked by a controversial goal by Carlos Tevez in a forward position, as well as by an error of Ricardo Osorio which caused the second entry of Argentina. The match was won by the South American team 3-1 with a goal from Javier Hernandez to discount on the scoreboard.

Total, Mexico and Argentina they have met 31 times and the ‘Albiceleste’ has won 15 games, while the Mexican team has won four times.

Mexico and Saudi Arabia they have played five games but have never met in one world Cup. The balance is tilted in favor of the Mexican team and presumes that he has never lost against the team Saudi.

Mexicans and Arabs have met three times in the Confederations Cup with Mexico winning all the matches. At a friendly level, El Tri has two games against the Middle Eastern team and the best result of Arabian It was a draw achieved in 1998.

The first World Cup he played Saudi Arabia It was United States ’94 and he signed his best performance in the round of 16. Total, Saudi Arabia has participated in six World Cups -counting Qatar 2022– and notably, Russia 2018 marked his return to football’s biggest party after missing out on South Africa 2010 and Brazil 2014.