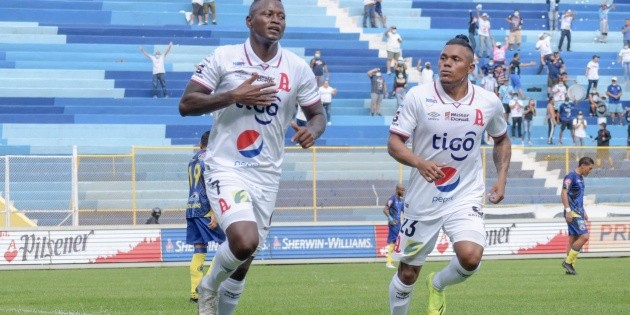 With a masterful performance by the Colombian Duvier Riascos, the alliance he won his first match of the Apertura 2021 tournament 4-1 against Municipal Limeño at the Cuscatlán stadium.

Three goals from “Culebra” Riascos and another from Henry Romero gave him the first victory for Alianza in this Apertura 2021, a tournament in which he again seeks to be champion. The Limeño was little before the almost total dominance of the premises. Ever Rodríguez scored the goal of honor at Cuscatlán.

With this triumph, Alianza is positioned as leader of the tournament on the first date and now it will be up to him to think about his second match to be held in the Toledo Valle de Zacatecoluca, home of Platense.


Alianza and Municipal Limeño faced each other again after not seeing each other in two tournaments. Milton Meléndez’s team jumped to the Cuscatlán grass with a marked 1-4-4-2 scheme, which had as a novelty the offensive bet with two forwards: Rodolfo Zelaya and the Colombian Duvier Riascos, the brand new signing of the runner-up in this Apertura 2021.

The locals began the meeting with a dominating air. Marvin Monterroza served from the beginning as the leader of the team that went on the attack on both wings where Víctor Arboleda arrived on the right and Michell Mercado on the left.

In just three minutes of play, the capital team had the first option on the right with Arboleda who won the baseline and crossed from below so that Mercado arrived at the second post a couple of seconds afternoons. It was the first warning.

After the minutes, the meeting seemed like a monologue of those at home. Alianza created a lot of danger and the first goal was close until 12 ‘, when Duvier Riascos broke the ice to make it 1-0.

The play of the first goal originated from the feet of Víctor Arboleda, who from inside the area positioned himself to send a pass to Duvier’s feet that was well placed under the three sticks to only push the ball towards the bottom of the net .

The goal made the Santarroseño team react, which in the 13th minute was able to match the actions after a Ramón Rodríguez header that crashed into Mario González’s crossbar.

Bruno Martínez’s team, with a 1-4-4-1-1 scheme, gave few sensations of danger. The most dangerous of the visiting team was the Mexican Felipe Ponce, who was in charge of generating options towards the wings to be able to give lotions to a lonely Harold Alas, overshadowed by the alliance defense line.

But it was until minute 30 that the Municipal Limeño came close to scoring the equalizer again through a header from Harold Alas that originated after a center from Carlos García. The ball would go into the Alliance hut if it were not for a changed hand save by Mario González.

It was until half an hour into the game that Alianza had a dynamic slump on the court and that was taken advantage of by the visitor, who at 35 minutes managed to score 1-1 through Ever Rodríguez.

Limeño’s goal was the result of a great execution of a counterattack. The Orientals came from suffering a match against Alianza that could end in a goal through Rodolfo Zelaya, but after the recovery, Bruno Martínez’s men came out on the left with Roberto Melgar and “Pichi” changed the game with a long pass to Ever, who after his control, he removed the mark of Iván Maciá and later beat Mario González.

The Alliance was again the same in the first minutes after the draw. He squeezed Municipal Limeño in his field during the last moments of the first period, but he was fortunate to score.

Michell Mercado and Víctor Arboleda were a constant danger from the sides, but both could not make the last pass for the goal. Rodolfo Zelaya was another player who insisted on scoring the second goal. The national attacker was close to scoring in the last moment of the first round, but after a right hand, Abiel Aguilera denied the goal and both tables were equalized to the dressing room.

SECOND TIME
The second half started, the Alliance continued with its aggressive script. The albo team was looking for practically all the options to be able to specify the goal of the advantage.

And after a good start, those of “Tigana” Meléndez took 8 minutes to beat Abiel Aguilera for the second time in the afternoon. This time, the goal originated from the left sector where after a cross from Mitchell Mercado, Duvier Riasco was once again well positioned to connect with the ball, which despite being touched by the goalkeeper’s hands, ended up going to the back of the cabin .

But Bruno Martínez’s team never lowered its arms and kept trying in the rival area. At 66 ‘, always by way of counterattack, Ponce leaked a ball between the center-backs for Harold Alas who, after making a connection with the ball, left Mario González on the road, but at the time of the final execution, the attacker stayed no angle to tie the game.

The albos continued to dominate in Cuscatlán, taking the ball away from Municipal Limeño. The physical factor took its toll on the visitor and made Alianza find the third in minute 77 through Riascos, who signed his first triplet with the elephant team.

The remaining minutes were processed for the Alliance, which ended the game by walking the ball from sector to sector to end the match with a goal from Henry Romero.