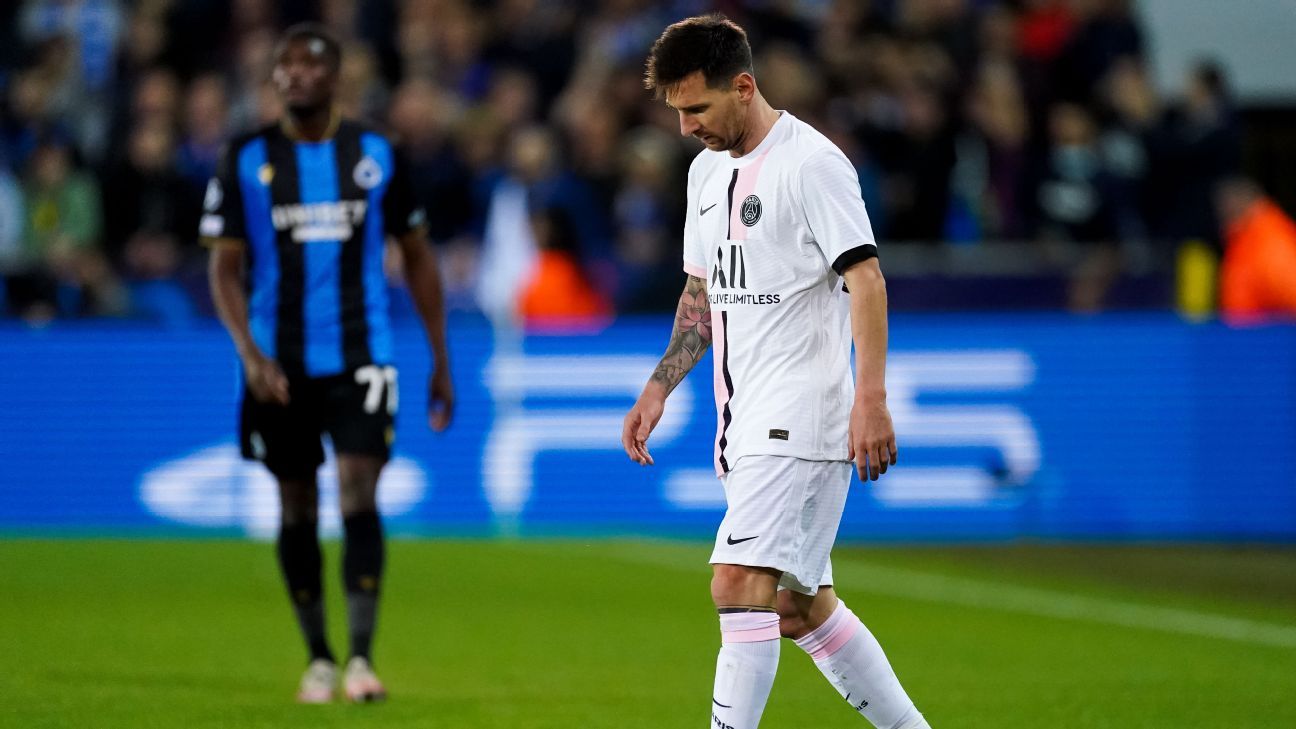 The Champions League began with a first day in which the news multiplied. It failed, it has no other consideration, PSG in Belgium, stopped by a spirited Bruges who turned the supposed drive of the favorite theoretician into an ordeal. The magic trident Messi–Neymar–Mbappe it was little less than invisible and those of Pochettino received a cure of humility as unexpected as it was arrogance.

Of course, if PSG made the news, it was no less so for Barcelona on Tuesday, crushed with compassion by a Bayern who thrashed him without the need to humiliate him as in Lisbon. Barça, there is nothing, they did not shoot a single time between sticks … And one shot was enough to Haaland and Cristiano Ronaldo, the tireless, to score, although if the Norwegian opened the victory of Dortmund in Istanbul, the Portuguese ended up being useless for a Manchester United defeated against all odds in Switzerland.

The goals followed one another in Manchester, where City started and ended up winning comfortably … After suffering the rebellion of a Leipzig that never gave up and came to embrace the draw, a draw with which Atlético-Porto was closed, who had a goal disallowed Mehdi Taremi) in the last moments.

A name? Sebastien haller, author of a goal poker at the Ajax exhibition in Lisbon. A battle? the one they fought at Anfield Liverpool and Milan, with a red victory after lifting the 1-2 with which the Italians advanced.

The Champions started in a big way. With news on all stages. And a resounding debut: that of the Moldovan Sheriff, ready to continue making history.

GROUP A. The fiasco. Leo Messi’s continental debut with PSG ended with a monumental fiasco. No sign of the great favorite for the title, Bruges subjected him to infernal pressure, overcoming Ander Herrera’s initial goal and making it clear that Pochettino has a constellation of stars but a team, collective, still very far from what is expected . Messi crashed into the wood but PSG did not see the football, which was put by a Brugge who even deserved to take a victory that would have been as surprising as it was deserved. And if the French team failed badly in Belgium, Manchester City suffered and ended up beating Leipzig, which overcame 2-0 to threaten to tie a game that Guardiola’s men were finally able to solve spectacularly.

GROUP B. Equality. Griezmann’s presentation, received with a division of opinions by the fans of the Metropolitan, ended up being the background news in a game that was choked on Atlético de Madrid, stopped by the solvency of Porto del Tecatito Corona. The Portuguese team understood the need to give the initiative to the colchoneros but never was overwhelmed … And came to embrace the victory that was denied when the goal was canceled, a great goal, by Mehdi Taremi. Meanwhile, at Anfield, Milan came back from Liverpool’s initial 1-0 but ended up giving in to the Reds’ comeback in the second half, sentenced by Jordan Henderson in a superb match.

GROUP C. Matadores. Erling Haaland, of course. He opened the victory of Borussia Dortmund in Turkey and already has 21 goals in 17 Champions League games to make it clear that he is the key maximum of his team to aspire to something in Europe. The German team enjoyed a comfortable game … Until Montero, assisted by Pjanic, cut his advantage in discount, suffering the last four minutes that did not deserve to exist. All this before Ajax dressed in their best finery in Lisbon to destroy a Sporting that they swept away with a poker of goals from Sebastien Haller, who arrived from West Ham to become the goal-man of the Dutch club, whose continental presentation it was magnificent.

GROUP D. To the limit. Real Madrid made the saying good: their matches never end until the end … And when in the end a dull draw at San Siro was understood against an unsuccessful Inter, Camavinga appeared to assist Rodrygo in the last-minute goal that he scored. gave a victory of exceptional importance for the Spanish team. Meanwhile, the euphoria was unleashed in Moldova, where the debutant Sheriff, reached the group stage after overcoming up to three previous rounds, debuted with a heroic victory over the disappointing Shakhtar, collapsed by the goals of Adama Traore and Momo Yansane.

GROUP E. Barca nightmare. The reunion could not have been more disheartening for a Barcelona that did not even put Neuer to the test while he was devastated by a Bayern Munich at half throttle, which did not need to press the accelerator to the maximum to make clear the difference between the two teams. Bayern, with the double-scorer Lewandowski at the helm, proved to be a contender for the title while Barça, with Koeman already in question, left samples worrying enough to even doubt their qualification for the round of 16. It was fortunate that Benfica did not transfer their dominance in Kiev to the scoreboard and did not go from 0-0 against the Dynamo.

GROUP F. Swiss ecstasy. Cristiano Ronaldo did not miss the appointment and became the first scorer in the Champions League this season … Before Manchester United suffered the expulsion of Wan-Bissaka half an hour into the game and mutated his powerful image into a dwarfed one, barely occupied in defending his short income and punished by the spirit of a Young Boys who, after equalizing midway through the second half, gave himself the pleasure of coming back at the last gasp of the game. Meanwhile, in Villarreal, Atalanta was also able to overcome the yellow submarine’s comeback to end up achieving a draw that may have no small significance in the final fate of the group.

GROUP G. Unexplained forgiveness. No sign of the expected great Seville, fortune allied with the Spanish team seeing how Salzburg had, never seen before, three penalties in 37 minutes … And two of them missed. How could it be otherwise, the 1-1 also came from a penalty, still in the first half, and already in the second, the expulsion of En-Nesyri ended up off-centering a Sevilla that deserved to win but never knew how to do it against a rival who survived with greater solvency than suspected. The group exploits absolute equality as Wolfsburg in France were unable to take advantage of the Lille crisis, settling for a disappointing goalless draw.

GROUP H. Suffering and walk. Juventus abandoned the depression in Sweden. It was not exhibited in the game but it walked on the scoreboard thanks to the goals of Alex Sandro, Dybala, from a penalty, and Morata to open the Champions League with a resounding victory that should return some peace of mind while waiting to receive within two weeks to Chelsea, a champion who took 70 minutes to end the resistance of a defensive Zenit but only gave in to the goal of Lukaku, the new star of the champion.