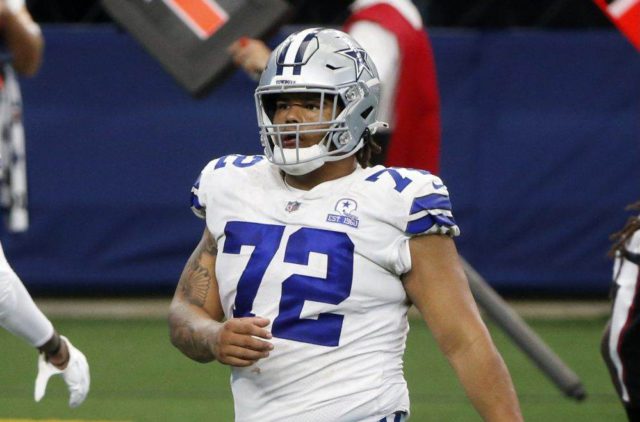 If there is a topic of interest that can be discussed about the Cowboys in 2021, it has been their great development on defense. With the arrival of Dan Quinn, the team caught a second wind and became a dominant group that even managed to hold the reins in tight results. However, there are some elements that have not finished shining, and that is the case of defensive tackle Trysten Hill. Who came as a great promise thanks to the 2019 Draft but so far, he has not achieved what many expected.

Hill ended up being the 58th pick in the Draft that year and the Cowboys’ first pick, as their first-round pick was traded to the Raiders for Amari Cooper in October 2018. For his rookie year, Trysten ended up only participating in seven games, posting five combined tackles. Clearly, he couldn’t be around half of the team’s defensive snaps.

Already after his second year, there was an improvement in the DT compared to his rookie season. However, he was only able to participate in five matches as he tore his anterior cruciate ligament in week 5. Interestingly, it would be in the same match that he had his compound fracture in Dak Prescott’s right ankle. By 2020, he would have 11 combined tackles, but his rising production was stalled thanks to the injury.

Cowboys DT Trysten Hill (PUP list) is practicing for the first time since ACL tear vs. Giants on Oct. 11, 2020. His strides have been encouraging. Coach Mike McCarthy: “I think he’s such an explosive player. …I am looking forward to seeing him work tomorrow in pads. He looks good.” pic.twitter.com/5OZsy93N7b

For the 2021 campaign, Trysten started on injured reserve. He barely saw action again until week 10 in a 43-3 win over the Atlanta Falcons. Of course, his impact didn’t come close to what was seen in 2020, making 11 combined tackles and at least half a sack. But he did not have the same scope as some elements that came that year from the Draft, such as the specific cases of Osa Odighizuwa and Quinton Bohanna. Even veteran Carlos Watkins looked much better, signing another year with the Cowboys for 2022.

The struggles Hill has had on the field can’t be overlooked, either. During Week 3 of 2020, he sprained Seahawks running back Chris Carson’s knee. The play had already ended and consequently the rival RB ended up with a sprain.

This is one of the dirtiest plays I’ve seen in *any* sport in a long time.

*This* is how you end someone’s season.

I hope the league punishes (suspends) Trysten Hill swiftly. Thankfully Chris Carson walked off the field under his own power. #SEAvsDAL pic.twitter.com/Wnxj6uciJR

Likewise, he would also go through a controversy in the Thanksgiving duel in 2021 against the Raiders. On that occasion, Hill hit Las Vegas offensive lineman John Simpson in an altercation after the game ended. As a consequence, the defensive lineman would end up suspended for one game.

Now, with Hill in his contract year, not much is expected of the player except that he can stand out in Oxnard. There are clearly a lot of defensive linemen ahead of him and perhaps the organization is evaluating other options for the player. For example, the possibility of a trade depending on his production in practice.

Missing a total of 22 games after the injury in 2020, perhaps there is not much that the manager can do to make an impact on the team. Aside from the competition he has with the likes of Osa in his second year, as well as Neville Gallimore already being a vital part of the team, Dan Quinn also has a tendency to use some defensive ends on the interior.

So if you throw Quinton Bohanna and Carlos Watkins into the equation as well, it doesn’t look like a very clear future for Trysten with the Cowboys. After all, he has remained as a promise and has not fulfilled. Well the lone star team could trade him depending on his participation. But another option that is not ruled out is to release it.

Either way, there is talk of Hill going to Washington. Based on various rumors, the NFC East rival would seek more depth at the position, despite having an extremely solid defensive line. Perhaps a change of scenery could favor Trysten in his development as a professional player.

In short, Hill has a tough time if he wants to land a big job on the Cowboys at this point. If the team doesn’t see some kind of improvement, they could simply look for some veteran to let go of another NFL franchise. After all, the Cowboys have no problem signing players cheaply who want to play for at least a year. The outlook for Trysten does not look encouraging, but he will depend entirely on himself.

Will Trysten Hill make the Cowboys’ 53-man roster this year?