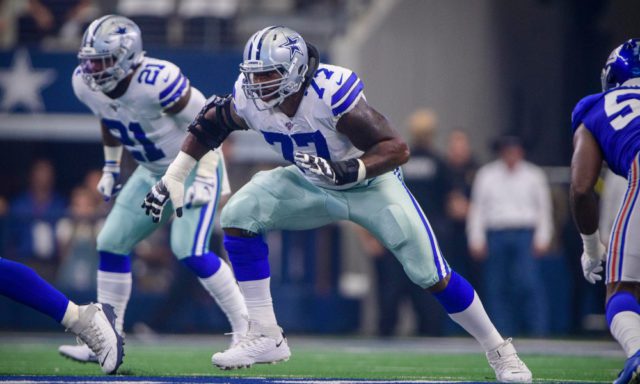 One of Dallas’ priorities for this year’s NFL Draft is to strengthen its offensive line. Although they have the right tackle job filled with Terence Steele, the departure of Connor Williams leaves the Cowboys without a starting left guard. And while that position will be a priority in the draft, the team could also look for a future replacement for left tackle Tyron Smith.

Coming to the Cowboys as the #9 overall pick in the 2011 Draft, Smith has been a mainstay on the Cowboys’ offensive line for the past decade. The USC product has been selected to the Pro Bowl eight times and to the All-Pro four times. In addition, he is part of the 2010 NFL All-Decade team.

However, age and injury proneness are taking their toll on the veteran tackle. Since the 2016 season, Smith has not played a full season due to various injuries. Without going too far, Tyron has missed 20 games the last two seasons. And that raises concern for the future.

Tyron Smith (ankle) has been ruled out for next Sunday at New York pic.twitter.com/sYuypsWVKE

Therefore, it is very likely that the Cowboys are already considering an eventual departure of Tyron Smith. It is noteworthy that, given the need to gain cap space this year, the veteran tackle’s contract was not restructured. With this, the team has the option to release Smith in the 2023 season and get $9.5 million of cap space.

Making this move would mean for Dallas to repeat what it did this year with La’el Collins, who was cut to free up salary bills. However, the team had Terence Steele to fill the vacancy left by Collins at right tackle. And this is something the Cowboys don’t have in Smith’s case: a guaranteed substitute.

It is true that the cowboy team has Josh Ball, a fourth-round pick in the 2021 Draft, on its roster. However, injuries prevented Ball from having opportunities last season. So it’s unknown if the young lineman could be a solution for Dallas at left tackle.

This would leave the Cowboys in a dilemma. See if Tyron Smith can stay healthy in 2022 and if Josh Ball can be his replacement. Or, look for a replacement for Smith in this year’s Draft even though the team is most urgent at left guard.

This year’s Draft is highlighted by the large number of prospects in the offensive line. So the Cowboys might want to take the opportunity and pick a left tackle. With this, they would have the relief of Tyron Smith for the next few years.

One of the flashiest talents for that position is Evan Neal. The Alabama product has the attributes to be a starter from day one. With his great size and a unique blend of patience and decisiveness, Neal can be an insurmountable wall for opposing pass-rushers.

Then there’s Ikem Ekwonu, a prospect from North Carolina State. Although he has experience as a guard, this young lineman is projected to play tackle in the NFL. And while he has room to improve in pass protection, Ekwonu has the size, power and tenacity to be a nightmare for opposing defenders.

Player who served his senior year as an LT but capable of playing any position on the offensive line.

In the Draft it will be a very high selection, top 3. 🔥pic.twitter.com/NLLFjSah7o

Now, the biggest problem with Neal and Ekwonu is that they might not be available when it’s Dallas’ turn at 24th. The same goes for other tackles like Charles Cross (Mississippi State) and Trevor Penning (Northern Iowa). If the Cowboys wanted to go for any of them, they would have to trade and sacrifice some picks. And seeing how valuable Draft capital is to the Cowboys, this is an unlikely scenario.

That said, there are other tackles who could be available when it’s the Cowboys’ turn in the first round.

One of them is Tyler Smith, a product of Tulsa who is compared to Trevor Penning because of his physique. This prospect has the attitude and power coaches look for in a tackle, though he needs to improve his timing. Now, Smith may still be available in the second round of the Draft. So if Dallas doesn’t prioritize him in round 1, he might have a chance to pick him up on day two.

Another one who could be available at the end of round 1 or even round 2 is Bernhard Raimann. The prospect from Central Michigan raises questions due to his 25 years of age and his difficulties in staying grounded. However, Raimann is one of the most athletic tackles in this year’s class, which he showed with his performance at the NFL Combine.

It is true that the Cowboys can leave for next year the task of finding a replacement for Tyron Smith. And more so now, when the most urgent need is to add a starting left guard. However, let’s remember that in the Draft anything can happen. And while a left tackle isn’t among his priorities this year, it remains to be seen if Dallas decides to bring in a young talent who can at least be Smith’s backup this year.

Will Dallas pick a replacement for Tyron Smith in the Draft?