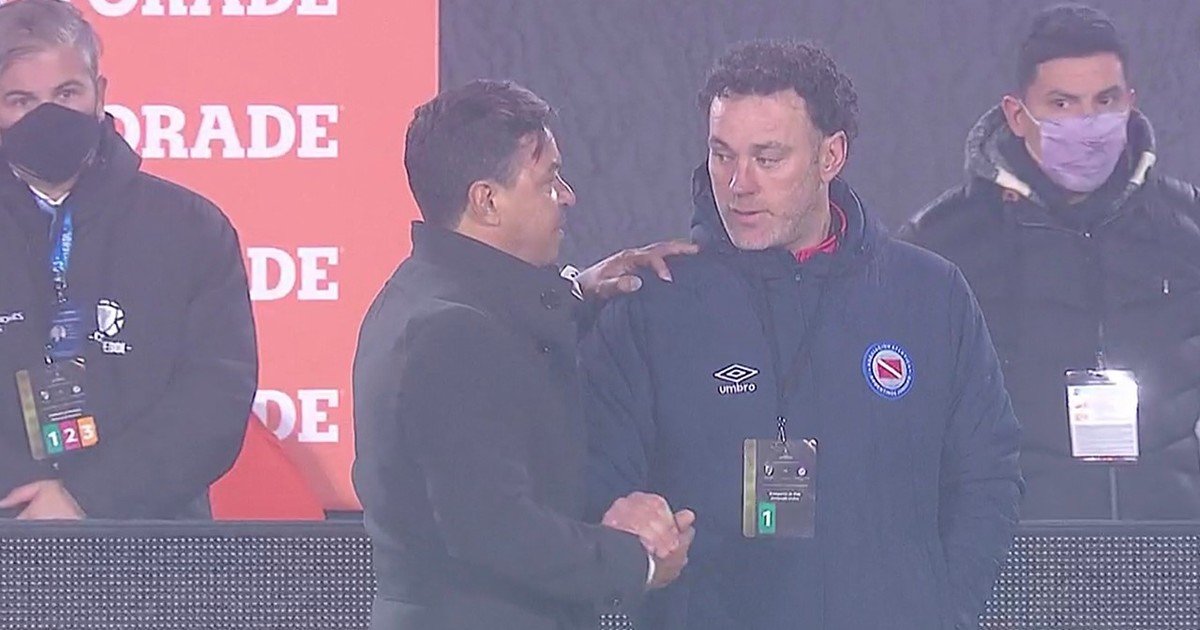 -¿But who the fuck are you to tell me that? If you live complaining too.

It may sound exaggerated, but last night Marcelo gallardo he met his black beast. It is that, although they have not played great matches in defining stages, Gabriel Milito he is one of the few coaches to hold a positive record against the most winning coach in River’s history. Until yesterday’s match for Copa Libertadores between River Y Argentinos JuniorsThey had played four times and Milito had three wins. And it seems that that statistic played its game apart. So much so that when the former Barcelona player asked for a yellow, Gallardo jumped to the jugular: “You got me tired I don’t want to hear you anymore“. From there is that the spicy response of Milito arises that surprised the DT of River:” But who the hell are you to tell me that? If you keep complaining, so do you. “

When he saw that the fever of DT del Bicho was quite great, Gallardo did not cross him again. But Gabi continued: “The only thing left is for you to tell me what to say. The only thing missing! The only thing missing is that I have to ask your permission“. The Doll returned one of those responses that heat up discussions more:” Calm, calm. “I’m calm,” continued GM. “You can’t tell,” MG retorted.

All the details of the cross between Marcelo Gallardo and Gabriel Milito in the 1-1 draw between River and Argentinos Juniors. pic.twitter.com/d9Hozy3RB8

As soon as Bruno Arleu de Araujo ended the 1-1 between River Y Argentinians for the first leg of the eighth of the Libertadores Cup, Marcelo gallardo He left the area of ​​the substitute bench and walked at a steady pace towards that of the rival, where he met with Gabriel Milito, who also came out to meet him. “I was wrong“, Gallardo told him and shook his hand. Although he continued with his speech while the television cameras took the dialogue and the absence of fans made it possible for it to be heard quite clearly.

When he explained to him that he had reacted because Milito had “sent one of his players in the box” asking for a yellow card, the DT del Bicho replied: “You also asked.” “I didn’t ask,” Gallardo answered firmly. “You can’t tell me to shut up,” complained the former Independent: “You told me, I can’t take you anymore.” And Gallardo justified himself: “I couldn’t take you any more asking for yellow ones.”

It all happened under the gaze of the fourth official, Fernando Echenique, who when he saw that things would not happen to a higher level, asked: “Can I go calmly?” That brought a smile to the technicians who separated and left for their changing rooms.

Already calmer and after analyzing the performance of their teams, the coaches were consulted about the tense crossing and, although they tried to avoid the issue, each one gave their explanation.

“They are not things that I take into account, the important thing is what happens in the game. Nothing happened. I have known Gabriel for a while and we are talking about what happened in the game and they are things that remain there. Nothing else than that, “said Gallardo.

#LIBERTADORESxESPN After the final whistle at the Monumental, Marcelo Gallardo and Gabriel Milito cleared things up under the watchful eye of Fernando Echenique: during the game, they had a yellow cross. All done? pic.twitter.com/EzHTHKg2as

Milito also chose to minimize the situation: “With Gallardo we will talk a little about the game and that we will see each other next week in The Paternal to see which team does better to advance to the next round. ”

Although the talk on the field of play was always on good terms -in fact they never let go and they were almost embraced for a large part of that time-, both exchanged reproaches before the look of the fourth official, who approached to verify the reasons for the crossing . And, although they obviously could not agree, after a few minutes, they said goodbye in the best way and each one continued on their way.

The DT of River He reproached the Argentinean for asking Fabrizio Angileri for the yellow after a foul in the second half. It bothered him and he let him know. Milito gave him his point of view, not agreeing with the Doll’s arguments. “You cannot send me in cana “, it was possible to read in the lips of the technician of the Bug.

This Wednesday’s match at the Monumental, was the fifth confrontation between Marcelo Gallardo’s River and a team led by Gabriel Milito. And the final 1-1, in this first leg of the round of 16 Libertadores Cup, was the faithful reflection of how Gaby became a specialist in neutralizing the Doll’s game.

The streak continues in favor of the Argentine coach, now with three victories, a draw and a single defeat. And this in the Monumental ends up being a more positive draw for the Bug, who takes a point and a goal as a visitor.

When is the rematch and how is it defined

River and Argentinos opened their round of 16 series, this Wednesday at the Monumental. It was 1-1, with goals from Suárez and Hauche. A result that suits the La Paternal team better because of the visitor score. When is the rematch and how is it defined?

El Millo and el Bicho will be face to face again next Wednesday 21st, at 9.30pm, in La Paternal. In the middle, River will play on Sunday against Colón, from 18 in the Monumental, for the first date of the Professional League. Meanwhile, Argentines will visit the same day Independent. It will be at 8.15pm in Avellaneda.

The winner of this series will go against Boca or Atlético Mineiro, that in the first leg they equaled 0-0 with controversy over the poorly annulled goal against Pulpo González. The quarter-final matchup is scheduled for mid-August.