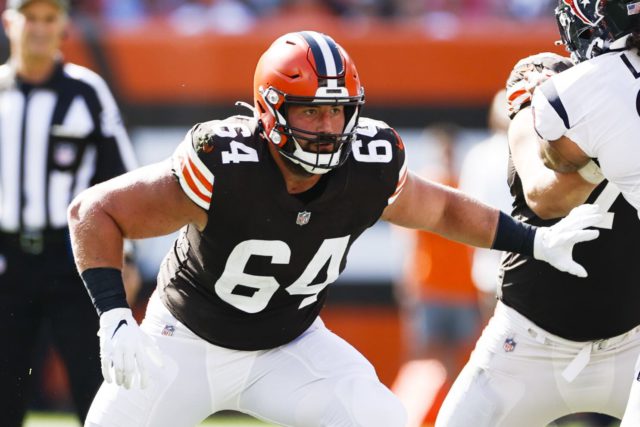 There are only a few weeks left before the start of the Draft on April 28. In the midst of potential first-round picks, there’s a lot of talk about the Cowboys’ primary needs. The cowboy team is in dire need of an offensive lineman to function as left guard. Although on the other hand, there is talk of the possibility that Dallas will choose a receiver with the number 24 if there is a good name available among those who can choose.

Given all this, we should not ignore the possibility that the offensive line may have some changes for the 2022 campaign. La’el Collins went to the Bengals and Connor Williams to the Dolphins. As far as the right tackle position goes, the team already has it all covered with Terence Steele. The player would enter his third year as a professional and left pleasant impressions in 2021, so the option for the right will be clear.

Williams’ absence does leave a clear review of the prospects at left guard who will be in the draft. For looking at the cowboy roster, Connor McGovern just didn’t measure up at the position. So, there are two of them that are getting a lot of attention and the Cowboys could get one of them if they get to the 24th pick. On one side is Boston College’s Zion Johnson and then there’s Texas A&M’s Kenyon Green.

Zion Johnson has made a lot of noise in the Senior Bowl and being a guard one of the main needs for the Cowboys, prepare to hear his name a lot these months. pic.twitter.com/S4s9ksDhJP

However, it would not hurt to see the possibility of looking for a center. Not necessarily in the Draft, as the Cowboys have other targets in their sights. But if in free agency, and there is a specific one that if they take it seriously in the offices, they could have it at any time.

This is JC Tretter, who is currently a free agent, being one of the best centers in the entire NFL. On March 15, the Cleveland Browns released him after signing a contract in November 2019 for a period of three years.

Center JC Tretter, the president of the NFLPA, is getting released by the Cleveland Browns, per source.

Taking a closer look at the center’s numbers, he averaged 78.7 at the position in the 2021 season, according to Pro Football Focus. Also, you could comment on the fact that he is one of the best pass-blocking centers in the entire NFL. His average on this stat is 83.7, just behind Chargers element Corey Linsley. As if that were not enough, his numbers and production have remained constant since 2018.

As far as the injury section is concerned, it is practically non-existent. Tretter has been in at least 16 games in the past five seasons. With just one game left in the 2016 season. And to top it off, he is a widely respected player among his peers in the league. Since he himself is the President of the NFL Players Association. Managing to have him re-elected on March 12.

The 31-year-old center could be a great alternative to what Tyler Biadasz has been offering. In the case of the latter, he has been working with Dallas for a couple of years. And even though he’s had his moments, his performance has been just standard. Finally being the starting center in 2021, he only averaged a 65.1 grade all season, the lowest of any Cowboys starting offensive lineman.

Of course, Dallas has been suffering from the early retirement of Travis Frederick, who left the discipline in March 2020. One of Biadasz’s main attractions at the time the Cowboys selected him in the fourth round of the Draft that year is that he came from the University of Wisconsin, the same one in Frederick. So far, Tyler hasn’t been able to emulate the success of Travis, who made the Pro Bowl five times.

Therefore, Dallas could have a golden opportunity if they get the services of Tretter to raise the level at the position. Since as mentioned, pick 24 is going to be either a guard or a receiver, and there’s unlikely to be any surprises in that regard. In an unexpected twist, Dallas could select center Tyler Linderbaum from Iowa. But not only is he a long shot with the needs out there, he might no longer be available by the time the Cowboys have to draft.

In general, Dallas could make other moves, despite the fact that there are only a few weeks left before the start of the Draft. It would not hurt to analyze the position of the center and give greater hierarchy to a line that was widely criticized last season. However, it is time to wait for the decisions made in the offices for next season.

Should the Cowboys look for a better starting center?