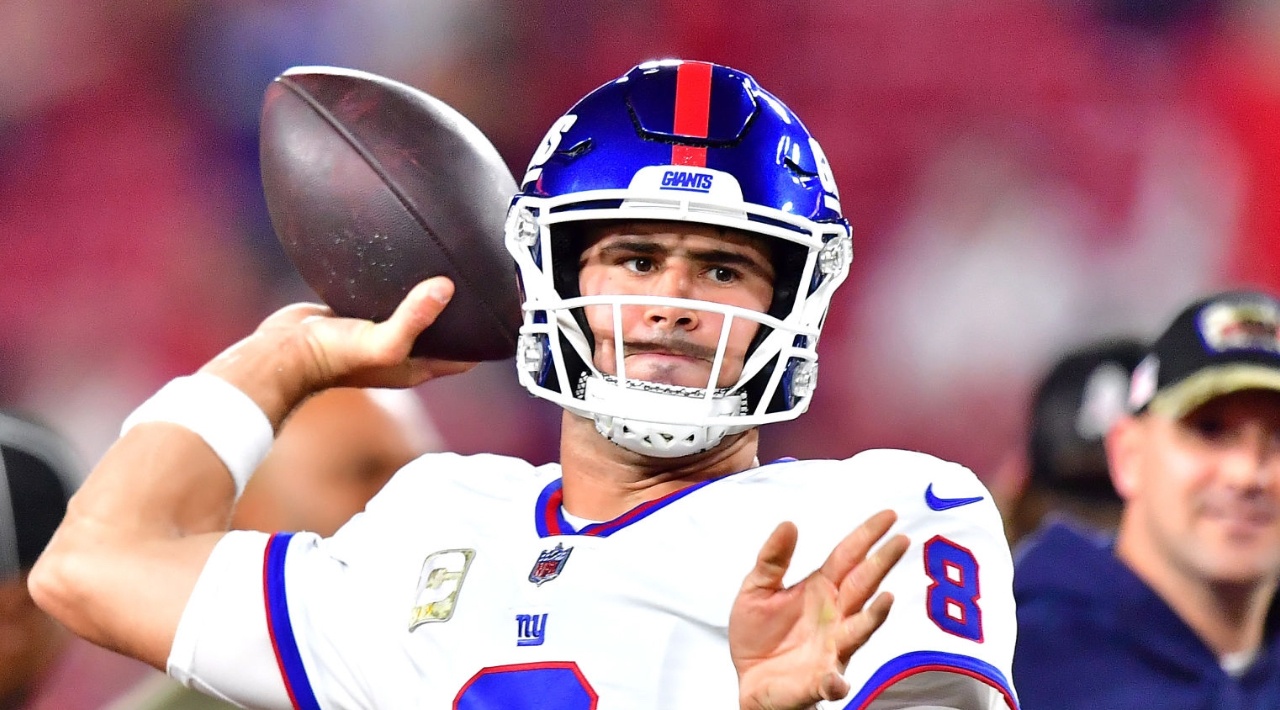 In the NFL news this Wednesday: Daniel Jones would not play in Week 13; Robert Griffin III to Publish Book on “Dysfunctional” WFT; Donte Jackson, out the rest of the year; and more. Don’t miss the NFL news.

Daniel Jones would not play in Week 13

Terrible news for the Giants heading into their Week 13 game. This Tuesday, via Tom Pelissero from NFL Media, it was reported that QB Daniel Jones would not play this coming Sunday against the Dolphins due to a neck injury he suffered last weekend when New York beat Philadelphia 13-7.

The report adds that Jones was designated as “week-to-week,” so his absence could extend beyond the game against Miami. Meanwhile, it will be veteran QB2 Mike Glennon who controls the Giants’ offense. Additionally, in a consistent move, New York signed QB Jake Fromm, from the Bills’ practice squad, to the active roster.

The Giants currently only had 52 of the 53 possible players in their active roster, so after incorporating Fromm they did not have to make any corresponding moves. Additionally, they also have QB Brian Lewerke in the practice squad so, between Fromm or Lewerke, there would be Glennon’s direct substitute this Sunday.

This season Jones has completed 232 of 361 passes for 2,428 yards, 10 TDs and 7 INTs. For his part, Glennon only accumulates 16 of 25 completions for 196 yards, 1 TD and 2 INT. The Giants (4-7), against all odds, still have hopes of sneaking into the postseason within the NFC, however, the radical quarterback change could end up affecting them too much. Could Glennon lead New York to their fifth victory of the season?

Over the past few seasons, the Washington Football Team has been one of the teams most involved in off-court scandals, and the situation could continue. This Tuesday, through a video published on his social networks, QB Robert Griffin III announced that on August 9, 2022 he will publish a book, together with sports writer Gary Myers, entitled “Surviving Washington”, where he will tell all the experiences he had within the franchise.

In the video, Griffin describes the book as an “explosive revelation” about “the shocking mismanagement and toxic culture within America’s most dysfunctional football team.” Additionally, Griffin noted that he will delve into the “medical mismanagement” of the knee injury that ended his great rookie season in a January 2013 Playoff loss, as well as information about the sexual harassment scandal that continues to plague the team. , and what he calls a “toxic environment” supervised by owner Daniel Snyder.

Griffin, who came to Washington as the No. 2 overall pick in the 2012 NFL Draft, won the Offensive Rookie of the Year award, but never managed to replicate his success. After spending three seasons with the WFT, he had periods without pain or glory in Cleveland and Baltimore, however, this 2021 he was not signed by any team and perhaps it could be said that his NFL career has come to an end. Will Griffin III be able to reveal verifiable events that will aid in the investigation of the Football Team’s work culture?

The truth will set you free.

Donte Jackson, out the rest of the season

Injuries keep invading Carolina’s roster. After it was reported last Monday that RB Christian McCaffrey will miss the rest of the season with an ankle injury, this Tuesday the Panthers made it official that CB Donte Jackson was placed on Injured Reserve due to a groin mishap. , further confirming that it will also be out for the rest of the year.

Jackson, who this 2021 has served as one of the team’s captains, suffered a groin injury in the second half of the previous Sunday’s game against the Dolphins. On Monday afternoon, he underwent an MRI that eventually clarified the seriousness of the mishap.

This 2021 Jackson has started in all the games played by the Panthers and registers a total of 2 INTs, 10 passes defended and 61 tackles. In addition, in his four seasons in Carolina, he accumulates a total of 12 interceptions, being the most of any player in the 2018 NFL Draft class. Additionally, it should be noted that at the end of this season he will become an unrestricted free agent, so his injury could be brutal in his aspirations for the search for a new contract.

Ultimately, his absence leaves the Panthers with Stephon Gilmore, AJ Bouye, CJ Henderson, Keith Taylor Jr. and Rashaan Melvin at the cornerback spot, and in a consequential move, to fill the gap Jackson left on the roster of 53, the team activated OG Deonte Brown (knee) from the Injured Reserve. How will this loss affect one of the best defenses in the NFL?

Good news for the Chiefs’ offense, who on Tuesday made it official that they activated OG Kyle Long from the Physically Disabled to Play list. Long had been designated to return to team training three weeks ago and the deadline to activate him back to the 53 roster was 21 days, so ultimately, with this decision, Kansas City is confident that the veteran guard can return to the field at some point in this last third of the season.

During the previous offseason the Chiefs signed Long in an effort to rebuild their offensive line after that disastrous loss to the Buccaneers in Super Bowl LV, however, last June, during OTAs (Organized Team Activities), Long suffered a mishap in the knee, for which he was placed in PUP prior to the start of the training camps.

An eventual return of Long could certainly boost the Kansas City offense. The 32-year-old veteran played for the Bears from 2013 to 2019, playing a total of 77 games and establishing himself as a 3-time Pro Bowler (2013-2015). The Chiefs signed him in March 2021, taking him out of retirement and now hope to see him on the field soon. Can Long make an immediate impact on the team’s offensive line?

In more NFL news, the league was dressed in mourning on Tuesday. Through a statement on their social networks, the Rams announced the death of RB Otis Anderson Jr., a former team player, at 23 years of age:

“The Rams are saddened by the sudden and tragic loss of Otis Anderson Jr. He was with us during training camp, preseason and started the regular season in our practice squad. He was a promising young man with a bright future. Our sincere condolences go out to his family during this difficult time. Rest in peace, Otis, ”the statement said.

Multiple reports indicate that Anderson was shot and killed by his own father, Otis Lee Anderson Sr., in Jacksonville on Monday night. Via the Florida Times-Union, the shooting occurred after a dog, belonging to Anderson Jr.’s girlfriend, bit Anderson Sr., and the latter became so enraged that father and son fought until the shooting happened. Denise Anderson, Anderson Jr.’s mother, was also wounded by a bullet in the mishap so she was admitted to the hospital although she has already been discharged.

Anderson Jr., a Central Florida graduate, had signed in the previous offseason with Los Angeles as an undrafted free agent. Later he passed the training camps and the preseason with the Rams, starting the regular season on his practice squad. However, the team decided to dispense with their services on September 20. For his part, Anderson Sr., 52, was arrested and charged with second degree murder.

The Rams are saddened by the tragic and sudden loss of Otis Anderson Jr. Our sincere condolences are with his family during this very difficult time.