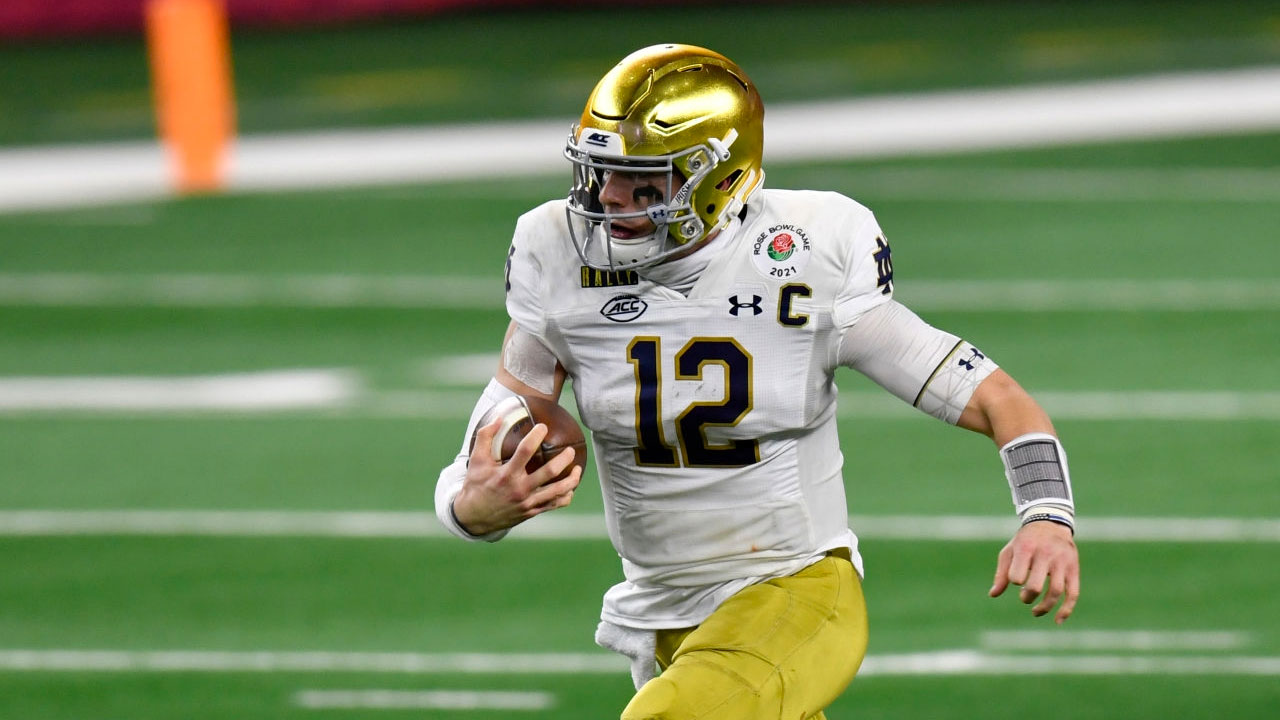 Ian Book would start at Week 16

In New Orleans they are preparing to play with their fourth different starting quarterback this NFL 2021 Season. This Thursday, via Ian Rapoport of NFL Media, the Saints placed QB1 Taysom Hill and QB2 Trevor Siemian in the COVID-19 Reserve. Therefore, everything indicates that for the next Monday Night Football Against Miami, it will be QB Ian Book, a graduate of Notre Dame, who will start the match.

Book, the Saints’ fourth-round pick in last April’s draft, has yet to throw a single pass as a pro in the NFL, but the narrative is about to change. The 23-year-old rookie is the winningest quarterback in Fighting Irish history and was 30-5 over three seasons as a starter at South Bend. He threw for 2,830 yards, 15 TDs and just 3 INTs in 12 games in 2020, his senior year in college, when Notre Dame made the NCAA Playoffs before falling to Alabama.

Thus, everything indicates that Book will be the fourth quarterback to start a regular season game for the Saints in 2021, and with a depth chart In the position that includes Jameis Winston, Trevor Siemian and Taysom Hill, next Monday’s game may be the only chance Book gets to show that he can become the future of this organization. What should we expect from Ian Book against the Dolphins defense?

From NFL Now: The #Saints are preparing to start Ian Book vs. the #Dolphins. pic.twitter.com/aDw0WYxcrt

The league is undeniably going through difficult times. The rate of contagion of coronavirus persists; this Thursday, via Tom Pelissero from NFL Media, 46 players landed in the COVID-19 Reserve, all by positive tests. With this figure, there are already 320 players who have been placed in the Reserve over the last two weeks, and although most have been asymptomatic or have registered mild symptoms, the numbers are historical, and as always, in this space We recap the most relevant appointments of the day:

What do you think about the COVID-19 contagion crisis that has gripped the league in the past two weeks? How would these casualties affect your respective teams in Week 16?

A total of 46 players (active roster and practice squad) placed on the COVID-19 list today. All positive tests. Here are the active roster additions. pic.twitter.com/3NQmYzyHKE

In Tampa Bay they wish the situation were not like this, however, the inevitable has become official. This Thursday the Buccaneers confirmed that both LB Lavonte David (foot) and RB Leonard Fournette (hamstring), who suffered their respective mishaps in the loss to the Saints in Week 15, were placed on Injured Reserve, By ending their regular season, however, the team hopes to win both players back for the Playoffs.

This season Fournette has participated in all 14 meetings of the Buccaneers, registering 180 carries for 812 yards and 8 TDs, in addition to 69 receptions for another 454 yards and 2 touchdowns. With RB Giovani Bernard also in the Injured Reserve, Tampa Bay was forced to reinforce its backfield and thus acquired the services of RB Le’Veon Bell.

For his part, in 12 games this season, David, a 10-year NFL veteran, has 97 tackles, 2 sacks, 4 quarterback hits, 2 forced fumbles and 3 passes defended. How will both casualties affect the Buccaneers heading into the end of the year?

Week 16 of the 2021 NFL Season began with the 49ers’ loss to the Titans, however, San Francisco not only lost the game, but also LB Azeez Al-Shaair. Via Eric Brach del San Francisco ChronicleAl-Shaair suffered a knee injury Thursday against Tennessee and will undergo an MRI on Friday to determine the severity of the mishap.

Al-Shaair exited the game in the third quarter and never returned. HC Kyle Shanahan confirmed after the match that it was a medial collateral ligament injury, however, the accuracy of the damage was unknown. The third-year linebacker, who had just returned to the team’s starting roster after missing the Week 15 game against the Falcons with a shoulder injury, may now be out for a longer time heading into the season finale.

This 2021 Al-Shaair has started 13 games, registering 102 total tackles, 1 INT, 1 forced fumble, 2 recovered, 5 passes defended, 2 quarterback hits and 2 sacks. How would this loss detract from the 49ers defense in their bid to make the postseason?

Ryan Kelly and the most relevant absences for Saturday’s games

In more NFL news, Week 16 of the 2021 season brings us 2 scheduled Saturday games. In the first instance, the Browns visit Green Bay at 3:30 pm; later, Arizona receives the Colts at 7:15 pm; both in Central Mexico time. However, several key elements of the four teams will not be able to participate in the stellar double card, and in this space, we review all the confirmed casualties so far:

Players discarded for the Saturday matches of Week 16:

How will these casualties affect your respective teams in Week 16? Which teams will prevail in these games with huge Playoff implications?