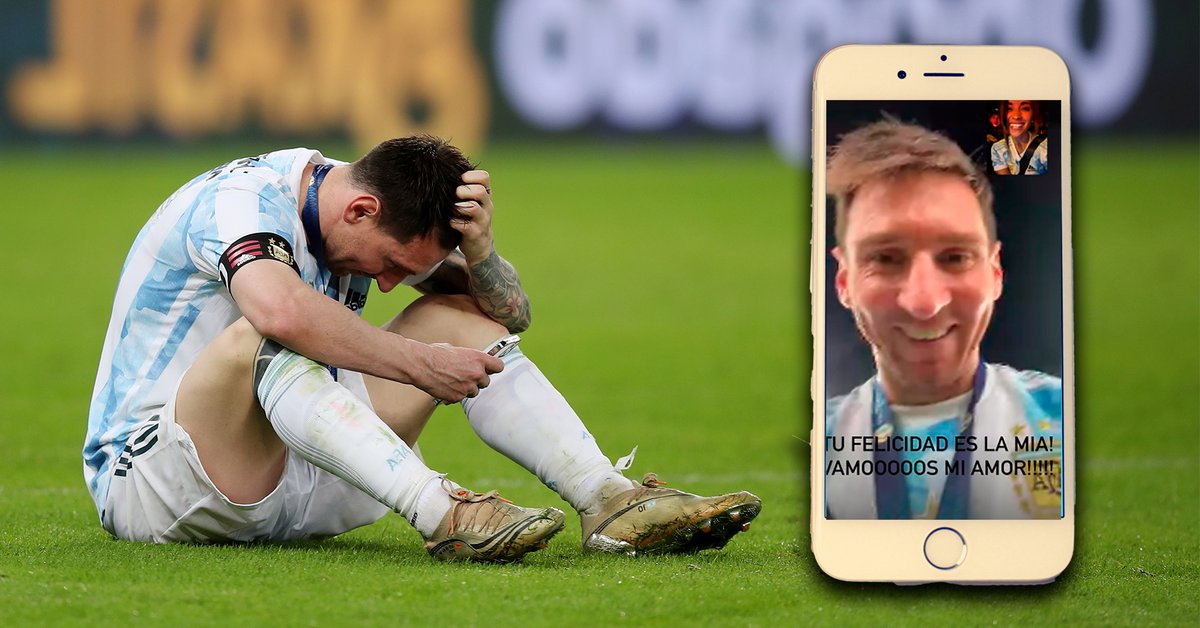 Messi’s video call with his family

Lionel messi It is the great symbol of the consecration of the Argentine team in the America Cup. The captain of the national team had a superlative level throughout the entire tournament and led the team to a title that was elusive 28 years ago. One of the most moving greetings the Rosario received was from his wife, Antonella Roccuzzo, who posted a message on his social networks.

Once the duel in which Argentina beat Brazil 1-0 -and while the television still showed the celebrations in the middle of the Maracanã playing field- Roccuzo published on his Instagram account: “WE ARE CHAMPIONS!!!!!! VAMOOOOS ARGENTINA !!! ”.

Then, he dedicated a few words to the father of his three children: “Come on my love !!!! Go!!! What you dreamed thisooo by Diosss at last it was given to you! As you deserve it. I can’t wait to see you and celebrate together!!!!!!! ”. In less than 15 minutes, this post received almost 700 thousand likes and tens of thousands of comments from the followers of the young Rosario.

Antonela’s dedication did not stop there: minutes later she published a video of her three children (Thiago, Mateo Y Cyrus) dressed in the National Team shirt and singing the typical verses of “Vamos, Vamos Argentina”. The two older ones close the song with a furious shout of “Come on!”, While the youngest is seen to be somewhat more timid.

The celebration of Lionel Messi’s children

But Messi’s demonstrations of affection towards his relatives were transferred to the Maracana’s field of play. After raising the glass and celebrating with his teammates, the Rosario walked away, looked for his cell phone and started making a series of video calls. He first spoke with his wife and three children, later he contacted his father, Jorge.

Lying on the grass, gesturing and waving towards the phone’s camera, smiling non-stop. Thus Messi left an image of the purest amateurism, still being the best footballer on the planet. In the most anticipated moment of his career, the Flea chose to share it – even at a distance – with those who always supported him, with their permanent support.

It was at that moment that the captain was able to slow down. Once he was done with his calls, he calmly walked to the locker room. On the access stairs to the dressing rooms he met Neymar -with whom he had already melted into a moving embrace- and with Leandro Paredes, and sat down to chat. Relaxed, he took off his shirt, exchanged it with his Brazilian friend, and kept talking.

At 34, Messi was consecrated in the 2021 Copa América in Brazil and achieved that title he longed for so much. Now is the time to think about that reunion with your family, at that moment when you will finally be able to hug them and let off steam after years of frustrations and postponements.

Messi emotional celebration after winning the Copa América: the special gesture of the squad and the hug with Neymar
Lionel Messi expanded his legend with the Copa América: who are the Argentine footballers with the most titles in history
Historical: Argentina beat Brazil and became champion of the Copa América