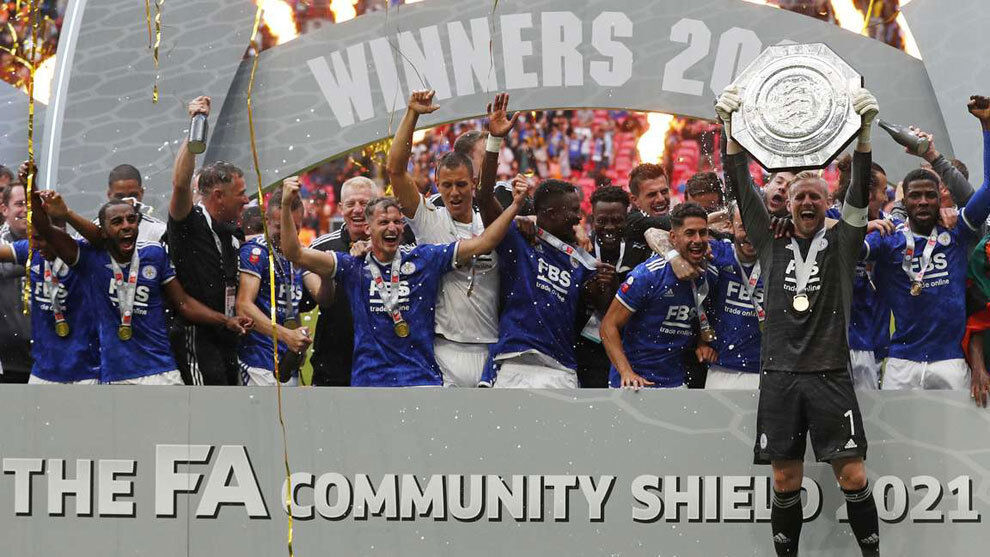 Leicester City have done it again. In 2015-16 he starred in the greatest feat that is remembered in the modern history of ‘football’ by conquering the Premier League, last season he surprised Chelsea to win the first FA Cup of his palmars … yhHe started the 2021-22 season defeating the ‘almighty’ Manchester City (0-1) to score his second Community Shield.

The ‘Foxes’ embittered Jack Grealish’s debut with City and are once again claiming their place in the ‘Big Six’. He decided Kelechi Iheanacho’s lonely goal in 89 ‘. Guardiola’s ex-pupil – they left the Etihad in 2018 – cooked it and ate it. The Nigerian ‘stole the wallet’ from Nathan Ak and ended up being shot down by the former Bournemouth. The referee Paul Tierney did not hesitate and Iheanacho did not forgive from 11 meters.

The final was by no means a show. Both Leicester and Manchester City presented two eleven circumstances, typical of the preseason. Guardiola, who could not yet count on the injured De Bruyne and Stones or the ‘internationals’ Sterling, Walker, Stones, Ederson and Gabriel Jesus, preferred to reserve Grealish, Rodri and Bernardo Silva from the start. The Portuguese was able to play his last minutes as ‘sky blue’. Instead, I bet on Ferran Torres from ‘false 9’ and the homegrown players Cole Palmer and Samuel Edozie as starters.

Brendan Rodgers also had to do ‘bobbin lace’. Before the losses of Castagne, Evans, Fofana, Justin and Mendy a defense was ‘invented’ with Ricardo Pereira, Amartey, Sync and Bertrand. He played it from the beginning with the Spaniard Ayoze Prez and he ‘saved’ for the second half to Iheanacho and the newcomers Soumar and Patson Daka.

There was a title up for grabs, but the Community Shield lacked pace … unsurprisingly. We must not forget that we are in August and that the Premier has not yet started. I will do it next week.

It didn’t take long, that is, for the first occasion to arrive. Kasper Schmeichel excelled to get a direct free from Gndogan out of the squad at 7 ‘. A poor clearance by Sync (16 ‘) and a high shot by Mahrez (19’) altered, albeit only slightly, the tranquility of the crowd that packed Wembley.

Leicester responded almost immediately. Ayoze Prez tried Steffen with a heel on 23 ‘and the American goalkeeper showed off to get a shot from Vardy at point-blank range on 24’. The City goal was the great name of the first half. At 45 ‘, with the time almost up, he pulled out a great hand to deflect a new attempt from Vardy to the post.

The change carousel was taking time away from a second part which began with a shot to the clouds by Gndogan after a left behind by Edozie (56 ‘) and a counter wasted by Mahrez under pressure from Ndidi (59’). The ex from Leicester couldn’t find a door.

In 65 ‘the most anticipated moment of the’ final ‘arrived. Pep Guardiola decided to introduce Rodri and Grealish. The most expensive signing in the history of the Premier (117 million euros) played on the left and left samples of his undeniable quality … but little else. Schmeichel, in 73 ‘, anticipated Ferran Torres on an occasion that could change the Community Shield.

The party, however, ended up opting for a pillage and a mistake. Ak fell asleep on his laurels after receiving from Rodri and Iheanacho stole a ball that ended up at the feet of Patson Daka. Steffen once again saved the heads up, but Paul Tierney ‘rewind’ the play to mark a penalty for Ak’s clamorous takedown of Iheanacho. The Nigerian, formerly of City, took responsibility and scored … although he did not celebrate it out of respect.

The Nigerian, who was already Pichichi of the FA Cup with four goals, gives the ‘Foxes’ the second Community Shield in history. The season does not start well for the City of Grealish and Guardiola.