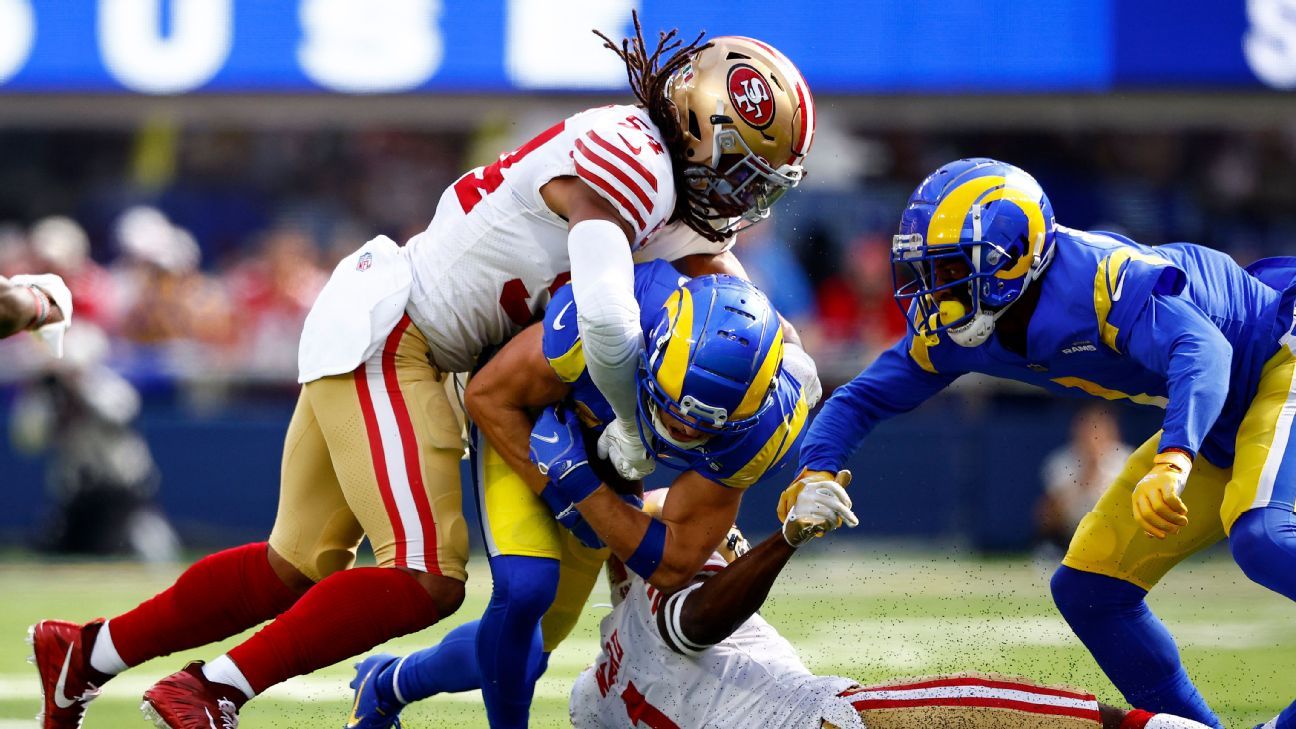 Here we are once again, following the feet and footsteps of the Latinos of the NFL in the 2022 season.

Something very important in every sports team, from the childhood stages to the professional ones, is that leaders are needed. Sometimes being a leader is something that develops as the player matures, perhaps depending on his position within the team – which may carry more responsibilities than others – and perhaps it evolves naturally because of his outgoing personality. .

Whatever the process of becoming a leader within a unit or a team, we can say without a doubt that fred warner he has become a leader on defense for the San Francisco 49ers, who selected him in the third round of the 2018 NFL draft.

Just look at his energy in the Niners’ timbac, cheering on his teammates for the game. His self-confidence is very contagious.

Fred Warner, who turns 26 this month, is an example to follow.

We continue with our task is to closely follow the 2022 season of Latinos on the grid, week by week.

This week, we select the linebacker of Panamanian and Mexican descent fred warner as the most prominent Latino. There is no doubt that he helped the San Francisco 49ers (4-4) to a resounding victory over the Los Angeles Rams (3-4) to snap a two-game losing streak.

Warner was key in defending against the defending champions’ run. He had a game-high 12 tackles, and the 49ers limited the Ramos to an average of just 2.7 yards on 21 rushing attempts.

In addition, Warner made one of the two sacks to the local quarterback matthew staffordas well as two quarterback hits, a tackle for loss and a pass defensed.

Warner — whose first name is Frederico — was pleased after the game in a news conference, “That was great. That was fun. … It’s always like a different game every time. … We knew we needed it.” We have a bye week (in Week 9), we didn’t want to go down 3-5.”

The linebacker elaborated on the defense’s strategy against the Rams, “It was a division game. So we went out and took care of things. … We made some adjustments in terms of coverage. … I think it’s like getting more on third down and favorable distances to be able to generate more pressure on third down. I think that’s what made Stafford uncomfortable and being able to get off the field, because we just couldn’t get off the field in the first half.”

This week we present to you: Natalia Dorantes (WAS)

In April 2021, the Mexican-American Natalia Dorantes she became a pioneer within the NFL. She was the first Latina female sports program coordinator to be hired by the Washington Commanders.

Dorantes comes from a family of immigrants, originally from Yucatan. She was born in Los Angeles, California and raised in Phoenix, Arizona.

It is symbolic and important that the trainer of the Commanders, Rum Rivera, of Mexican and Puerto Rican descent and one of the few Latino coaches in NFL history, is the one who gave him this opportunity. Latinos shake hands frequently. Of course, an offer of this caliber is only given — or should be given — if the person has made an effort to prove himself in his field and continues to show excellence, as is the case with Dorantes.

During Hispanic Heritage Month, Dorantes tweeted about the league’s efforts to celebrate player identity. His identity is an integral part of who Dorantes is.

Without a doubt, Dorantes is very proud of her Latin culture. Her tweet at the top of her personal page, from when she worked for the Texas A&M Aggies from 2017 to 2021, reads, “I embrace my culture and where my people come from. PROUD to be a daughter of immigrants AND a Latina in football.

I embrace my culture & where my people came from.

PROUD to be a daughter of immigrants AND a Latina in football 💃🏻🏈 https://t.co/lqfJToYl0m

The great news is that the number of women in different positions within the NFL is slowly increasing. For example, as the league tweeted, “There are now 15 women in coaching roles in the NFL, the most EVER in any professional men’s league in the world.”

This total of female coaches represents an increase of 25 percent compared to the previous campaign. In addition, the numbers of women are growing everywhere in the league with people like Sandra Douglas Morganthe new team president of the Las Vegas Raiders since July of this year… and as Natalia Dorantesrole model and Latino pride in the NFL.

How Latinos played in Week 8 of the NFL

Latinos who did not play in Week 8 of the NFL

the place kicker Rodrigo Blankenship still appears on the Arizona Cardinals’ active player roster, though Matt Prater he returned for the Week 8 game, a 34-26 loss to the Minnesota Vikings.

This past July, the kicker of Brazilian origin married the love of his life, Logan Harrell. Smitten, Blankenship recently posted on Instagram, “For the first time…Happy Birthday to my WIFE! Thank you for being the best a man could wish for. I love you! #MrsLenses.”

Latinos on Practice Squads in Week 8 of the NFL

This past Tuesday, the general manager of the New York Jets, Joe Douglas, spoke about the running back’s injuries Breece Hall and the member of the offensive line, Alijah Vera-Tuckerwho ended their respective seasons, “Our doctors are very optimistic that these guys are going to get back to full power.”

“Our docs are very optimistic that these guys are going to come back full strength.”

Latinos around the NFL in Week 8