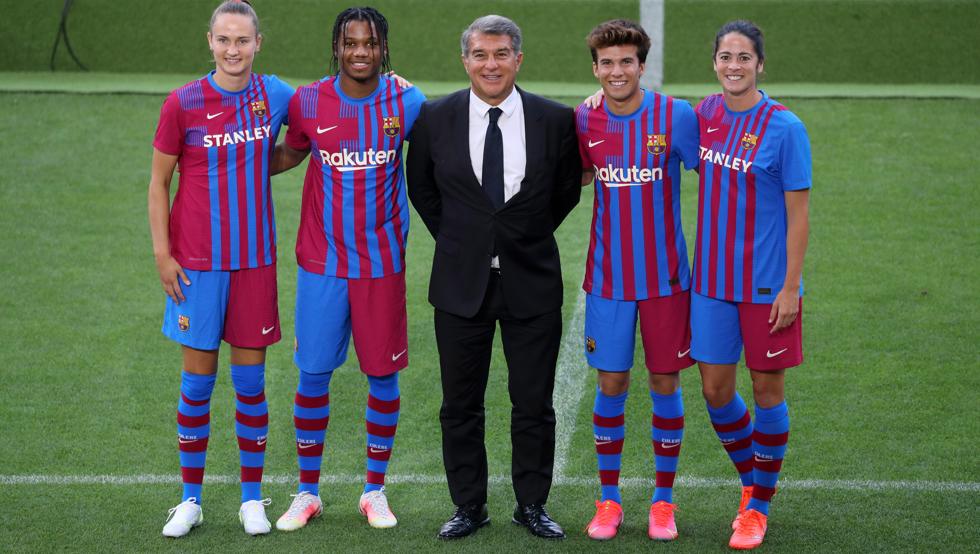 Joan Laporta The presentation of the new FC Barcelona shirt for the 2021-22 season has closed on the Camp Nou lawn. The president has not responded to questions from the media present about the club’s current affairs because it was not on the agenda and has limited himself to making a speech that closed a very original act, with rap, gospel and the star appearance from Ansu Fati, Riqui Puig, Caroline Graham Hansen and Marta Torrejón.


“All the Catalans who love Barça are proud of our club, our city and the country. It has been almost 122 years that Joan gamper With 11 friends he founded this club, half of them Catalan and the other of people who came abroad. They named the club after the city and also wanted to add the Creu de Sant Jordi and the senyera. And that has lasted until today ”, he commented Laporta, adding that “this shirt reflects all the pride of belonging to the club and the city and Catalonia … We are welcoming people who believe in equality, democracy, coexistence … Everything that makes us grow as a club.”

The president recalled that “we have a democratic property model, I have been fortunate to win the last elections, we place decisions in the hands of the partners.” And he boasted that “we have our own style and we like to win having the ball, pressing when we lose it, we always want to improve it because the culé is nonconformist, it is the style that he implanted Johan cruyffIt is non-negotiable and it is what we want for Barça, for Women, for grassroots football. And you and you have done it and you know it, Riqui and Ansu, from children in La Masia, or Caroline and Marta, this year winning the Treble sometimes against physically stronger teams ”.

Laporta concluded in the following way: “We always think that we can do better and that makes us grow as people, club and society. That can generate noise at times. I really like this shirt and thanks to Nike for this effort of imagination. Nonconformity makes us progress. The shirt is inspired by the shield and by everything that makes us one more club. and I hope that the members and fans will wear this shirt when they go to the Camp Nou, the Johan Cruyff or when they follow us around the world ”.