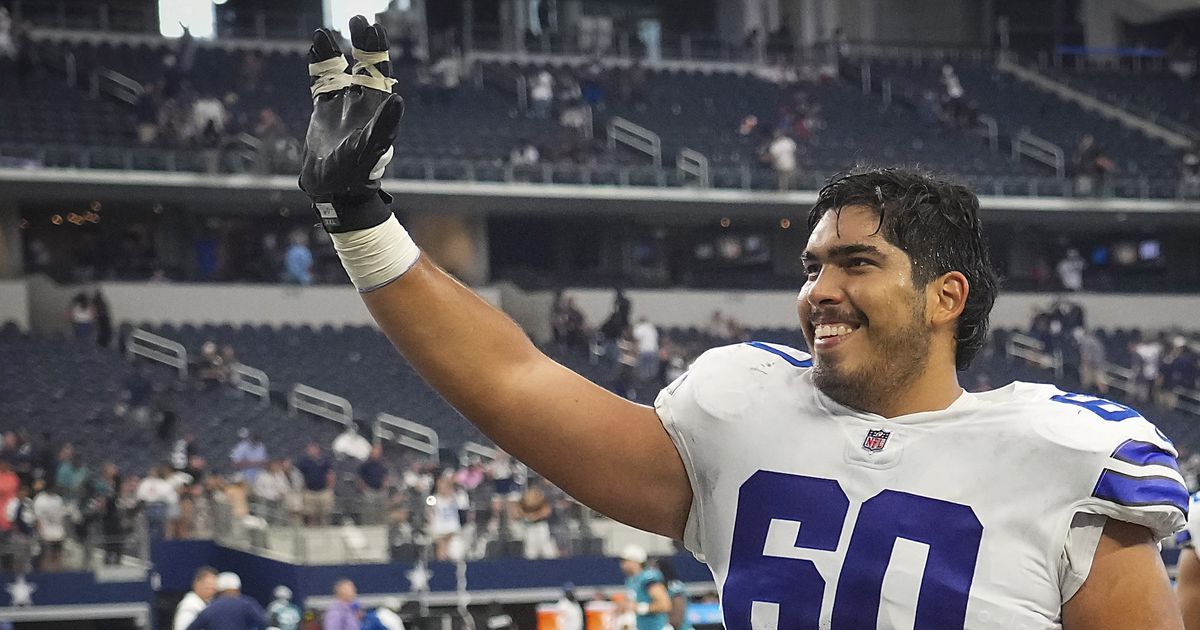 The Mexican Issac Alarcón can no longer hide in the shadows of anonymity. The Dallas Cowboys offensive lineman is now a well-known character.

The Monterrey native became one of the favorite players of the fans who closely followed the series Hard knocks.

During the five chapters of the production in which HBO documented the Cowboys’ preparation for the 2021 NFL season, Alarcón won the hearts of many fans in the now famous “cake scene.”

In that sequence quarterback Dak Prescott is seen receiving a birthday cake from some of his teammates.

At some point in the celebration, a Cowboys player smashed the yellow frosting cake in Prescott’s face.

Last week, Alarcón went to a Costco located in the city of Frisco, and as he was walking through the parking lot someone yelled at him: “Have you tried the cake?”

“It got me out of the loop, it gave me a bit of courage, but also a lot of laughter,” Alarcón said with a laugh during a telephone interview he gave to Up to date.

The 23-year-old came to the Cowboys in June last year through the NFL’s International Program.

Eighteen months later, Alarcón has evolved a lot as a player and this season he was assigned to the Cowboys practice team.

The Mexican said he has adapted very well to North Texas, where he rents an apartment with his older brother and is a minute from The Star, the Cowboys’ training headquarters in Frisco.

In the talk, Alarcón acknowledges that what he misses the most is Mexican food, that his favorite dish is cheese tamales with slices, that he reads the Bible every day and that he continues to study to graduate as an automotive design engineer.

“I wanna try the cake”

After watching Zeke and Dak fight with the QB’s birthday cake, OT Isaac Alarcon wanted to try it 💀
–
Hard Knocks: The Dallas Cowboys is streaming on @hbomax pic.twitter.com/WsfbN9q46H

This is the complete interview with Isaac Alarcón.

How you feel about getting a spot on the Cowboys practice squad.

Alarcon: Very grateful to God, the truth is that having a chair in this building is a blessing for me, so keep working and trusting that God wants the best for us.

Now that we are in Hispanic Heritage Month, how important is it to you to represent Mexico on such a great team in the NFL?

Alarcon: Híjole, because the truth is very proud to be given that honor of being able to represent my country, we always try to do it in the right way, put Mexico on high and thank God this opportunity is presented to me.

The NFL He announced that next month he will hold a camp in Mexico to look for talent. How many more Issacs Alarcón are there in Mexico?

Alarcon: I think there is a lot of talent in Mexico, I feel that I just got to the edge of the mountain and first, God, there will be more Mexicans who can be selected and who may even make it to the Pro-Bowl one day, so I feel that it is a very nice opportunity. for my country.

Do you realize that you have become a reference in Mexico within the NFL?

Alarcon: I try to stay focused, I hardly use social networks, but it is nice that God gives you the opportunity to help others.

Tell me about your adaptation to the city: Where do you live? Did you rent a house or an apartment? Is your family here with you? Who do you live with?

Alarcon: I live a minute here from where I train in Frisco. I live with my older brother, he is my representative. His name is Abraham and he is 24 years old. The hardest thing for me to get used to is missing the food. I really miss the food from Mexico, also the connivance that we have as Mexicans that on weekends it’s like ‘let’s get together’, but here it’s not so much like that, that doesn’t exist, and well, I have to get used to that.

When you arrived last year I asked you what places you had known in Dallas and you told me that Walmart. Have you already known something other than Walmart?

Alarcon: I already know Costco too (laughs). Notice that like this, a lot a lot, I have not gone out, but I have already gone to Fort Worth, I have gone to Dallas, to Plano, which is close here, I have had the opportunity to go fishing and things like that, but I do feel a little more adapted.

Have you already found a good restaurant Mexican food?

Alarcon: Notice that no. If you know one and can recommend it to me, I would appreciate it (laughs).

Apart from the Mexican flag on your helmet, there is some other element that you constantly carry with you. An amulet, a gift from your mother, for example, that will keep you spiritually close to Mexico and your family

Alarcon: Ahhh … mind you not. I do not carry any of that. What I did carry is with my brother, I took him away (laughs). Having my brother close has been important because anxiety can win you over or you can get depressed, so it is always very good to have that coexistence, that communion with my brother.

How did your life change after your appearances on Hard Knocks?

Alarcon: I don’t feel like it changed, maybe if I go out to do my errand there are one or two who can greet you, but I feel the same.

Tell me about your learning and your transition between tackle and guard?

In your position, what is more important, footwork or sleight of hand to protect your quarterback or to open holes in the line of scrimmage?

Alarcon: Both are very important because footwork helps you to stay in front of your rival and your sleight of hand is to not let your opponent send you back, so I consider that both are not very important to practice. If you ask me where I should improve, I would tell you that in my sleight of hand.

Give me the name of the person who has had the most influence on you since you came to Cowboys.

Alarcon: Hi, there are many who have given me a lot of advice and many who have helped me, but what I can tell you is that my anchor is my relationship with God. Without being religious, without being a fanatic, it is what keeps me well anchored, very humble, well focused.

You are a very different player than the one who came to the NFL a year ago, did you imagine how difficult and how different it is?

Alarcon: No, the truth is that I knew that it is a complicated game, but to measure the talent of the other teammates and all the challenges that were going to come, I did not imagine it. I did not grow up here, English is not my language, I do not have the preparation that other players have. They grew up competing in high school or college, they are adapted to playing in a stadium with over 80,000 people, not me. All of those things have been challenging and are still challenging today.

Your English is pretty good, don’t you think?

Alarcon: Well, there I take it, the accent does not go away (laughs). As I live with my classmates I am learning more.

Your studies, how are they?

Last year I took two subjects in the winter period, this year, God willing, I am also going to take two other subjects, and there I am taking her. Now I only have eight subjects to graduate, but two by two, because it will take me a while. I think I have another three years left at the university. What happens is that I only study in winter because during the season there is no time. Once you are in the season you want to dedicate one hundred percent to it.

Your favorite actor or actress: The Rock (Dwayne Johnson)

Your best friend on the team: I have quite a few, I won’t answer that one, several are going to be on me. (laughs)

Your favorite car: The F150 Raptor.