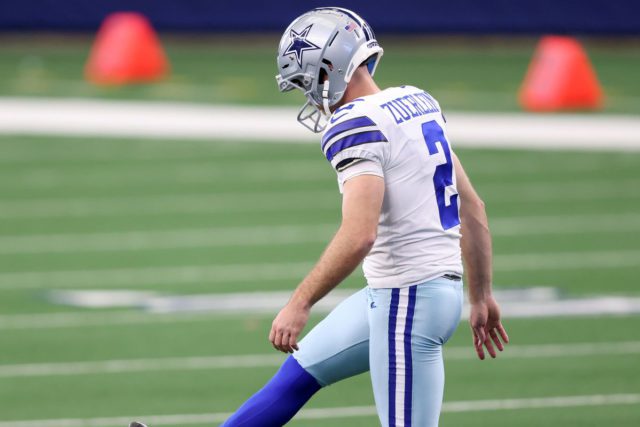 One of the positions the Cowboys need to address heading into next season is kicker. Greg Zuerlein showed that he is not an entirely reliable kicker, despite having the confidence of special teams coordinator John Fassel. Faced with this situation, the cowboy team has already made a move in this regard, hiring a young talent to serve as competition for “The Leg”.

This is Chris Naggar, a 24-year-old kicker from Arlington, Texas. Hailing from Southern Methodist University (SMU), Naggar entered the NFL in 2021 as an undrafted rookie. However, the young talent was backed up by a solid performance at SMU’s Pro Day before the Draft. There he scored two field goals of more than 60 yards.

Cowboys have made this move official. An Arlington native will compete with Greg Zuerlein for a kicker job in 2022. Zuerlein is entering a contract year. https://t.co/fcI0p2XZnd https://t.co/IpcmoWSJoh

Now let’s see their numbers. In the 2020 season with SMU, Naggar hit 43 extra points in 46 attempts (93.5% effectiveness). As for field goals, he hit 17 of 21 attempts (81%). Although his aforementioned performance at Pro Day drew attention, this did not influence him enough for him to be chosen in the 2021 Draft.

Despite this, Naggar entered the NFL with the Jets as an undrafted rookie. His stay with the New York team was short-lived, being released in mid-August 2021. Following this, the SMU product was signed by the Browns, who added him to their practice squad.

Then, in week 16 of the regular season, Chris Naggar made his NFL debut as a pinch kicker due to COVID-19 casualties on the Cleveland team. Against the Packers, the young kicker made his only field goal attempt in that game. However, he missed one of his two extra point attempts. Following this debut, the Browns released Naggar from the practice squad in late December.

Now, Naggar comes to the Cowboys on a reserve/future player contract. With this, the SMU product will officially join the Dallas 90-man roster beginning March 16, when the new league year begins.

Imagine being blessed with this name. SMU kicker Chris Naggar with the game-winner pic.twitter.com/WJviDVoB20

Zuerlein, among the worst in the NFL in 2021

With the addition of Chris Naggar, Greg Zuerlein will have a young contender for the job. This was an expected action, even more so after “The Leg” was among the worst kickers in the NFL in the 2021 season.

The section in which Zuerlein was worst was in the extra points, a task that is supposed to be “the easiest” that a kicker can have when it comes to adding to the scoreboard. In total, “Legatron” hit 42 extra points in 48 attempts, for an efficiency of 87.5%. This leaves him last among 24 kickers who had at least 1.5 extra point attempts during each regular season game.

On the other hand, on field goals his situation was no better. Zuerlein also ranks 24th in that category, this among the 33 kickers who had at least 0.75 attempts per game. In 2021, the Dallas kicker made 29 of 35 field goals, for an efficiency of 82.9%.

This close to Greg Zuerlein’s 59-yard attempt
via @NFL pic.twitter.com/M9Ts1HB675

But that is not all. If we compare Greg Zuerlein’s numbers in 2021 with those of the previous campaign, his performance has deteriorated. Although his effectiveness on field goals remained intact (82.9%), the same was not true for extra points. In that facet, Zuerlein’s shooting percentage dropped from 91.7% in 2020 to 87.5% in 2021. In fact, this is the worst percentage in “The Leg’s” career in that facet.

It’s true that John Fassel, Dallas’ special teams coordinator, admitted that Zuerlein’s problems were a product of back surgery he underwent last year. However, and although “Legatron” has Fassel’s full confidence, that does not justify his failures. Even less when those failures cost valuable points in close games that ended in loss, as happened against Las Vegas and Tampa Bay.

#NFLEnUniverse What an ugly kick!

Now that Zuerlein will have a contender for the job, the Cowboys will also have an opportunity to save money under the salary cap before them. Let’s remember that Zuerlein still has a year on his contract with Dallas, with a salary of $2.5 million. If the kicker is cut, the cowboy team will save $2 million. And looking at renovations and other pending expenses this year, those savings would be valuable.

For now, it remains to be seen if Chris Naggar makes the case for Greg Zuerlein’s job as Dallas’ kicker. Likewise, it will also be necessary to see what the Cowboys’ priority ends up being: having an efficient kicker, or continuing to trust Zuerlein even though his performance is deteriorating. Logically, the cowboy team should prefer the first option. However, we will have to wait a few months for the answer.

Greg Zuerlein already has a competitor at Dallas’ kicking spot