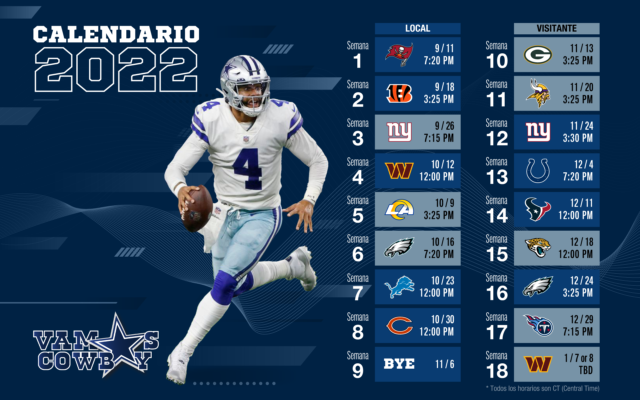 The dates and opponents for the Dallas Cowboys in 2022 are out and there are several curiosities that will result in advantages and disadvantages for the cowboy team.

This is the second NFL season with 18 games, and this year the NFC will have 9 home games and 8 road games. Based on last year’s results, Dallas will have the easiest schedule in the NFL this year. Their opponents had a combined record of 133-155-1 in 2021, a stat supported incidentally by having 6 of 18 games against the NFC East.

A schedule can create various advantages and disadvantages for a team. Today we are going to look at some of the news on the calendar.

In Week 13, the Cowboys will face the Indianapolis Colts and there is something quite interesting about this matchup. The Cowboys will enter this game on 10 days’ rest, as it is the game after their annual Thanksgiving game.

However, the Colts won’t have the same luck. They will have a cut week, playing the previous week against the Steelers on Monday Niger Football.

It is very rare to find a game where one team is a week short while the other has 10 days off. The record of the teams playing with that handicap historically it is very bad, as it is something very difficult to overcome.

But it’s even worse than that for the Colts. His game against the Cowboys will be in Dallas. So not only do they have a week with little rest against a team with a lot of rest, but they will have to travel as well.

In Week 7, the Cowboys will face one of the worst teams of 2021 – the Detroit Lions. Although Dallas will have the game at home, they will play after a tough game in Week 6 against the Eagles. That game in Philadelphia will be the second of two straight road games.

Although Dallas will return home after its battle in Philadelphia, Detroit won’t have the same problem. Instead, the Lions have their bye week in Week 6. Therefore, the Cowboys will face a rested team with two weeks to prepare for the game.

Advantage: Dallas will have 3 of its first 4 games at home

The Cowboys start the season with two formidable opponents, Tom Brady’s Buccaneers and Joe Burrow’s Bengals. However, the Cowboys will play both games at home. Afterwards, they will play in New Jersey against the Giants and then return home to face the Washington Commanders.

If the Cowboys can start the season well, they’ll have a big lead. After Tampa and Cincinnati, the record for the rest of their 2021 opponents combined is 110-144-1 (42.9%). Therefore, the NFL presented Dallas with a great opportunity. With the first 2 home games and 3 of the first 4, if Dallas can beat two strong opponents, it will have a chance to gain the momentum that can carry them to another NFC East title.

Cowboys Schedule Updates for the 2022 Season