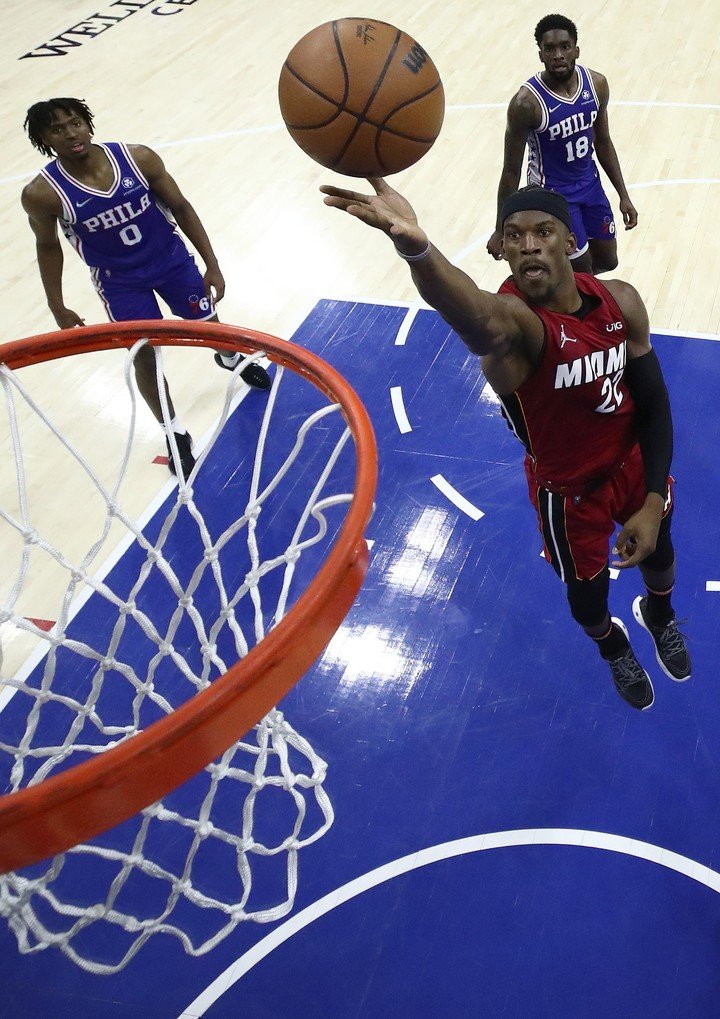 Sensational one more night, Jimmy Butler led the Heat with 32 points, 8 rebounds and 4 assists.yes Max Strus also stood out (20 points, 11 rebounds and 5 assists) in a Heat team that made 48.3% of their shots and crushed the Sixers in the fight for rebounds (49 to 35).

Butler was instrumental in Miami’s victory.

Joel Embiid (20 points and 12 rebounds) and Tyrese Maxey (20 points) were the best of the Sixers in which James Harden’s laziness drew attention. The great signing of the Sixers, who came to Phila with the clear objective of fighting for the ring, closed the decisive game of the season for his franchise with 11 points (4 of 9 shots), 4 rebounds and 9 assists. The most surprising and commented after the meeting was that Harden only shot twice at the basket – and missed both attempts – in the last two quarters.

With his mask on, Embiid covers his face from the pain of being left out with his Sixers.

The Sixers fell for the fourth time in the past five years in their conference semifinals.a, although this time it can be even more painful since they have missed the best course in Embiid’s career so far. The Cameroonian center was very close to the MVP, who in the end Nikola Jokic won for the second time in a row, and averaged 30.6 points, 11.7 rebounds and 4.2 assists per game in the regular season. In addition to the elimination, the night left another very bad news for the Sixers with Danny Green’s knee injury after a horrible fall.

For its part, the Heat will face the winner of the semifinal between Milwaukee Bucks and Boston Celtics in the Eastern final now dominated by the reigning NBA champions 3-2. Miami has reached the final of its conference twice in the last three years and this season it seeks to make up for the ring it lost in the 2020 bubble against LeBron James’s Los Angeles Lakers.

The Mavericks pararded the series to the maximum.

Luka Doncic got his first big victory in an elimination game on Thursday. The young Dallas superstar scored 33 points and the Dallas Mavericks crushed the Phoenix Suns 113-86 to force a Game 7 in the Western Conference semifinal.

The host team, whoever they are, have won all six games in this series, none by a margin of less than seven points. The decisive duel will take place on Sunday in Phoenix.

The Mavericks won a game in which they were in danger of being eliminated for the first time, in three tries with their star Doncic. Both losses came to the Los Angeles Clippers in the previous two seasons, including Game 7 in Los Angeles last year after the visitors had won the first six games, a first in the playoffs. Dallas got past the first round of the playoffs for the first time since winning the title 11 years ago, with now coach Jason Kidd as the point guard for that team.

Doncic and his joy. Will she have it on Sunday?

The Suns, seeking a second straight trip to the West finals, have gone as far as possible in a series for the first time in two postseasons with Chris Paul and Devin Booker in their ranks. In their previous three series, the Suns have played six games, including last year’s Finals, in which they lost to Milwaukee. Booker scored 19 points but missed all four of his 3-pointers. Deandre Ayton had 21 points and 11 rebounds and Paul had 13 points.

NBA Playoffs: the Heat are finalists in the East