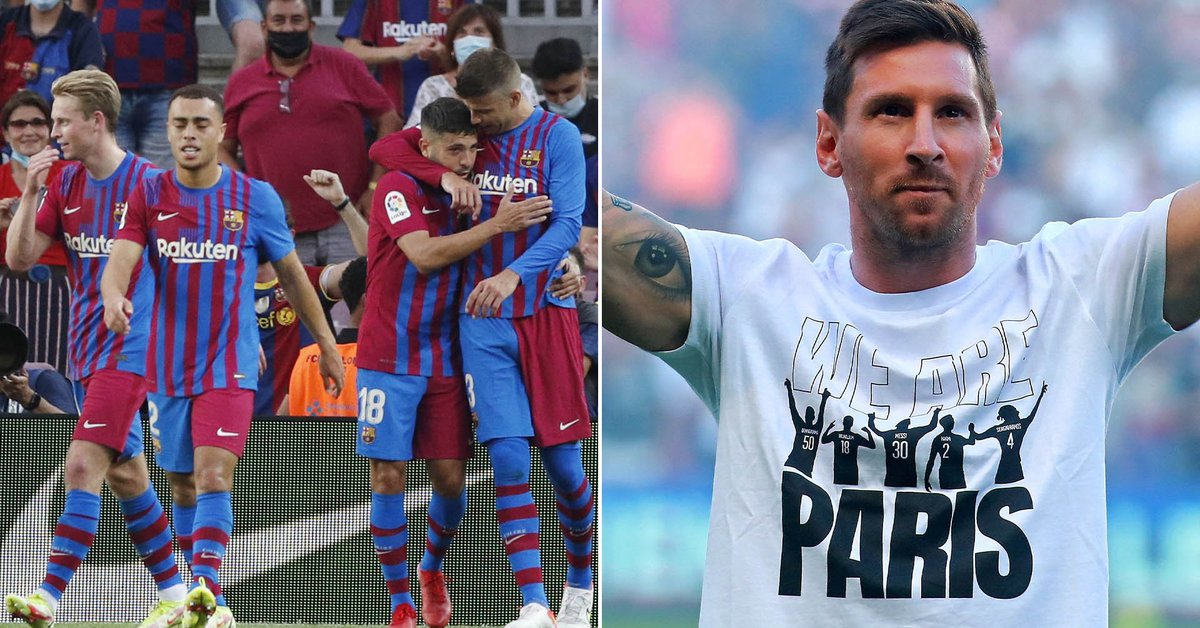 In the middle of a strange climate at the Camp Nou, Barcelona overcame the first hurdle of the post Messi era: defeated 4-2 at Real society at its premiere in the Spanish League. Gerard Piqué, Martin Braithwaite (2) and Sergi Roberto they covered the absence of the idol with goals. They discounted Julen Lobete and Mikel Oyarzabal, from a free kick.

But beyond the result, and as had happened against Juventus for the Joan Gamper trophy, those led by Ronald Koeman exhibited an interesting performance, with extended pressure to suffocate their adversary and high-level individuals, such as Memphis Depay and the Dane. Braithwaite.

In the stands and outside the stadium, the image of Messi’s absence was omnipresent. It is that the 34-year-old striker left for PSG after Barcelona did not renew his contract, despite the fact that he had agreed to reduce his income by 50%. The leadership, headed by Joan Laporta, blamed the inheritance received from the Bartomeu administration and the restrictions imposed by the Spanish League for financial Fair Play.

Although La Pulga did not go to the clash publicly, privately he had the doubt as to whether Laporta and company did everything possible not to cut the link. “Laporta had said that everything was settled, but we could not reach an agreement for La Liga. There is no more than that. I am clear that I did everything possible to stay “Leo said a week ago, at his fired press conference.

Well, in the first official match without Messi, there were flags in the vicinity of the Camp Nou accusing the president. “Laporta, Florentino’s lackey”, “Laporta Judas, you cheated on D10S”, “Barça is not your business” or “Messi in Paris and you in Ibiza”, prayed the legends that transcended in the networks.

In the 10th minute (the number used by the former captain) against Real Sociedad, the more than 20,000 spectators expressed themselves. The fans of the blaugrana exploded to the shout of “Messi, Messi”, while others reacted with whistles, surely aimed at the current leadership and others with applause, in tribute to the Argentine striker who became a legend for the institution. In addition, several fans raised their shirts with the 10 of La Pulga, in a gesture of recognition for the star.

But Barcelona won with force and, through social networks, launched a challenging message. With a picture of the scorer Braithwaite as an illustration, the Twitter account in English signed “We are Barça ”. What could it suppose a simple declaration of principles, if what happened in France, 24 hours before, were not taken into account …

In the Park of the Princes, in the previous PSG’s 4-2 victory over Racing Strasbourg, Messi was presented to the public, in an event with all the passion and glamor. Together with him, all the club’s reinforcements also stepped onto the pitch, wearing a jacket with the phrase “We are Paris”.

“We are Paris”: the legend on the PSG reinforcements jerseys, who prompted the suggestive message from Barcelona (REUTERS / Sarah Meyssonnier)

A gesture of spite with the top scorer and the player with the most presence in the history of Barcelona? Or a challenge to Paris Saint Germain, which kept its emblem and, with names like Mbappé, Neymar, Sergio Ramos, Di María and Donnarumma threatens to destroy the European football season?

He was champion with Maradona in Boca, he worked as a translator for Gallardo in France and told unpublished details of the Messi revolution at PSG
Who is Bob, the shadow of Lionel Messi in his early days as a PSG player
Similarities and differences between Maradona and Messi after being thrown by Barcelona
The drastic decision of Antonela Roccuzzo with Barcelona after the arrival of Lionel Messi to PSG