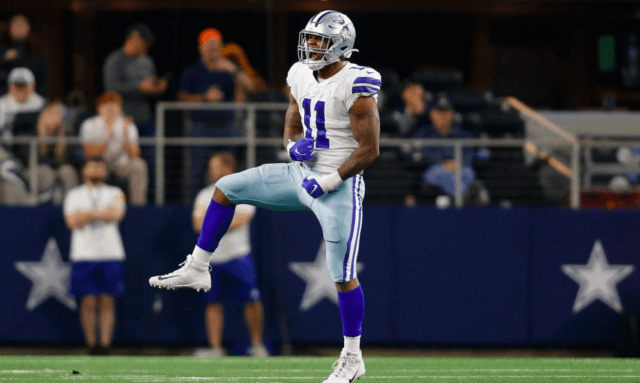 The qualifications have to do with each positional group. Perhaps a somewhat lower grade like a B+ might have been more appropriate by averaging that entire area. However, Micah Parsons’ influence on the defense’s turnaround is so important that it raises the evaluation. The rookie was not only the best on the unit, but the most outstanding player on the entire roster by a pretty clear distance.

Individually, there is no doubt that he would have obtained another. In that direction I would not lower the A+. Both he and Dan Quinn were the architects of a resounding modification in just one season. Extra credit should also go to cornerback Trevon Diggs. But going back to the linebacker, it’s enough to keep in mind that his numbers defied some historic NFL records for a rookie.

Cold stats are completely dominant. In sacks he finished sixth with 13 even though he split snaps between MLB and defensive end at times. If he had been used exclusively at the line of scrimmage he surely would have gotten more. What has been achieved is still an impressive record.

Although when complementing that item with other relevant ones, its production becomes elite. Since he was drafted, it was known that the main reason was his ability to pressure the quarterback. That was seen in the 30 QB hits he totaled to finish fourth. The three above him are three excellent pass rushers in TJ Watt, Myles Garrett and Nick Bosa.

His ability to disrupt offensive plans was also seen in the run defense. With the 20 tackle-for-losses he made he was only slightly bettered by Watt and Bosa’s 21. It bears repeating that he didn’t even spend the entirety of his snaps pressing. For that reason he averaged 20-30 more tackles than those valuable edges.

Acknowledgments may not be as descriptive in some instances. The Pro Bowl for example became a popularity contest. However, being mentioned in the first team All-Pro is something very prestigious because it indicates that you were the best of your position in the entire NFL. The Penn State graduate was the most elected, obtaining 46 votes out of a possible 50.

Another distinction he received was Defensive Rookie of the Year. Parsons’ performance was so evident that this award turned out to be the only one awarded unanimously. While he was a long way from Watt for Defensive Player of the Year, he finished second to three-time winner Aaron Donald.

The rest of the linebackers made quiet contributions. They weren’t as influential with such impact actions, though they did add some solidity and depth. Leighton Vander Esch finished third in tackles, but the surprising thing for good is that he completed 17 games. While he’s a reliable piece in the rotation, that hole could be improved.

Keanu Neal’s presence was somewhat lackluster. Neal signed a $4 million, one-year deal in free agency to move full-time from safety to LB. He lost some ground due to injury after a good start. An issue that was far from the calendar is that Jaylon Smith had to be cut due to his constant poor level.

Yes. One reason Parsons was so influential to the Cowboys is the variety of lineups in which he competed. For him to continue to be a chess piece that offenses must guess where he’ll attack from requires consistent linebackers in traditional placement. For now, the other member under contract that completes that sector is the fourth round pick in the 2021 draft Jabril Cox.

Dallas is forced to add linebackers because veterans on the depth chart end their ties in March. Vander Esch will ultimately become an unrestricted free agent after the fifth-year option was dropped. The price remains to be seen depending on the demand it has, but his contribution does not merit a large investment.

Neal is another veteran who will be able to choose his path when the new season begins. The 4M destined for him will not be repeated as there are other more important needs or alternatives. The remaining elements are special teams contributors like Francis Bernard and Luke Gifford, so they wouldn’t be irreplaceable losses.