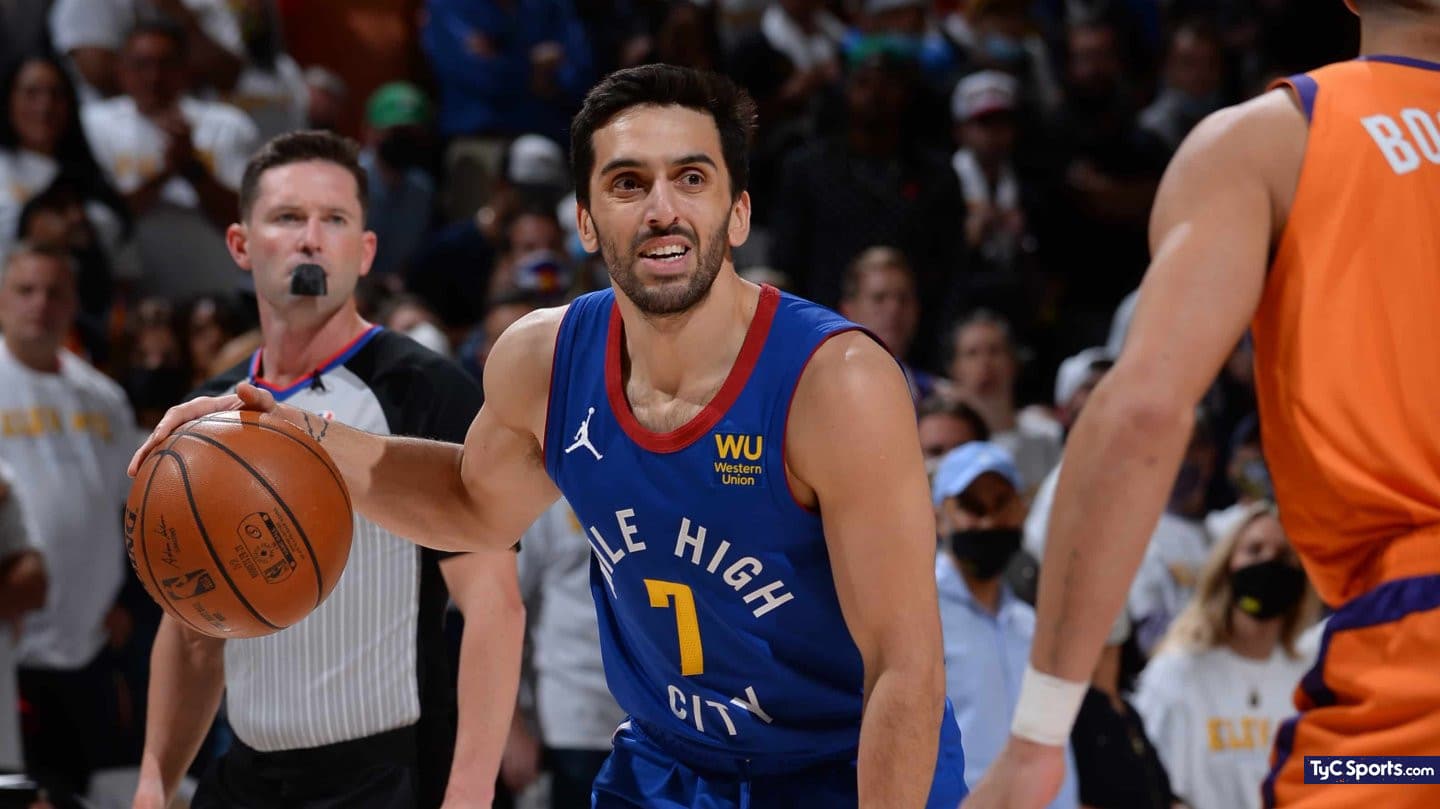 The Argentine team fell at home to the Phoenix Suns in the third game of the Western Conference semifinal series. The Nuggets are 3-0 down and if they don’t win on Sunday they will be out of the running.

With Facundo Campazzo on the court from the start, Denver Nuggets lost again to Phoenix Suns by 116-102 in the third game of the semifinal series of the Western Conference of the Playoffs and was on the brink of a sweep. The Argentine team was widely outclassed, is 3-0 down in the tie and if he does not win on Sunday he will be eliminated.

The Suns were the clear dominators throughout the entire game at Ball Arena. The best moment of Michael Malone’s was the second quarter in which they narrowed the distance and the Argentine even showed off with two triples and two rebounds in 18 minutes on the court, but in the second half the visit put an end to all the illusion of the Nuggets, who never achieved a strong defense.

In the first five minutes of the third quarter, the Nuggets only made one shot from the field, although it was on defense that they showed their worst side. Chris Paul, with 27 points and 8 assists, and Devin Brooker, with 28 points. For his part, Jokic was the local figure with 32 points, 20 rebounds and 10 assists.

The Suns now need a win in next Sunday’s game, from the 21 in Argentina, to close their passage to the final of the Conference. The Nuggets will bet on a win that stretches the definition, but their outlook is very complicated as a team never managed to come from a 3-0 aggregate victory.

END OF THE MATCH!

The visit wins 111-94 and Denver seems to have no reaction.

Great play by Jokic that topped off with assist

Again the Serbian showed off in an action that ended with a pass to Will Barton. Jokic is the great figure of a lackluster Denver.

Great play by Jokic that topped off with assist 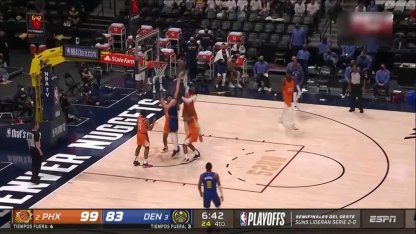 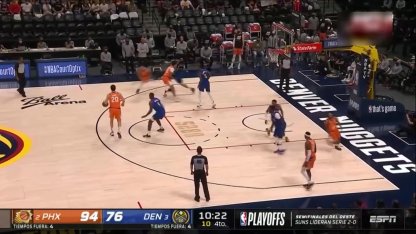 The last period is played.

END OF THE THIRD QUARTER

Phoenix Suns closed a great third period and won it 90-76.

With assists and points, the Serbian, brand new MVP, is the hope of the Nuggets. 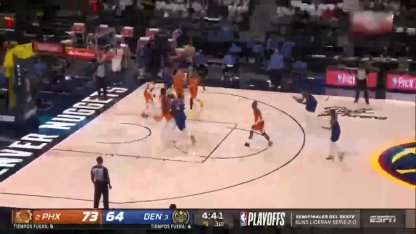 The visit is rebuilt after a difficult second quarter and he wins it 69-58.

Denver Nuggets improved and finished four points behind the Phoenix Suns who win it 59-55.

The Argentine scored again from three, discounted for Denver and made the game 49-55.

Campazzo scored again from the line of three 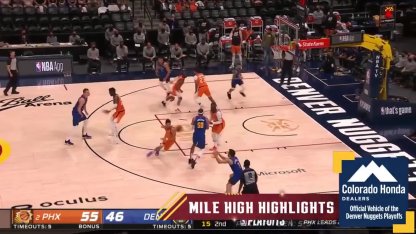 Campazzo discounted with a shot of three 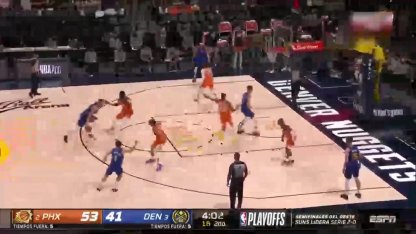 The Serbian jumped and fell sore from a sprained left ankle. For now he is testing and is still on the court.

Jokic bent his ankle and was sore

Phoenix still ahead of the Nuggets 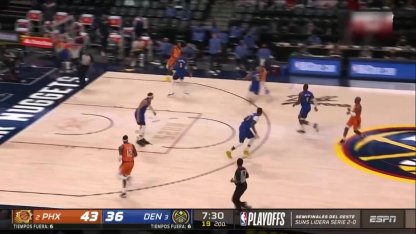 Denver started discounting and now the Suns are leading 37-30.

END OF THE FIRST QUARTER

The MVP begins to shine and leads the Campazzo team that is behind 25-15.

Jokic showed off with a eurostep 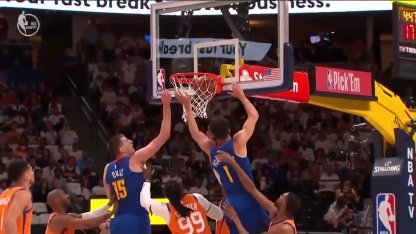 After a poor second game, Porter Jr. started with a good shooting percentage of three.

Good start for Michael Porter Jr. in the Nuggets 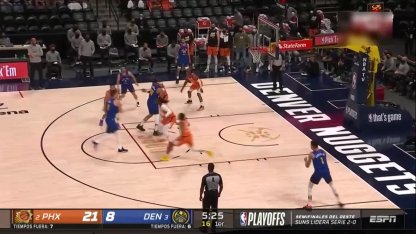 The Argentine was wrong in attack and Devin Brooker took the opportunity to convert from three. 11-6 Suns win.

Booker took advantage of the loss of Campazzo 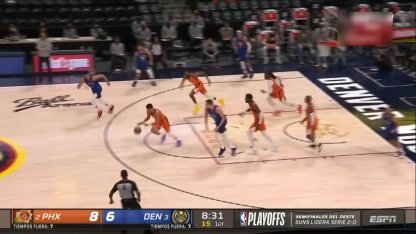 In the run-up to the match, the Serbian was presented with the trophy he won as Most Valuable Player of the season.

Jokic received the MVP award in the preview 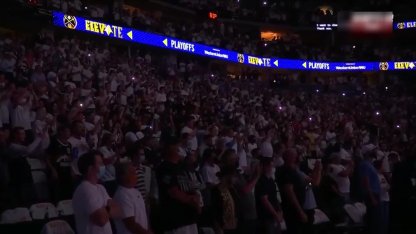 In a few minutes, the game that will be key for the Facundo Campazzo franchise that he will seek to discount in the series will begin.

The Phoenix Suns’ five to play the Denver Nuggets

Chris Paul, Devin Brooker, Mikal Bridges, Jae Crowder and DeAndre Ayton are the five who will try to put the series 3-0 in favor of the visit.

The Serbian will be presented with the MVP of the season award in the run-up to the game. 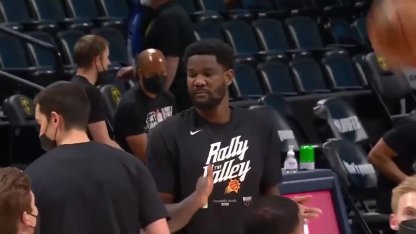 CAMPAZZO WILL BE FROM THE START BEFORE THE SUNS!

As is customary, the Argentine will start the game with Nikola Jokic, Michael Porter Jr., Austin Rivers and Aaron Gordon.

Good news for the Denver Nuggets

Michael Porter Jr. warms up without back protection, an indication that he would be fit to play.

The Ball Arena is now ready for Denver vs. Suns

The stadium where the Nuggets are home is awaiting the start of the game.

Campazzo and his teammates began the pregame moves. 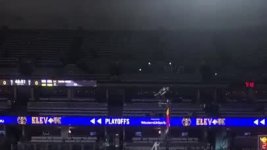 Campazzo will have Argentine support at the Ball Arena

A group of compatriots from Cordoba approached the stadium to encourage the Argentine and witness Denver Nuggets vs. Phoenix Suns.

Argentines present at the Ball Arena to support Campazzo 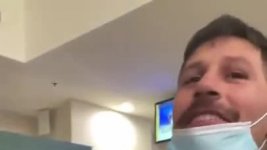 Denver Nuggets arrives with a loss and a doubt

Michael Porter Jr. was listed as questionable for a sore back while PJ Dozier remains out with an adductor injury.

Campazzo and the Denver Nuggets are already at the Ball Arena

This is how the Argentine base arrived in the pre-game against the Suns.

Campazzo’s Denver, before a key game against the Suns

The Argentine team will face Phoenix at home for the third game of the Western Conference semifinals after having suffered two defeats. They must win so as not to be on the brink of elimination.