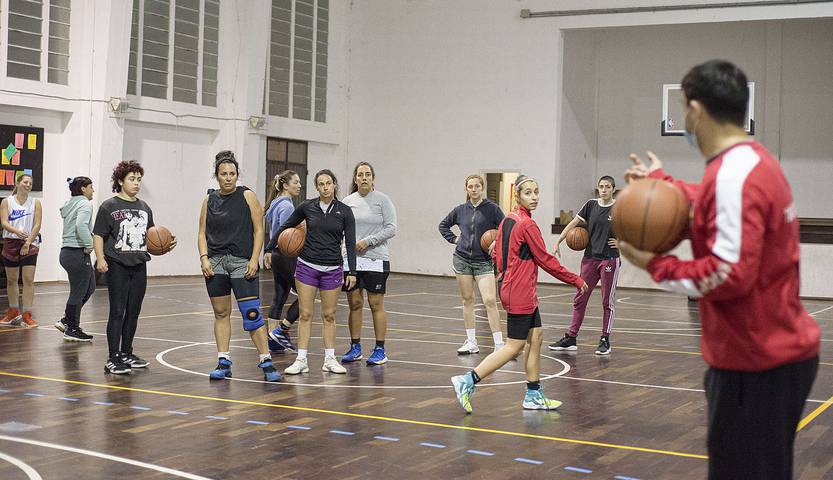 Since April 1922, basketball has been played in one of the traditional teams in Pocitos. The picture arose in the Trouville square, there was born “the first club in the neighborhood and one of the institutions with the most history of Uruguayan basketball”, as defined.

The red ensemble forged the feeling of belonging and the identity of this area of ​​Montevideo. But there was no room for some people. Starting this year, in the Women’s League Basketball (LFB), Trouville has a women’s team.

With Gastón Silva as coach, Pablo Morales as assistant, Daniel Uthurburu as physical trainer and psychologist Lucía Proverbio, a female team from Trouville took the field for the first time. Never before, in any category, has a full team of women represented the club in this discipline.

The coach was finishing directing Deportivo Paysandú in the 2020 LFB when he arrived in Trouville to direct the training sessions. Left the Paysa to focus on this new challenge, and at that moment Pablo Morales (club coordinator) proposed adding another: he wanted to create the women’s team, which he had been crafting and planning for a long time.

Between them they called some players they knew and in turn, as it was confirmed that Paysandú would not participate, several players from there emigrated to this new team. The roster was put together quickly and currently consists of 20 players.

To prepare they train six hours a week, divided into three days in which they do physical, individual technique work and then share a space with the sports psychologist, in addition to the classic training on the court.

The team is very motivated and prepared, but above all with a lot of desire. “There is a great work team and the gurisas are very committed; I think the club tries to give them the maximum so that they only worry about coming to train and play, ”Silva said.

There is still much to do and grow because, among other issues, the girls who make up the campus must pay the social fee to participate, with which they pay for the work of the coach, teacher and psychologist.

They have managed to get supplies necessary for the day to day. Through sponsors that they got themselves and others that the club agreed, they agreed, among other things, to two teams, the starter and the alternative, with a sweatshirt and kangaroo. With that, plus the good collective work, they were planted on the field to play their first tournament.

The Uruguayan Basketball Federation is working to promote, empower and grow discipline in the women’s branch, so they support as much as possible. “This year, federative expenses, for example, are paid for. It is good and encourages more clubs to join, that the female team is not an expense but an already covered tournament, other expenses are assumed that are not the responsibility of the federation ”, explained the coach.

Institutionally, for this first presentation, the team has a clear objective: to consolidate within the LFB. “We want it not to be a one-year project and that’s it. Luckily we already have a small school full of girls and we hope to be able to add formative categories in the medium term. Later, in the tournament, go out to win all the matches and leave Trouville as high as possible, ”Silva said.

This approach to the team is possible because, although it is made up of some young basketball players who want to make their way, most of them have been playing for a long time, especially those who come from Paysandú. “I think the most important thing is to finish united and being a team both on and off the court,” said DT.

For their part, the players consider that to be the first year a great human group was forged. “We all get along very well and little by little we get to know each other on the court. It is not an easy task, but we work very hard during the week to grow each one individually and thus be able to take it collectively, which is a very important factor, ”said Florencia Canabal.

They had been preparing for some months, so at the beginning they arrived with practice and very anxious. Trouville won its debut against Montevideo 56-30. “We started by winning our first game, applying what we had been training, because luckily this year there is a very competitive league,” Canabal said. In the following games they have accumulated four defeats.

The idea they have as a group is to set short-term goals, “game after game we will go for more, and that is also thanks to the support and trust that Gastón gives us as a coach, Pablo Morales ‒ who also trains us once the week helping us a little more in individual technique‒ and Lucía, our psychologist, who is always there to the fore, working with each one of us and with the entire team. We are very happy with the team that was formed, and working very hard to get to know each other more on the court and that the game becomes more and more fluid, “he concluded.

Although Trouville had never had a women’s basketball team before, the first player to officially debut with the club’s jersey was Victoria Cantero, in a training match in mixed categories, in which boys and girls play interchangeably. He did so on May 3, 2013.

Victoria left Trouville to play for Bohemios when she reached the U16s, as Red had no women’s team and formative basketball in the larger categories comprises the division between men and women. He is currently playing the LFB in Bohemios.