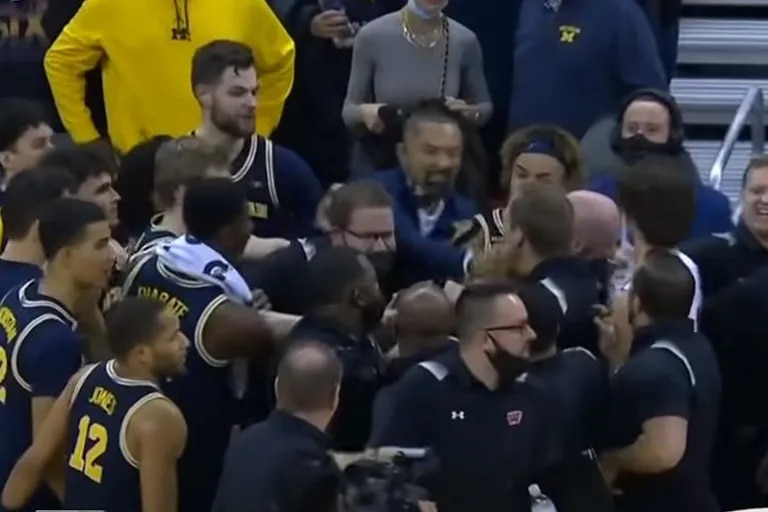 The images offer a scenario that seems from another decade. It is not credible that it can be 2022. And much less that what happened has two coaches as protagonists, one of them NBA champion. But if you also add that the scandal broke out in a college basketball game, everything becomes more unusual. At the end of the match between University of Michigan and of Wisconsin, juwan howardwho won a ring with Miami Heathit assistant coach Wisconsin, sparking a pitched battle.

The madness began when the game ended with a 77-63 victory for Wisconsin. Although it was a rough match, it had not gone beyond friction and words. Now, when the coach of the winning team, Greg Gard, began to greet the players of the opposing team and crossed paths with Howard, champion in 2012 and 2013 of the NBA, everything got out of control.

In the images of the official transmission the tense moment could be seen. Howard, NBA All Star in 1996, rebuked Gard for a specific play in which the Wisconsin coach called a timeout and delayed the game with the game practically resolved.

The discussion began to heat up.they grabbed their clothes, the shaking began, the players and members of the coaching staff tried to separate them and in the midst of that tumult Howard punched Wisconsin assistant Joe Krabbenhoft in the face., which unleashed a scandal that lasted a couple of seconds. In that incident, forwards Moussa Diabate, Terrance WIlliams (Michigan) and point guard Jahcobi Neath (Wisconsin) were also implicated as aggressors.

In the subsequent press conference, Howard gave his version of what had happened: “I told the coach that I will remember that, because of that time out. I think it was very out of character for him to touch me while we were talking. That’s what escalated the situation. I didn’t like the time out they asked for. I’ll be totally honest, I thought it wasn’t necessary at the time, especially having a big lead. It wasn’t fair to our guys.”

Gard also spoke about what happened: “We were going down the line and we were all fine. He came up to me, pulled down his mask and said, ‘I’ll remember.’ He started pointing at me, he touched my chest and I said, ‘Wait. Let me explain why I took that time out.’ Apparently he didn’t like me calling a timeout to reset the 10-second clock, because we only had four seconds to get the ball to half court. I didn’t want to put my subs, I had all the guys from my bench in the game, I didn’t want to put them in that fighting position with only four seconds left. So I took a time out and it gave us a new 10 seconds which helped us get organized and get the ball in.”

Regarding the scandal and the incidents, the athletic director of Wisconsin, Chris McIntosh assured: “There is no place or space for conduct like that in any competition. It’s unfortunate and I hope the league acts quickly.”

University of Michigan athletic director Warde Manuel issued a statement after the end of the game: “I am aware of and watched the end of our game. There is no excuse for any member of our staff or student-athlete to get into a physical altercation with others, regardless of instigating factors.”

The Big Ten Conference spoke in an official statement: “The Big Ten Conference is aware of a physical altercation involving Michigan head coach Juwan Howard at the end of the Michigan Wolverines men’s basketball game and the Wisconsin Badgers. The conference is in contact with both member institutions and is currently evaluating the incident. The conference will provide further information and take prompt and appropriate disciplinary action when it completes its review.”

Scandal in college basketball: a former NBA champion and coach ended up punched