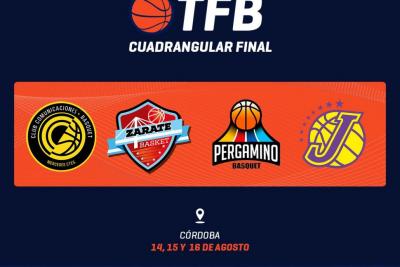 The definition of the Federal Tournament begins in its season 20-21. Four casts that will look for the two places to play the next Argentine League. Jchal de San Juan, Communications from Mercedes, Pergamino Bsquet and Zrate Basket. All matches will be played on the Cordoba Institute court.

As in the semi-finals instance, all the action can be seen live through the platform BasketballPass and minute by minute can be followed from the tournament’s social networks: @basquetfederal in Twitter; and TorneoFederal in Instagram, with exclusive information and live coverage.

Jchal had a dominant first part. He closed the Cuyo Zone with a 13-2 record to reach the playoffs without problems. In the second round he suffered but passed after his 2-1 record after beating La Rioja Basket and Olmpico La Banda but losing to NB Tucumn.

In the quarterfinals he consolidated his walk by winning all three games. He beat El Tribuno de Salta, El Riojano and took revenge against NB Tucumn. In semis he also had a suffered classification. He beat Coln de Corrientes, fell to Comunicaciones but was able to go head-to-head with NB Tucumn to take his ticket to the Final Four.

Communications it went from lowest to highest throughout the tournament. In the NEA Region he appeared in the final for a 6-6 mark and took fourth place. In the second round he started undefeated (3-0) after leaving Club San Jos, CSYD Luciano and Tokio de Posadas on the road.

In the quarterfinals he suffered to pass. He was 2-1 in a triple tie with Coln de Corrientes and Central Entrerriano, with which he was above to get his ticket. In the semis he left no doubts confirming his excellent playoffs. He was the leader with a 3-0 record after beating Coln de Corrientes, defeating NB Tucumn and Jchal de San Juan.

Parchment Basket He was one of the great protagonists in the South. He finished first in the closure of the Buenos Aires Zone with a record of 13-3. In the round of 16 it was difficult for him to get into the rhythm but finally he was first with a 2-1 mark after beating Centenario de Neuqun, All Boys de La Pampa and losing to Estudiantes LP.

In the quarterfinals there was a lot of tension. A triple draw with Zrate Basket and Unin with a 2-1 record but he managed to gain access. In the semifinals he could not face Zrate Basket but beat Gimnasia de Rosario and beat Sportivo Suardi to reach the close of the tournament.

Zrate Basket it also progressed throughout the tournament. He was one of the protagonists of the Buenos Aires Zone but finishing third with a 10-6 mark. In the round of 16 he finished 3-0 after beating Independiente de Neuqun, Prfora de Plaza Huincul and Unin de Mar del Plata.

In the quarterfinals he suffered after the triple tie with Unin and Pergamino Basquet, but he got the ticket on the last day. In semis he demonstrated his category after beating Sportivo Suardi, surpassing the local Pergamino Basquet and finally Gimnasia de Rosario

The debut winners will exchange rivals for the 2nd date