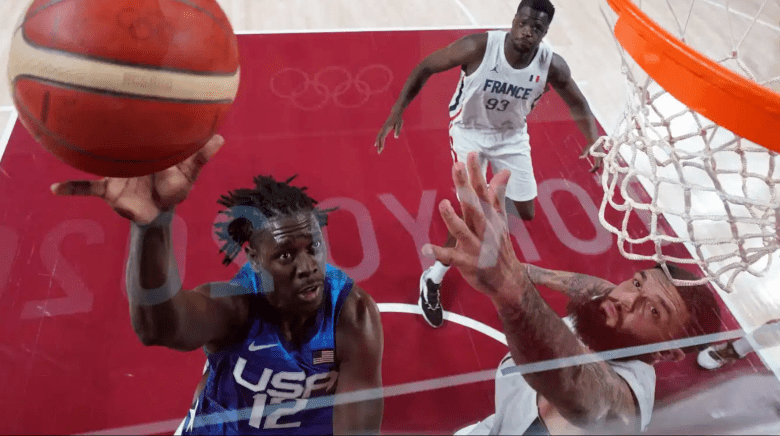 Jrue Holiday of the Bucks

Just days after helping Milwaukee win its first championship in 50 years, Jrue Holiday played in the worst loss for the United States team since 2004.

Surprisingly, the United States lost 83-76 to France. Holiday had 12 points in the fourth quarter after arriving in Tokyo on game day.

“We were winning with a minute and a half to go”, Holiday said at his press conference on July 25. “We had the opportunity to hit a triple, take a couple of rebounds, I missed a three-pointer to take the lead. But something incredible happened and suddenly we were losing by four points. I feel like we missed a couple of easy triples, but France is a good team. They played very well as a team and it was obvious that they were consistent throughout the game. At times we had an advantage of nine or ten points, and we should have maintained that advantage. We should have increased that advantage. But I still have a lot of positive things from the game. France is a good team, but I feel that we are going to improve with the game we play.

Holiday gave his team a ten-point lead for the first time in the game, after hitting a shot of three with 53 seconds left in the first half, leaving the team up 45-35. But the team went to the locker room with a lead of just eight points, 45-37.

Kevin Durant put the team up 47-37 to start the second half, but the NBA stars couldn’t beat France. The French took the lead in the third quarter, and started the fourth quarter up 62-56.

When Team USA led 74-67 with 3:41 left after Devin Booker’s free throws, the team lost the lead again. After that the team managed to score just one field goal plus the rest of the game. Holiday, who finished with 18 total points, kept the team afloat by scoring the majority of his points in the fourth quarter.

Known for dominating world basketball with the best talent in the world, the United States national team ended with a disconcerting defeat in the first game of the 2021 games. The 1992 “Dream Team” was totally dominant, crushing the competition at the Barcelona Games. Except for a bronze medal in 2004, they have won every gold medal from 1992 onwards.

Prior to his defeat to France on July 25, the United States team had not a single match since the 2004 Games semi-final. The team started the Match against France with a winning streak of 25 matches in a row. The coach, Gregg Popovich, like Holiday, recognized the good work of the French team.

“You are not surprised to lose a game,” Popovich said, according to ESPN’s Brian Windhorst. “You are disappointed, but I don’t know what it is to be surprised.” That is disrespectful to France. Did they expect us to win by 30 points or something like that? They have a great team.

France has several players who play and have played in the NBA. The entire French starting team has NBA experience.

Evan fournier, who plays for Boston Celtics, hit the triple winner. Fournier finished with 28 points. The pivot of the Utah JazzRudy Gobert also did his thing scoring 14 points and grabbing 9 rebounds for France.

In total, eleven teams have players who play or have played in the NBA. Popovich made it clear that winning the gold medal will not be easy.

“I think it would be very superb to think that we will win the games just by going out to play,” Popovich said, according to Vaccaro. “We have to make the same effort as all the other teams. And during those 40 minutes, they played better than us.

READ MORE: “Luka Doncic is the best player in the world”: Who said it? “

This is the original version of Heavy.com by Matthew Davis