Emmanuel Ginobili just inducted into the NBA Hall of Fame, becoming on the first Argentine basketball player to do so. Manu is already a true great, but his four rings with San Antonio Spurs and his magical performances during 16 seasons in the greatest basketball league on the planet consecrate him in the Olympus of the gods. Now, he recognized by the cradle of world basketball.

As much as it was withdrawn on August 17, 2018, almost four years ago, Ginobili will be eternal and there will always be the gallery of basketball greats and also among the best Argentine athletes in history.

Manu left a mark, a legacy. Perhaps the gold medal obtained with the Golden Generation in the olym gamesAtlanta Peaks 2004 turns it into legend along with the rest of the members of the best Argentine team of all timeamong so many personal achievements, collective titles and Olympic medals that he has won.

Time passes, but the figure of Manu Ginobili and his memorable plays remain. And, of course, there are books that review his life, his work, his career. Ultimately, the life of a elite athlete who played basketball as if he were an artist. Manu is unique, he is already a legend. From Bahía Blanca to the whole world. Now, no less than in the NBA Hall of Famein Springfield.

Next, the most important books about Manu Ginobili that immortalize his figure.

Its about first book about the most important figure in the history of national basketball written by journalist Daniel Fresco and published by Aguilar editions, in 2005 and reissued in 2018. At that time, Manu had already won the gold medal in Athens 2004 and two NBA rings with the Spurs, in 2003 and 2005. In addition, he was runner-up in the world with the Argentine Basketball Team in Indianapolis 2002.

In the 304 pages, Fescó reconstructs Ginobili’s biography through a compilation of testimonies from family, friends and former colleagues. He also reviews his beginnings in the National Basketball League, his childhood in Bahía Blanca, his beginnings as a basketball player in Andino de La Rioja, his first successes in the National Team and his first two titles with the number 20 jersey of the San Antonio Spurs, in the NBA.

A must have in the library and get to know in depth the beginnings of Manu. The book is available at 2,649 pesos in Mercado Libre and in other bookstores. 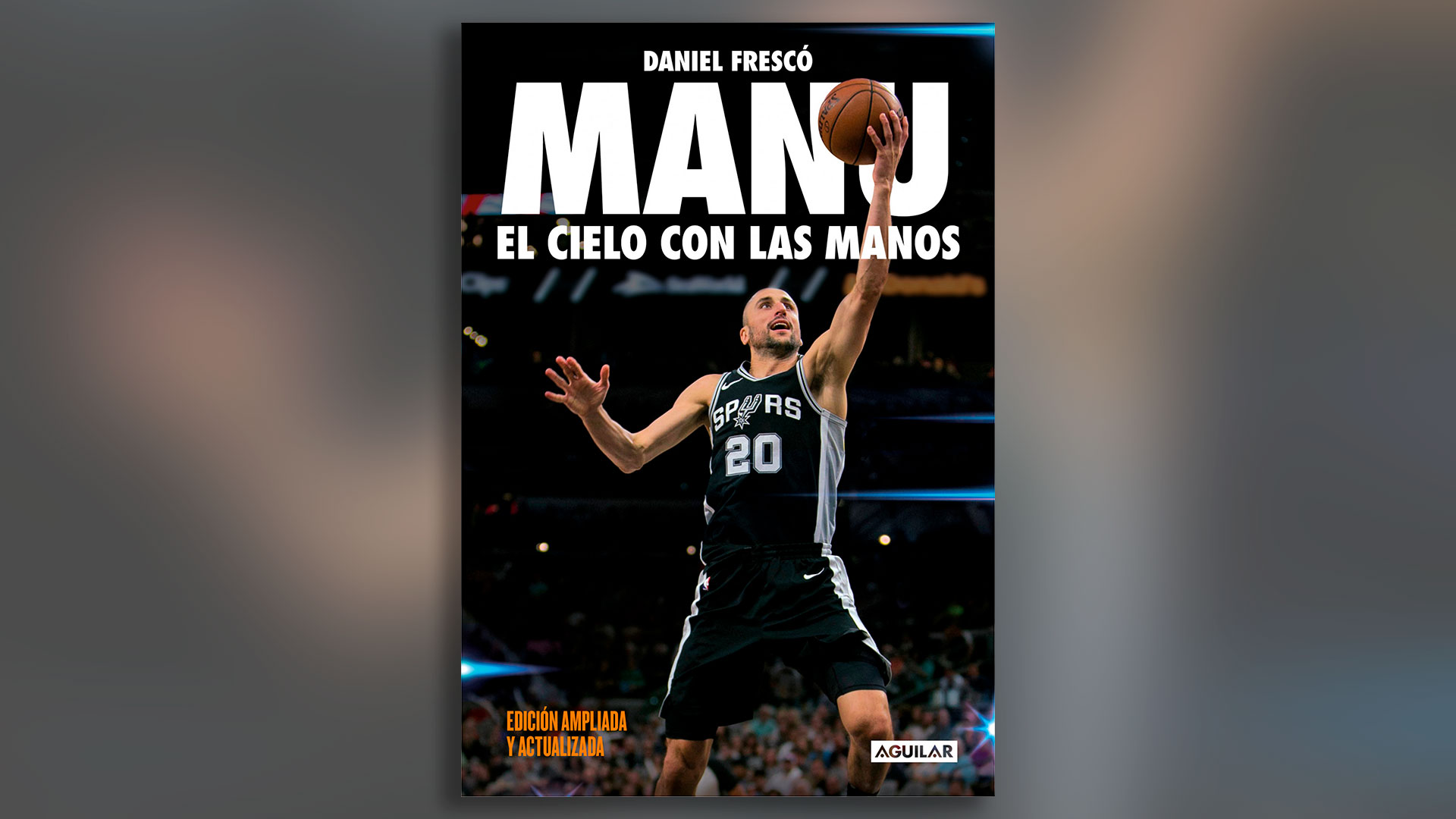 Manu. The sky with the hands, by Daniel Frescó.

The lid is different. In this case, Manu appears with the legendary jersey number 5 of the Argentina Basketball Teamalready withdrawn by the Argentine Basketball Confederation (CAAB) as a tribute, for his successful career.

The book, written in 2018 by the journalist Diego Morini and published by Editions B, goes through the jumps that the Argentine escort has given: from his beginnings in the National League through Kinder Bologna in Italy and his consecration as a star figure in the Spurs, in the NBA, and find a story that inspire any athlete. Manu’s friends and family were vital in narrating events that praise him. The price? 2,849 pesos in Mercado Libre. 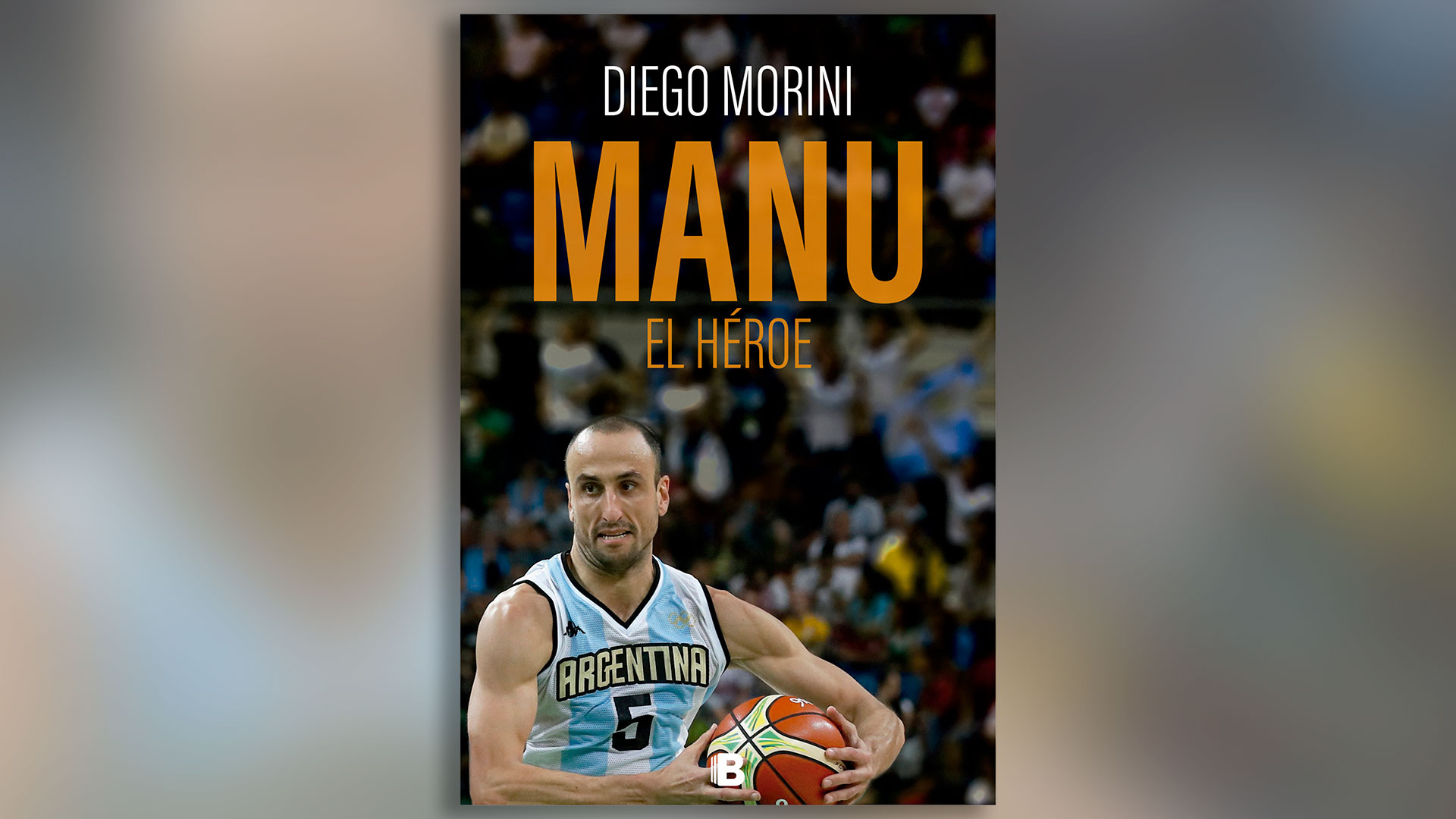 Manu. The hero, by Diego Morini.

The cover says it all: Ginobili playing basketball with the typical white number 5 jersey San Antonio Spurs and, in the background, the colors of the argentinian flag.

The book was written by Juan Francisco Escudero and published in 2016 by Ediciones JC. Contains stories of Golden Generation from one of the main founders: Emanuel Ginobili, the maximum referent together with louis scola. The author also explains how the group developed until it reached glory. His pages contain testimonials from Julio Lamas, the former basketball coach who won the Olympic gold in Athens in 2004.

In addition, it has the afterword by Sebastian Uranga, another big one Available at Amazon, Mercado Libre and other bookstores. Its price is between 8,140 and 10,000 pesos. 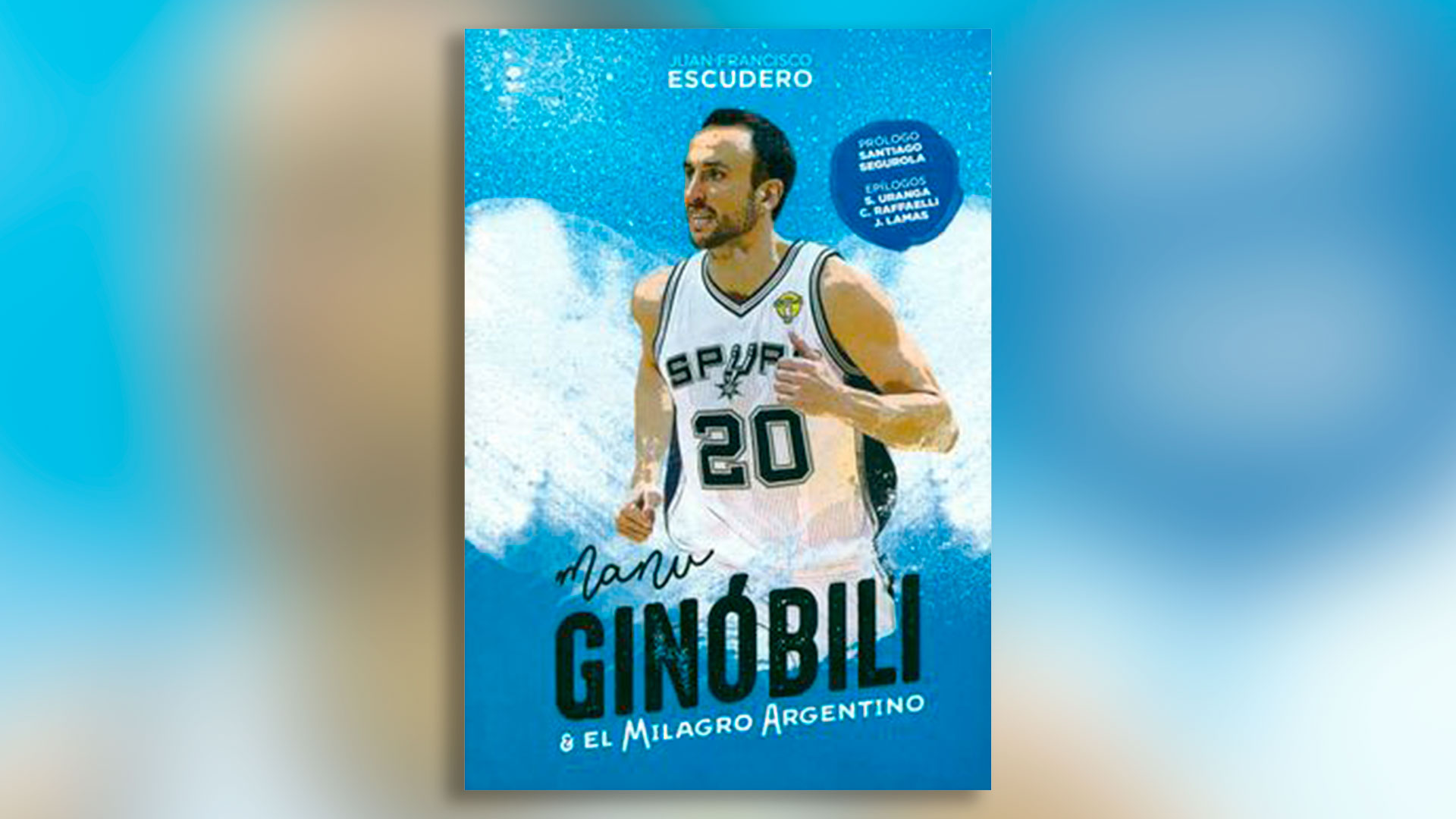 Manu Ginobili or the Argentine miracle, by Juan Francisco Escudero.

The great book by Pablo Pokorski and Matías Baldo on the Golden Generation, published in 2016 by Aguilar. This is the story of the Argentine basketball team, chosen by the Argentines as the best national team of all sports and of all time: with Ginobili, Scola, Oberto and Nocioni beat the United States Dream Team, won the 2004 Athens Olympics and reached the top of world sport.

How could it be otherwise, Emanuel Ginobili appears on the cover scoring on a layup.

Also has testimonies of Carlos Delfino, Scola, Diego Maradona, Gregg Popovich (the successful coach of Ginobili, champion of the four NBA rings with the San Antonio Spurs) and the former coach of Las Leonas, Sergio “Cachito” Vigil, among others. The book is available on Amazon from 10 dollars and in other local bookstores from 2,200 pesos. 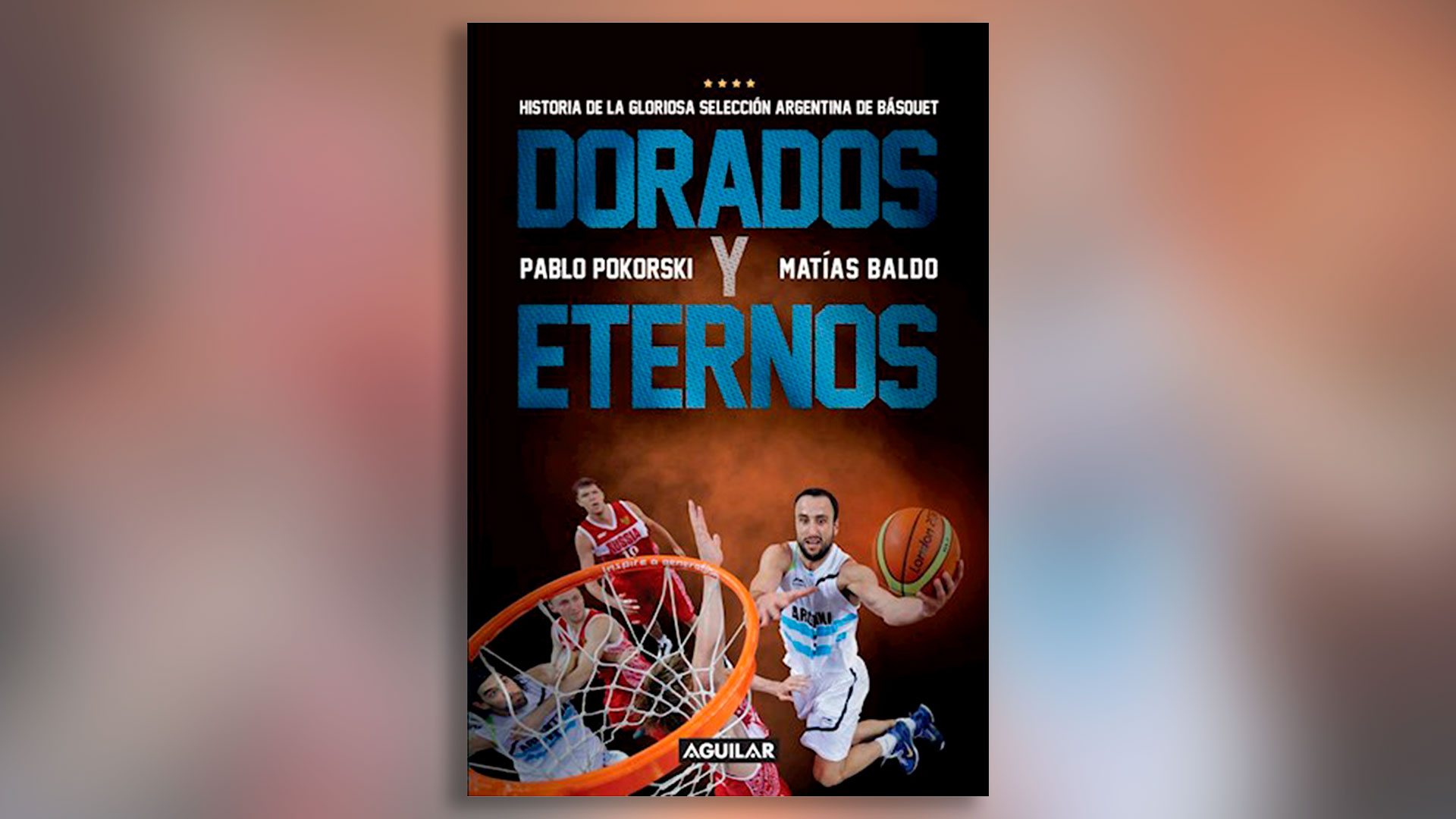 Golden and eternal, by Pablo Pokorski and Matías Baldo.

The book was written by the journalist Julian Young –actually in Infobae– for a special publication of Diario Deportivo Olé, in 2013. There are 190 pages of pure basketball.

Over there, the author highlights Manu’s talent on and off the fieldreviews the education he received from his parents in Bahía Blanca, his development in the National League and his experience in the Italian League, where he won the local League, the Italian Cup and the Euroleague with Kinder Bologna in the 2001 seasons and 2002.

In addition, it relates his learning and his growth and adaptation process in the National Basketball Associationbetter known as the NBA, the basketball league in the United States, the elite of this sport in the world.

Mozo “humanizes” the figure of Ginobili even more, a distinctive feature of his sporting chivalry and his camaraderie. For many, these qualities led him to become the best athlete in the history of Argentina. One of the “jewels” of the book is the prologue written by none other than Leo Messi. You get between 500 and 800 pesos in Mercado Libre. 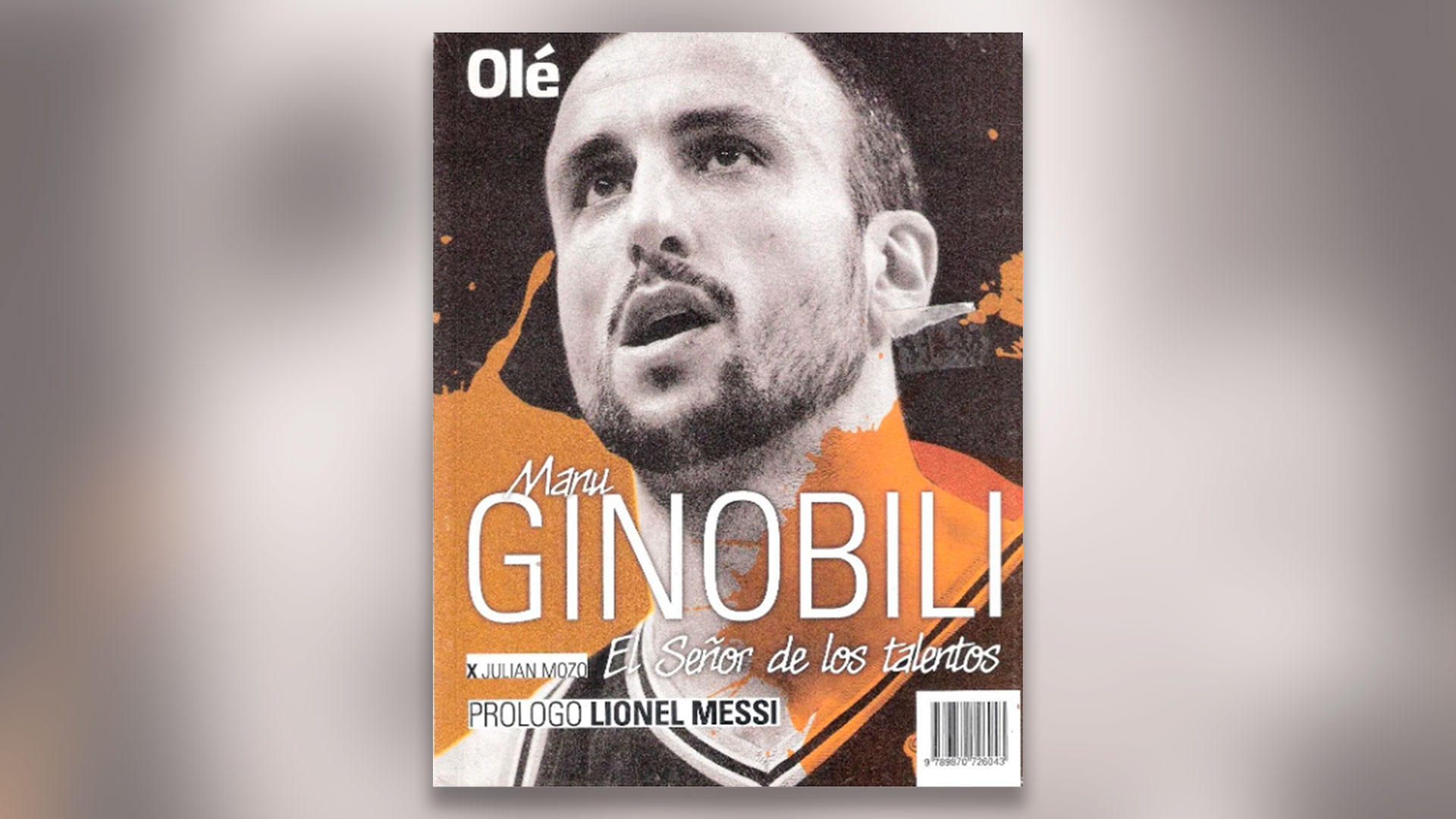 Manu Ginobili. The Lord of Talents, by Julián Mozo.

The three books that inspired the most famous video games and you did not know
Advice for runners: these are the best books to motivate you to run

Ginobili in the Basketball Hall of Fame: the five books to understand the idol of the Golden Generation