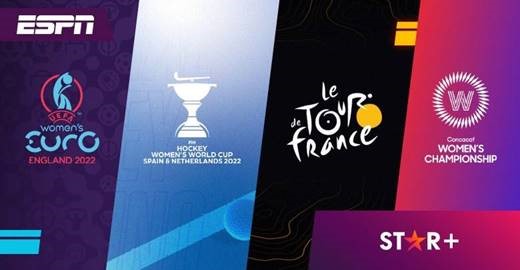 Throughout July there will be LIVE women’s competitions, with an exceptional variety

Star+ is a service of streaming of general entertainment and sports launched on August 31, 2021 in Latin America, and complementary but independent of the Disney + service in this region. The service is home to the exclusive premiere of general entertainment television series and movies from The Walt Disney Company’s content studios, including Disney Television Studios, FX, 20th Century Studios, Star Original Productions, National Geographic Original Productions and more. as well as ESPN’s live sports streaming service, the most respected and recognized brand for sports fans in the region. From dramas to comedies (including all seasons of The Simpsons) to adult thrillers, Star+ also features exclusive original programming from the Star general entertainment brand, along with a collection of regional original productions from Latin America.
Visited www.starplus.com for more information about the service and about Combo+, the competitive permanent commercial offer that makes available the subscription to Star+ and Disney+, independent platforms from each other, at a single and attractive price that gives access to the widest offer in streaming with entertainment for all ages.