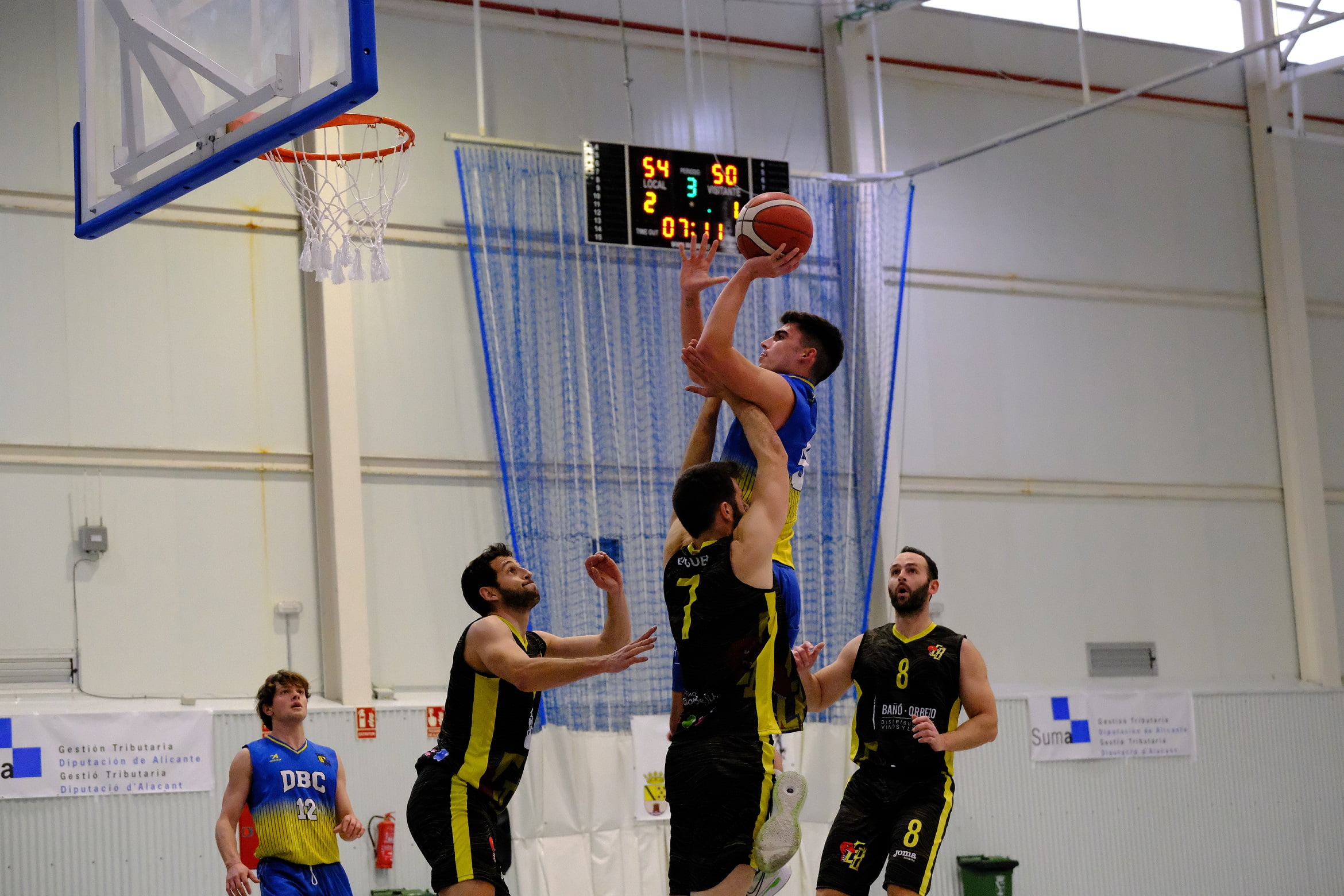 Difficult movement of equipment Senior Men 1st National Denia Basketball SUM to Mutxamel, to face a rival that was rushing their chances of fighting to be at the top of the standings, which ended in victory for the locals on a day in which our attack was not fluid (76-69).

Richard García’s injury as soon as the game started was a handicap for the rotation of Bernardo Sanz’s men. Despite all the efforts to stay in the match, the Alicantinos distanced themselves at halftime with a 12-point lead (42-30).

The team took the field much more aware and ready to fight, but found a very solid team in front that, although they gave up in the second half, did not really see the victory in danger at any time.

Five weeks remain in the first phase of the National competition in which the team must play nine games. The next one will be the first in which we will have to play a double day with two games scheduled at Joan Fuster, each more complicated.

On Saturday we will receive La Vila, third-placed in the league, and on Sunday Moixent, a team that also aspires to enter the top group at the end of this first part of the season.

Suffering victory against Ondara of the Preferred Senior Women’s team in a match played last Friday in the Joan Fuster pavilion (72-48).

From the beginning it was clear that we were not going to have an easy match. The zonal defense of our rivals prevented us from playing with rhythm and their rebounding caused us many problems, allowing them to always be in the game until the last quarter.

In those last ten minutes the John Louis Perez They jumped onto the court psyched up and put all their effort in defense to end up breaking the match. The differences grew rapidly to over twenty points, which meant that the end of the match could be approached calmly.

The Preferred Senior Women’s team recovered on Sunday in Pedreguer the first of their three postponed matches at the start of this second phase of the competition, reaching the team’s first defeat of the entire season in a tough match (72-61).

The bad start, with a partial against 15-3 in the first six minutes, was decisive for the development of the game.

Pedreguer tightened the rope in many moments and was close to definitively breaking the game. With more pride than good play, however, we managed to react, and after containing his attack we managed to get closer to just four points midway through the third period.

Finally everything was decided from the triple where the locals were much more successful than us, taking the first derby of the season, and taking the initiative in the race for the first places in the group at the end of this championship phase.

A bad start of the team in attack made things even more difficult for the Preferred Senior Male team against the group leader CB Sueca (46-54). Only the Dianense defense prevented the game from being decided in the first quarter. The difference of fourteen points with which the Valencians ended up dominating it went against what one might think, the turning point of the match.

The team did not fall down at any time and maintained its intensity behind, making it very difficult for CB Sueca to score, while little by little it was finding ways to do damage to its hoop. With three minutes to go in the third quarter they managed to catch up (30-31), in the best minutes on the pitch.

From then until the end they had our options but the visitors were right in the decisive moments, taking enough advantage to prevent us from completing the comeback.

Very important victory for the Preferred Junior Men’s team in their trip to the Martínez Valls Ontinyent court (64-66), achieved based on perseverance and belief in collective work. In the first part, the two teams played one on one, exchanging baskets practically during the twenty minutes.

The maximum difference for one or the other contender never exceeded a margin of five points. The solidity of our defensive rebounding and speed in attack kept us with all the options in this difficult movement.

Already in the second half we managed to be even more intense in defense and our first solid advantages arrived that gave us wings to believe in victory. But the locals had not said their last word, much less, and they reacted, leaving everything pending of what happened in the final ten minutes of the game.

Their perseverance and insistence on defense and rebounding led them to a five-point lead with only a minute and a half remaining in the game.

Once again, the locals insisted on complicating things for us and with two consecutive baskets they got within a point when there were barely five seconds left to play. The team had the maturity to play the last possession, forcing a foul that closed the game from a free throw, leaving them no time to try a final shot.

Congratulate the boys for their remarkable step forward that is evident week after week and is leading them to be a better team, enjoy what they do, and climb positions in the classification coming out stronger than ever from the bad dynamics with which they started the course.

Denia Basquet Suma could not win in Mutxamel