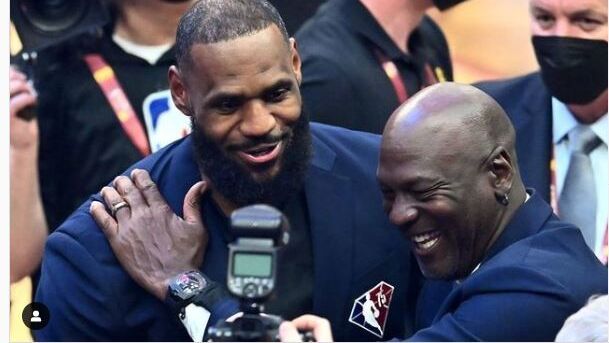 That Michael Jordan is a fan of watches is well known in this world. The great former basketball player, today the owner of the Charlotte Hornets franchise, takes advantage of any moment to show his passion.

The last we have seen Michael Jordan wear one of his caprices was last weekend, on the occasion of the celebration of the All-Star Game. This event, which annually brings together the best NBA players, held its last edition in Cleveland and was attended by Michael Jordan as a spectator more. Between hugs and greetings, the former Chicago Bulls player showed off a spectacular watch that was quickly identified by the most prepared experts. The clock in question is a Urwerk UR-210 Final Edition. A spectacular Haute Horlogerie piece, characterized by an orbital time indication of three-dimensional modules. As its name indicates, this watch is the last edition that the Urwerk house made of the UR-210 model before replacing it with the current UR-220. Made in an edition of just seven clocks for the whole world, the UR-210 Final Edition was made in steel and titanium, with a layer of black DLC coating. The final price of the watch was arounds 130,000 eurosalthough it is currently discontinued.

It is interesting to know that this is not the first time that we see Michael Jordan wearing an Urwerk. In fact, the former player has become one of the great ambassadors of this exquisite brand. Among other models of the brand that we have seen in Jordan’s wrist we highlight the UR-203 and different versions of the UR-202.

They all have in common the system of orbital time indication that we mentioned earlier. Created in 1997 by the watchmaker Felix Baumgartner and the designer Martin Frei, Urwerk is the paradigm of the so-called Author Watchmaker. Its annual production does not exceed two hundred copies. In addition to these curious watches, Urwerk is famous within the sector for having launched the AMC in 2018, a set consisting of a pocket model, coupled with an atomic charge table clock and a precision of one thousandth of a second. Only three units of the AMC were made, each at a price of 2.6 million euros.

Michael Jordan’s watchmaking passion goes beyond this small Swiss firm. Richard Mille, A. Lange & Shne, Uysse Nardin and of course Rolexalso have a presence in the fabulous wardrobe of this sports star.