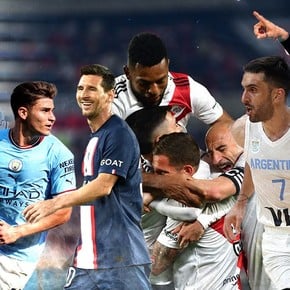 People from Mar del Plata know that there is sun and go out to the squares and beaches despite the fact that it is winter. And when there is basketball, he also goes to the court and blows up the Sports Center with 7,000 people to see the Selection who is playing the Qualifiers with a view to the World Cup in Indonesia, Japan and the Philippines 2023. The fourth window had started with loss vs. Canada and closed it with victory this Monday night against the Bahamas by 95-77. In November he will visit the Dominican Republic and the Bahamians, and in February Dominicans and Canadians will come.

The welcome to Campazzo, dolphin, Deck Y laprovittola It was thunderous, like “he who doesn’t jump is an Englishman”. There was a football atmosphere with people sitting on the stairs and even standing in the stalls. There was the Peñarol bar, at the same angle as always, and the visitors were not spared on the “donkey” when they missed, including the NBA Hield and Jones.

Che Garcia sat bolmaro and sent Delfino from 3 starters, that in the first he celebrated his 40th birthday by hitting a triple shouted by all. Another sustained applause came after the great assistance of Laprovittola for Deck’s solitary layup (he started with 4-4 from the court, he would be a scorer with 37; all of the Bahamas started with 3-10): the game was already 17-7 with only 6m24s later from a 10-0 run. The Caribbeans toughened up their defense, grabbed a couple of rebounds and got closer to 21-15.

The National Guard of the Sea entered the breaks and the people moved as when it was carried by Campazzo, Peña’s idol, with 12 titles in the club, including four National Leagues. The Cordovan, from the bank, as an assistant to Che García, he gave directions. The midfield was handled by José Vildoza and Brussino.

A triple by Hield (Indiana Pacers) after starting 0-4 tied at 26; Campazzo had returned; Deck (ovation), rested. Despite the energy, Bahamas closed better and went 44-43 to ST.

Campazzo hit a triple (his first points) at the start of the third and got people up. Although the Cordovan thing was going to happen more because of his aggressiveness in defense, which the whole team imitated because he needed to stop the rival. Thus he was able to take control of the game and take new good advantages: 68-59.

The defense continued drying Bahamas and causing them losses (16). The team controlled the game under the baton of Campazzo, who generated the “Facu, Facu” of the people who love him with his talent (17 points, 8 assists and 3 recoveries). Bahamas had already thrown in the towel, except for a dump by Jones, that of Charlotte.

Argentina rests nothing and leaves this Tuesday to Recife, Brazil to play, Already from Saturday against the Virgin Islands, the AmeriCup in Brazil. Without Patricio Garino, who was left out due to a grade 1 muscle injury to the biceps femoris of his right leg.

They are classified from the first to the third of each group plus the best fourth.

At the entrance to the Police A fan fest was set up for adults and children to enjoy raffles, shoot hoops and eat at the food trucks. There was even the possibility of painting the face in light blue and white. The idea is to repeat it in the next local window, in February 2023.

Before, the Players Association released a statement warning of a situation, as in a state of alert. “At the request of the players of the Argentine National Team, we met with them in Mar del Plata. We exchanged general conditions in concentrations and trips. We will continue in contact with the squad, supporting the team and attentive to their needs.”

At the request of the players of the Argentine National Team, we met with them in Mar del Plata. We exchange about the general conditions in concentrations and trips. We will continue to be in contact with the squad, supporting the team and attentive to their needs. pic.twitter.com/50VE6Hrth7

What had happened? The squad complained about the way he had gone to Canada, in two batches and a very long flight; there was also some claim for accommodation. Now… will something be said with the new flight? Again in two batches, they leave for Brazil at 3 in the morning…

Argentina beat the Bahamas and is close to the World Cup