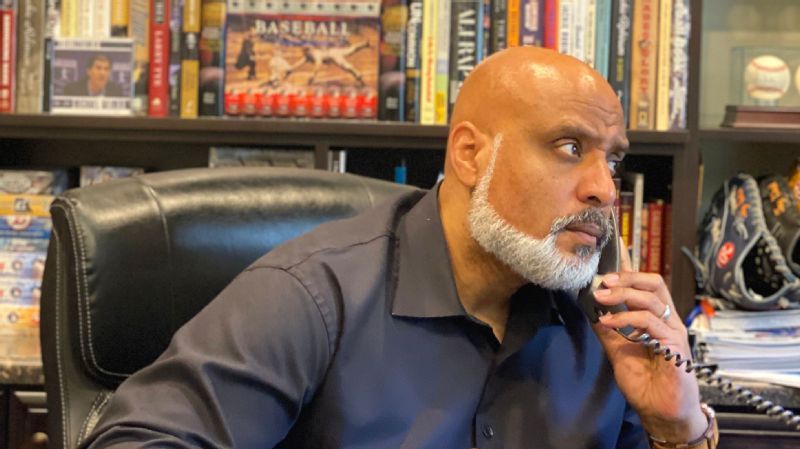 Baseball’s offseason has now entered what is supposed to be the preseason, the revival of the clean slate, the start of spring training and the new schedule. But commissioner Rob Manfred’s so-called “defensive lockout” has been very offensive. There is no new season yet.

Spring training games have been cancelled. Unless an agreement is reached in the next few hours, the regular season games are undoubtedly next.

This, on the heels of January’s Hall of Fame announcement, which marked yet another of the game’s low points: the iconic voting of Barry Bonds, Roger Clemens and David Ortiz reduced to a self-imposed spectacle of suspected steroids and the display of fairness. selective. Even Derek Jeter, one of the few recent Hall of Famers whose induction came without controversy, made headlines during the lockout. Jeter, who was once part owner of the Miami Marlins, has just resigned from his position as chief executive officer and divested himself of his shareholding as well. Baseball still can’t get it right.

Over the years, as acrimony between management and players grew, one train of thought suggested that the relationship was so toxic that what baseball really needed was new leadership — that the answer would be fresh new voices. and a new approach on both sides to more than a half-century of labor conflict between players and owners.

Tony Clark’s appointment as executive director of the MLB players’ union was exactly that. Since its creation in 1966 as a true collective bargaining unit, the union had never been led by a former player. Clark’s arrival in 2013, after the death of Donald Fehr’s successor, Michael Weiner, marked a different approach. The MLBPA still had the necessary number of lawyers and negotiators, but Clark’s vision was a true union by players, for players, led by players.

MLB leadership responded to Clark’s vision not as a fresh start, but as a golden opportunity to finally break up the union. There have been rumors over the years that Clark was in over his head. Owners unabashedly gloated over what they saw as a loss to the players during Clark’s first trade. But that, in turn, cemented the resolve of the players, who have been saying for the past two years that the ownership group was going to see a different opponent on the other side of the table. That determination has been reinforced by the direction and sentiment of the sport.

In the middle is the amateur, who might be tempted to blame the billionaires and millionaires, but that would be wrong and simplistic. Some players are millionaires. Almost every of the owners are billionaires. As the money has increased, player participation has decreased – four years in a row and counting. Every economy has a middle class, and baseball’s, like America’s, has been shrinking.

Conflicts for anyone who has been watching the game beyond the final score should know that money is just one of the most obvious elements of a broken game. Various areas of contention have been building up over the years.

Unlike its younger counterparts, baseball has always been defined by a bad temper, a cantankerous side that in good times can turn into an old-school virtue. These are not good times. The fight for money is a capitalist constant. The nature of defeat is excessive revenge for past wrongs. But this current labor struggle represents a cynical manipulation that has already been felt in the field, not yet articulated as part of a broader owner/office strategy.

Baseball, because of its past, its style, its conservative belief in its traditions, has always been seen as out of step. When the average game length was just over two hours in the 1950s, the sport was criticized for taking too long. Shortly after retiring, Jackie Robinson in 1958 told a reporter that baseball was boring to watch and that, as a spectator, he preferred basketball and football. In 1958.

In the past, however, owners and players have seemed to agree on the fundamental nature of the game, at least in the final negotiation. Today’s gaps are philosophical questions about what the future game will look like, how it will play, and why. Previous manifestations of owners’ greed, while no more appealing, did not directly threaten the actual game on the field. Owners have been trying to break up the baseball union since the Johnson administration by trying not to pay players or trying to win back free agency. Whether the fight was titanic, like in 1981 or 1994, or defining but contained, like in 1972, the battle centered primarily on money issues: a pension fight in 1972, free-agent compensation in 1981, a salary cap in 1994. Team owners have been trying to end free agency since its inception in December 1975.

However, the current Manfred lockout has a more direct impact on the game on the course: the current rules, already heavily in favor of the owners, are not enough. The owners continue to squeeze the orange without the goal of making the juice taste better. A new generation of employees now run baseball, hell-bent on treating it like a Fortune 500 company rather than a sport, finding loopholes to exert even more control without much thought or concern for its consequences. Baseball people today are manipulating the sport not to improve it aesthetically but to downplay the players.

The analytics departments try to control the game through manipulation, either through a combination of service time (keeping players ready for the big leagues in the minor leagues to prevent them from reaching free agency in time) and losing on purpose.

The former has had several blatant examples: David Price with the Tampa Bay Rays, Kris Bryant with the Chicago Cubs. Under Manfred, teams have manipulated lineups using the injured/disabled list.

The most recent is ‘tanking’ or losing on purpose. The Moneyball generation of fans who think along with front offices rather than emulate the batting stances of their favorite players may be tolerant of losing teams as a practical method of improving future teams. But players who are expected to perform for a team that isn’t trying to win are much less forgiving, especially when players hear boos when it seems like they’re not giving it their all.

The sport has taken on an impersonal assembly-line quality; teams play for outs, but players play for competition, pride, professionalism. That, combined with Manfred calling the World Series trophy a “piece of metal,” told players that the game’s commissioner wasn’t proud of what they did. They were just well-paid pieces.

Owners are still trying to end free agency, but now they’re trying to do it a different way. Even the proposal to expand to a 14-team postseason (disastrous without reducing the length of the 162-game regular season) will likely result in less player movement. If a team needs to be just over .500 to make the playoffs, teams will be less likely to make deals or improve their teams with big signings.

This is especially dangerous in baseball, the only sport where, due to pitching rotations, teams cannot field their best lineups in every game. It’s happening via an NFL-style competitive balancing tax (spoiler alert: it’s a salary cap), and by manipulating service time, teams are pushing when players can become free agents, then arguing that the players are too old to deserve multi-year contracts. When the players argued in response to reduce free agency eligibility from six years to five, the owners refused.

When the games finally return, the power of sport will surpass the people who run it. Fans will get caught up in the tense pennant races and all the wonderful talent on the field, because the players are the game. But each day of this lockout has exposed a loss. The last few months have reinforced a certain ugliness in the sport.

It won’t kill baseball, because players always save it, but it has made it a little less appealing, seeing it a little less given. It’s one thing to watch a business fight over money, and quite another when the people running the business seem to have little respect for it.

The MLB lockout only reinforces a certain ugliness about the game