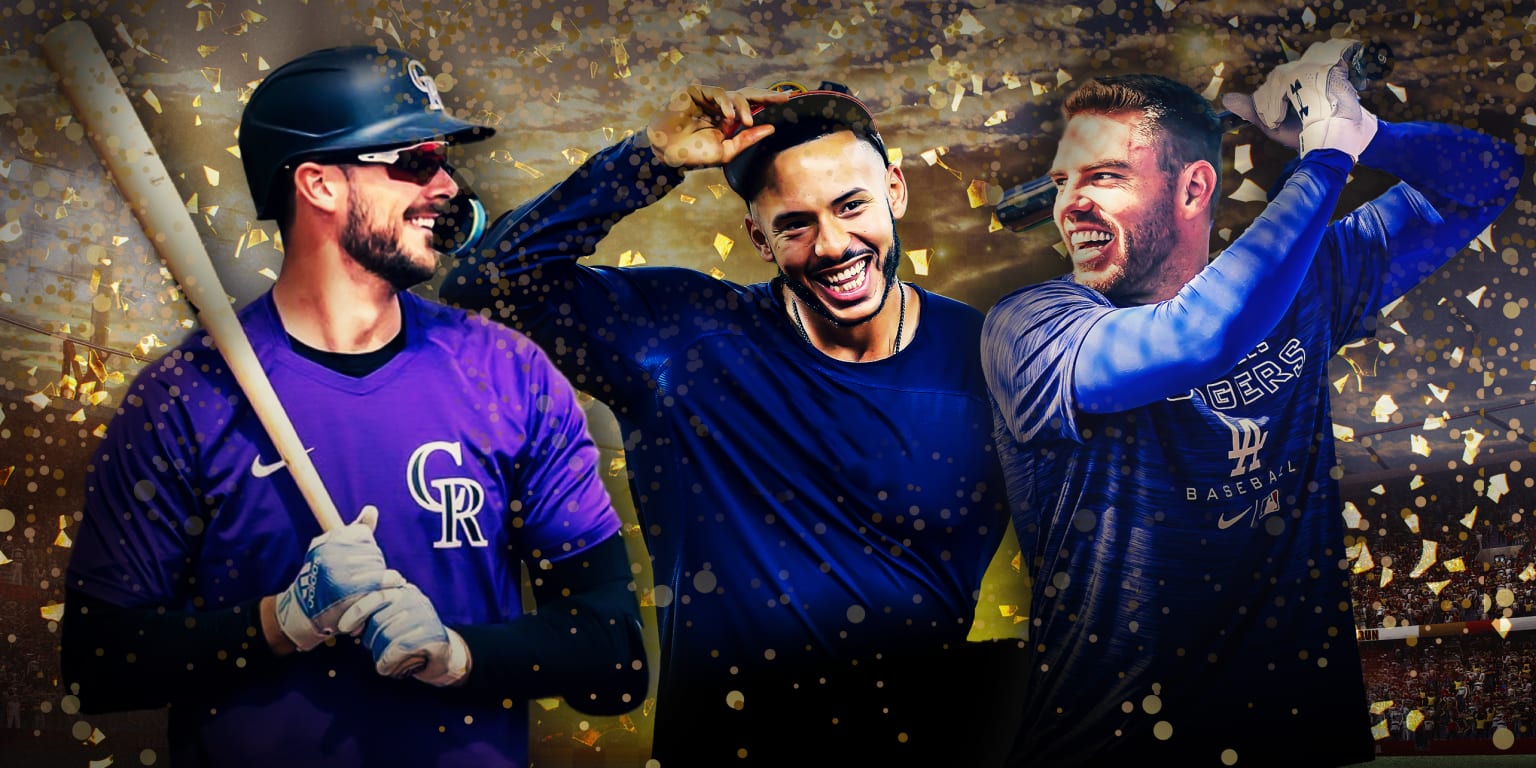 Clayton Kershaw is back with the Dodgers.

Well, that ends our analysis of the moves that did NOT surprise us.

Now, let’s talk about the things that did.

We publish a list like this every winter. The fact that we’re posting this list in the third week of March is obviously a sign of how unusual this offseason was in the world of Major League Baseball. The 99-day strike turned the calendar into chaos.

But even before the lockdown, we were already knee-deep in one of the weirdest offseasons in recent memory.

And things have only gotten weirder since the trade and free agent market reopened.

So, with that in mind, let’s go with our ranking of the most surprising news (so far, at least).

1. Kris Bryant’s contract with the Rockies

As good a player as Bryant is, he was not in the forecast for him to receive the second-largest contract ($182 million over seven years) among the players in this large group of free agents, second only to the $325 million, 10-year deal between Corey Seager and the Rangers.

And Bryant wasn’t expected to end up in Colorado. In fact, none of the prominent free agents were expected to sign with the Rockies. After all, just 13 months ago Colorado swallowed $51 million to send the face of the franchise, Nolan Arenado, to the Cardinals. And after finishing fourth for four straight years in a division that also includes the Dodgers, Giants and Padres, the Rockies look like a team with holes that Bryant alone can’t fill.

But well, the goal of each team is to improve, and the goal of the stars is to be rewarded as such. Both the Rockies and Bryant accomplished that. So let’s applaud them… as soon as we get out of this state of shock.

2. Carlos Correa’s contract with the Twins

The baseball industry was basically divided between who was the best free agent in this group, Seager or Puerto Rican Correa, but the general consensus was that the two shortstops made up that 1-2. The extension of Puerto Rican Francisco Lindor with the Mets (10 years, US$341 million) a year ago had laid the foundations for the aspirations of Seager and Correa. Seager perhaps got a better deal by signing with a team in a state that doesn’t have state taxes.

Correa, on the other hand, signed a very different contract than anyone would have expected when the winter began. After the layoff and a mid-winter change of agents, his best option ended up being a three-year, $105.3 million deal with a Minnesota team that absolutely no one expected would be in the market fighting for the best shortstops available. And it could be a short-term agreement, because Correa has clauses that allow him to get out of it after this season and the next.

So it’s still possible that Correa will end up making more money than any other shortstop in history. But for now, someone find this man a winter coat!

3. The Texas Rangers went all out

It didn’t end up causing much of a change in the table for a team that finished fifth in three of the past four seasons, but the Rangers have done quite well on the free-agent market in recent winters, landing pieces like Mike Minor, Lance Lynn, Kyle Gibson and Hunter Pence with what turned out to be clever signings.

But before this winter, the Rangers front office announced that they were ready to sign big names and accelerate their rebuilding process.

Turns out they weren’t kidding.

Combined, the 10-year deal with Seager and the seven-year deal with Marcus Semien are worth more than half a billion dollars. The Rangers also got one of the most interesting starters in Jon Gray and rounded out the roster with Brad Miller, Kole Calhoun and Martin Perez. We’ll see if that’s enough to turn a team that has just lost 102 games into a contender once and for all. But either way, the next time Rangers president of baseball operations Jon Daniels and general manager Chris Young say they have money to spend, we’re going to pay attention.

When Freeman walked her in the seventh inning of Game 6 of the World Series last fall, no one would have been surprised if the Braves owed her an extension while passing third base to ensure she retired in Atlanta.

It turns out that talks between the Braves and Freeman had been deadlocked for some time. The surprise trade for Matt Olson on March 14 surprised everyone, including Freeman.

And just as we were starting to get half used to the idea of ​​Freeman in a Dodgers uniform, the Braves announced they had signed Jansen, the all-time saves leader in LA.

5. The annual value of Max Scherzer’s contract with the Mets

It was assumed that Mad Max was going to sign a contract for a few years and a lot of money.

6. The Red Sox — not the Yankees — signed a top shortstop

After moving Gleyber Torres from the position in late 2021, the Yankees were clearly lacking at shortstop. Luckily for them, in free agency they expected one of the best groups of shortstops in history. The Red Sox, meanwhile, seemed armed at short with the great Xander Bogaerts.

Well, you know what baseball is like. But even people like us, used to expecting the unexpected, are surprised that now at the end of March it is Trevor Story who ended up in Boston (where he will move to second base), while the Yankees decided not to sign anyone and go for lower-profile options, trading Isiah Kiner-Falefa, signing Venezuelan utility man Marwin Gonzalez and hoping Anthony Volpe, the No. 8 prospect in all of baseball for MLB Pipeline, patrols the position in the not-too-distant future .

The Phillies were a poor defensive team last year (their minus-20 Outs Above Average ranked them 24th in MLB) and baseball operations chairman Dave Dombrowski had said improving at shortstop it was a priority.

That surely meant the Phillies were going to dive headlong into the shortstop market, right?

No. They went the route of a Sunday softball team and brought in a couple of guys who are scary with the bat.

Schwarber and Castellanos finished at the bottom of the Outs Above Average rankings last year. But there’s no question they’ll make that Phillies lineup led by reigning NL MVP Bryce Harper a lot more dangerous, and maybe Philadelphia can make up for its shaky defensive shots.

8. Derek Jeter is a free agent

It was rare to see him with a team other than the Yankees, but Jeter was determined to seize the opportunity to rebuild the Marlins when he became the club’s CEO in September 2017. Under Jeter’s guidance, the Marlins hired Kim Ng, the first female general manager of a men’s professional team in North America, secured the rights to a new stadium name, completed a new regional television deal, introduced new uniforms and surprisingly the team advanced and won a postseason series in the brief 2020 campaign .

But just when it looked like a team with a battalion of young arms might start to become a more sustainable winner over time, Jeter abruptly announced in late February that his vision for the future no longer matched the team’s.

We knew there were going to be a lot of shortstops available this winter. But we didn’t think Derek Jeter would be one of them.

Back in early November, the Dodgers hit the market and signed Heaney to a one-year, $8.5 million deal. Although it is not a figure that will unbalance the finances of a team with the resources of the Dodgers, it was still something striking in the case of someone who came from leaving an EFE of 5.83 and an EFE+ of 76 (or 24% worse than the average). in the league) in 129 2/3 innings for the Angels and Yankees last year.

Heaney’s contract ranks 20th in average annual value for starters signed this offseason. To put it in perspective, he received $3 million more than Michael Pineda will earn on the Tigers after posting an ERA of 3.62 and an ERA of 117+ in 109.1 innings.

Everyone assumed that Kiner-Falefa, who had become the Rangers’ regular shortstop in 2021 after winning the Gold Glove at third base in 2020, would return to the hot corner because of Seager’s signing. Before Texas pulled out the checkbook, Kiner-Falefa, who ranked second in WAR in 2021 among position players returning to the team this year, appeared to be one of the club’s few foundational pieces. It was in his plans enough that he was the first player manager Chris Woodward called when the lockout was lifted.

So it was quite a surprise when the Rangers traded Kiner-Falefa to the Twins for catcher Mitch Garver. And even more shocking when the Twins sent him, along with Josh Donaldson, straight to the Yankees in a trade for Gary Sánchez and Gio Urshela.

At the end of the day, Kiner-Falefa ended up on the team he grew up following as a kid in Hawaii. So at least his strange saga had a happy ending.

For the second year in a row, a reigning Cy Young left his team via free agency. But when Trevor Bauer, the 2020 NL Cy Young, left the Reds for the Dodgers, the picture was pretty clear: The Dodgers were willing to pay big for Bauer, while the Reds weren’t.

Ray’s departure from Toronto after his breakthrough campaign in 2021 has more particularities. In late November, he signed a five-year, $115 million deal with the Mariners, a contract nearly identical to the five-year, $110 million the Blue Jays had given Kevin Gausman hours earlier.

A difference of US$5 million spread over five years is very little, relatively. So this was basically due to Toronto’s desire to get Gausman, a player they had been following for several years, instead of retaining its first Cy Young Award since Roy Halladay in 2003.

It will be interesting to compare Ray and Gausman’s performances from now on…and even more interesting if Seattle and Toronto end up meeting in October.

The 11 biggest surprises in the market