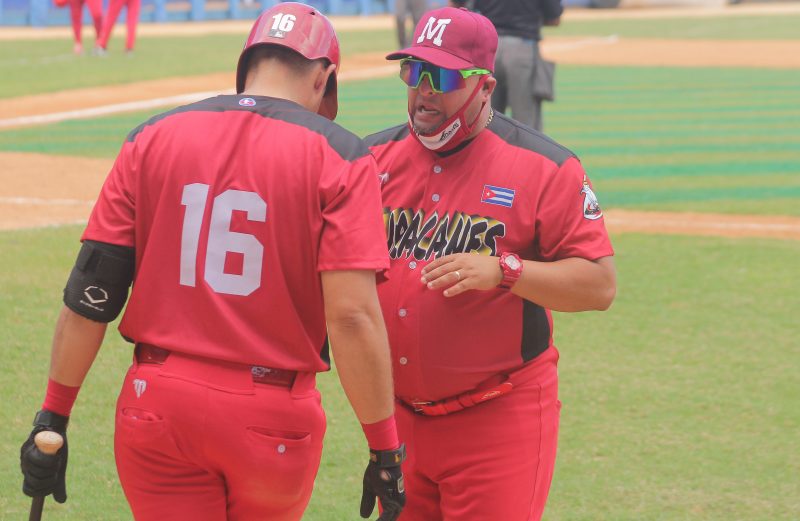 Michael González continues to reap success at the helm of the Hurricanes of Mayabeque. Photo: Boris Luis Cabrera/ Cubadebate.

The Hurricanes of Mayabeque climbed this Saturday again to the top of the standings of this National Series 61taking advantage of the slip of the Crocodiles from Matanzas through eastern lands.

This result has caused a true earthquake in our favorite pastime, when at this point in the championship the vast majority of the teams in competition remain with options to qualify, even to aspire to the top place.

The impetuous Yadían Martínez blew hard, and his boys from Mayabeque whitewashed the Toros Camagüeyanos 3-0 in their own territory of Cándido González, to climb amid hurricane winds to the long-awaited summit.

The right-hander from Quivicán barely allowed four hits in seven chapters of work while striking out three rivals, to achieve his third win of the campaign. Marlon Vega pitched the remaining two innings and kept the home plate doors shut tight to save Game 5 for him.

Juan Miguel Martínez, 4-3 with a double included, Orlando Lavandera 4-1, and Lázaro Martínez, 4-2; they towed the races.

The defeat went to the account of Frank Madan, in a good opening of seven innings where he only allowed a couple of runs.

For the Bulls, Yordanis Samón went 3-1 with a tubey.

In the Julio Antonio Mella, the Lumberjacks of Las Tunas continued their steady pace to the classification zone, by defeating the Crocodiles themselves, with a final score of 8-2.

Yudier Rondón (4-3) took the fences with the bags full, and Andrés Quiala (4-2) also disappeared the ball beyond the limits of the field to drive in a couple of runs.

The victory went to starter Yoidel Castañeda in his first start of the championship, after pitching 5.2 innings where he gave up six hits and a couple of earned runs. Alberto Pablo Civil took the applause and the save, with an excellent relief job by walking 3.1 innings with one hit allowed while keeping his opponents clean.

Dariel Góngora was defeated by enduring punishment of eight hits with seven clean scores, in the 5.1 episodes he remained in the box.

For the Yumurinos, Juan Miguel Vázquez hit a tubey that pushed two teammates for the rubber, and Yadil Dreke went 3-2.

The Azucareros de Villa Clara lost a good opportunity to climb the rung to the top, losing this afternoon to the Roosters from Sancti Spiritus 9-3after having starred in the feat of succeeding in ten consecutive challenges.

Eriel Sánchez’s troops were not scared by this record of their rivals and entrenched themselves in their territory of José Antonio Huelga to hit them very early with an attack of 12 hits.

The great Frederich Cepeda hit home run number 330 of his glorious sports career and was placed just one extra-base hit away from reaching 800, according to data from the boys of the already essential Team Vívela.

The also experienced Yunier Mendoza drove in three teammates to the plate with one hit in three at-bats, Carlos Gómez went 2-for-4 with two RBIs, and Moisés Esquerre had three singles in four plate appearances with one RBI.

The lefty Ariel Zerquera, although he conceded five walks, barely tolerated a trio of hits without runs in seven innings of work, to reach four wins, and Daniel Conde was the loser by allowing two runs in an outing where he could barely retire an opponent .

For the Azucareros, substitute Ariel Díaz went 2-2 with an RBI, and Reidel Pedraza hit a tubey in five at-bats to drive in a couple of runs.

Raúl Valdés hit a single at the end of the new chapter, and the Tigres de Ciego de Ávila left the Elefantes de Cienfuegos lying on the grass of Paquito Espinosa, with a final score of 4-3.

Another good news for the Avilanians was the performance of Vladimir Garcia, who in three innings of work as a reliever only allowed one run to achieve his first success of the year.

Pedro Mesa was the loser of the match by accepting the race that defined the match, after having worked 3.1 immaculate chapters.

For the Tigres, Yorbis Borroto went 3-for-5 with a double to his account, Raúl González hit a pair of tubeyes three times to drive in one, and Alfredo Fádraga went 2-for-4 with two RBIs.

The Lions of the capital did not believe in the minefield of Guillermón Moncada, and with an explosive package of four annotations in the same first chapter, they fumigated their historical arch-rivals in Santiago de Cuba 9-2and marked territory for those indomitable lands.

The experienced Danny Betancourt could not stop the momentum of the blue beasts and went to the showers after enduring Yasiel Santoya’s towing rocket, Roberto Acevedo’s double that brought home two, and another Oscar Valdés tubey, which would be enough for the blues will reach a definitive advantage.

The conga from Santiago never stopped, the fans didn’t stop moving their hips either, and the Wasps kept flying over the head of starter Pedro Álvarez most of the time.

The “Blue Rooster” knew how to stick his arm in and scare them away with courage, until completing six episodes with a clean break to his records, to achieve his fourth success of the season, the top winner among industrialist pitchers.

In the sixth inning, Guillermo Carmona’s troops ended up destroying the enemy colony, when they made a cluster of three goals where the Valdés mask disappeared the ball, to silence only for a moment the hubbub of the eastern stands.

Remberto Barreto was in charge of fumigating the remains that remained on the grass for three episodes to avoid surprises, and the save was scored, although he tolerated a race when it came to picking up the bats and balls.

The Holguin Cubs, motivated by their Calixto Garcia audience, pounced on the Hunters of Artemisa and defeated them 7-2to get them out of the qualifying zone.

Edilse Silva (3-1) hit a tubey and drove in three runs, Yordan Manduley had a perfect afternoon (2-2) with an RBI, and Maikel Cáceres and Jorge Luis Peña hit RBI singles.

Wilson Paredes came to the rescue in the middle of the game and walked to the end scoreless for his third win of the season, and Idael Perera, a 21-year-old rookie who started his first career game, charged the backhand to the endure three runs (one unearned) without being able to get outs.

For the Hunters, Yoan Moreno and Deivis Hernández went 2-4 each, the latter with a double included and an RBI.

Eleven entries needed the Vegueros de Pinar del Rio to defeat the Alazanes de Granma by the minimum 7-6 in his headquarters of the Martyrs of Barbados, and thus jump the red line that separates the classification zone.

Frank Luis Medina accepted two fouls thanks to the tiebreak rule for three full innings and won his second game of the tournament, and Kelbis Rodriguez suffered the setback after a long four innings relief, where he scored three fouls.

Frank Raúl González hit a pair of doubles and brought three teammates home from his cleanup spot, and substitute Yanciel Ajete was key with his two-RBI hit.

For the current national champions, who had five more hits than their rivals, Osvaldo Abreu (5-3) and Carlos Benítez (4-3) hit homers, both with two RBIs to their records. Iván Prieto also warmed the wood by pushing two more with three singles in five at-bats.

Finally, in the Guantanamo Van Troi the Indians of that province could not with the attack of the Pirates of the Island, and fell for the fourth consecutive time, this time with a score of 6-4to continue sleeping in the cold basement of the championship.

Armando Johnson’s troupe hit 12 hits, including three by Yasmani Viera with tubey and solo homer included, and three more by José Luis Bring to drive in another.

Luis Padrino stood out with a 6.1 innings relief where he didn’t allow runs to emerge victorious, and Franklin Quintana got the last three outs to score his sixth save of the contest.

Enyer Fernández conceded his fifth loss of the series, after a failed start where he was scored five runs (one unearned), in just one third of the game.

For the Indians, Yoandri Guibert (4-2) hit his first National Series homer to drive in a pair of runs. 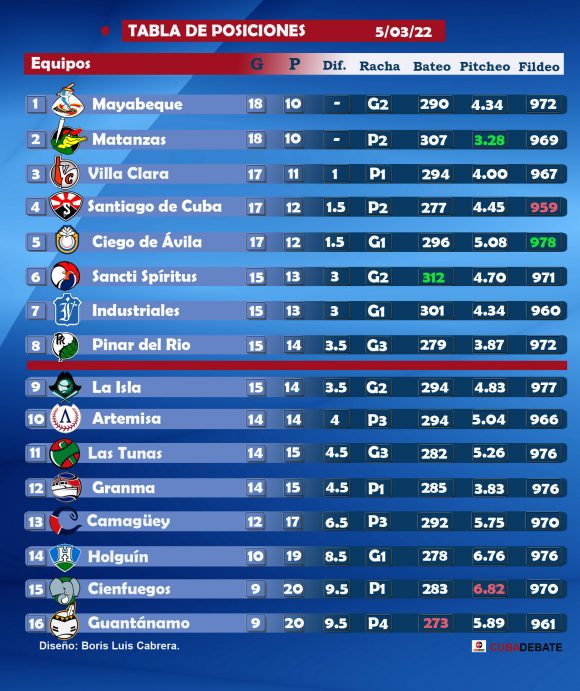 SNB 61: Hurricanes and earthquakes in the standings