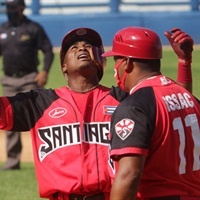 Havana.- THE BEES from Santiago de Cuba today knocked out the Pirates of Isla de la Juventud, 10 runs to zero, and became the second cast with 19 victories in the 61 National Baseball Series.

Eriberto Rosales’ troop put the islanders out of action in eight innings, with an 11-hit offense, undoubtedly very effective, and remarkable pitching by star Danny Betancourt.

OF INTEREST: “I was a novelty, something rare” in baseball arbitration

Danny was dominant for 7.1 innings, allowing no runs and only one hit. He did not give away a ticket and gave three strikeouts. The grout was concluded by reliever Jorge Luis Bravo, with two thirds of action.

The other KO of the day was a true scandal… Artemisa, visiting the Mártires de Bárbados stadium, thrashed the current Granma champions 15×1, with an offense of 18 hits.

If it’s about hits, news came from the Nguyen Van Troi park, where the Guantanamo players defeated Industriales 6×4. In that game, the blues hit home runs through Yasiel Santoya and Oscar Valdés, but the locals responded with homers from Over Cremet, Yoelkis Baró and Luis Jairon Echeverría.

The Camagüey Bulls beat the Matanzas Crocodiles 6×5 at home, despite Yariel Duque’s home run. Ciego de Ávila led Villa Clara 3×1 and Pinar del Río did the same with Holguín 8×7, with the sixth save for Frank Luis Medina.

The match between Mayabeque and Las Tunas was suspended due to the need to study westerners for presumed cases of covid-19. The other meeting of the day will begin at 7:00 p.m. between Sancti Spíritus and Cienfuegos.

At this moment, the best streaks in the championship are exhibited by Las Tunas (+4) and Mayabeque (+3), and the worst by Matanzas (-4).