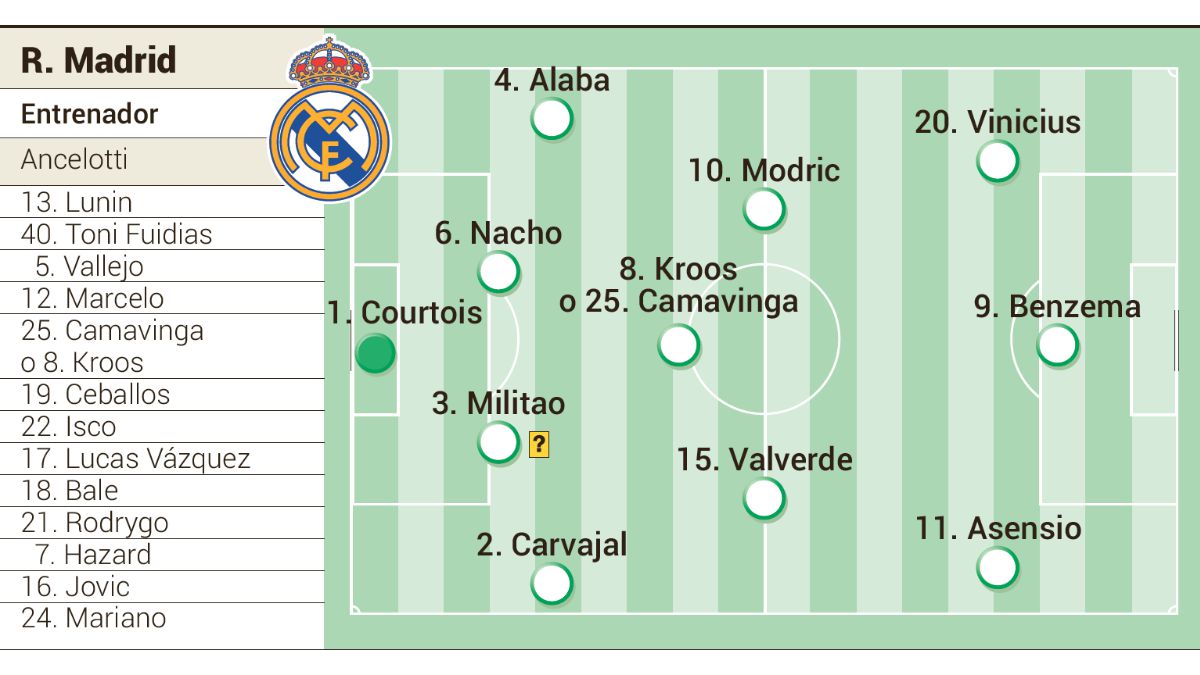 The first leg in Paris left two bad news for Real Madrid: the result and the yellow ones to Mendy and Casemiro, who carried a sanctionwhat will prevent Ancelotti from having two of his undisputed starters for the match that will decide the Champions League round of 16 tie against PSG this Wednesday at the Bernabéu, with the pass to the quarterfinals at stake. The Italian coach is also keeping an eye on the condition of Toni Kroos, who, after several days working apart, this Tuesday, on the eve of the match, already trained with the group. Carletto He stated that he will only align the German if he is 100%.

The Madrid coach will thus have to rebuild both his defense and midfield to welcome PSG. The solution for the rearguard, precedents of this season in hand, seems crystal clear, with the entry of Nacho in eleven. The unknown is whether Ancelotti will place the academy player on the left side or, as he has done in other games, he will move Alaba to the side and Nacho forms a central pair with Militao.

The center of the field presents more doubts, because Added to the puzzle of how to counteract Casemiro’s loss, both in choosing his replacement and in who performs the functions of the Brazilian, is the uncertainty of Kroos’ contest. Valverde, who did not play against Real convalescing from the flu, seems the first alternative, while, if Ancelotti opts for caution with the German, the one who can enter the scene is Camavinga, starter (and scorer) against Real Sociedad.

The goal and the attack trident do seem out of the question. Courtois, who in the first leg saved Messi a penalty, will be the guardian of the white goal. The task of the comeback is entrusted to Asensio, Benzema and Vinicius, who have each reached ten goals this season.

Thus, the possible eleven that Carlo Ancelotti can line up against PSG is made up of: Courtois; Carvajal, Militao, Nacho, Alaba; Valverde, Kroos or Camavinga, Modric; Asensio, Benzema and Vinicius. The coach has summoned 24 players, so he will have to discard to make up the bench. The list is completed by: Lunin, Toni Fuidias, Vallejo, Marcelo, Camavinga or Kroos, Ceballos, Isco, Lucas Vázquez, Bale, Rodrygo, Hazard, Jovic and Mariano.

And you, what eleven would you put on Wednesday against PSG at the Bernabéu?

Possible alignment of Real Madrid against PSG in the Champions League