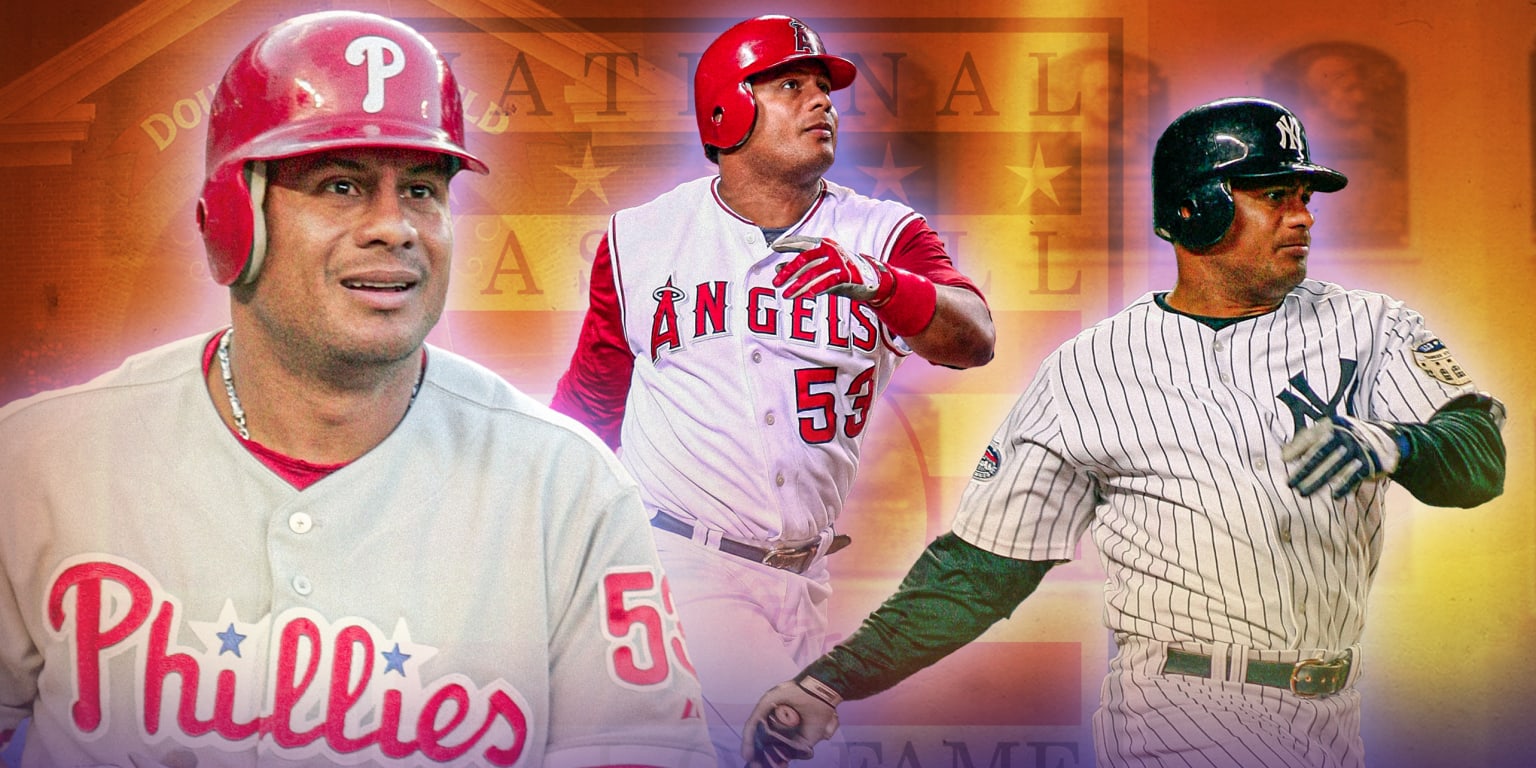 With the announcement of the Hall of Fame election set for January 25, MLB.com is hosting a series of discussions around players worthy of consideration. In this edition, we will analyze the Venezuelan Bob Abreu.

Alyson Footer, editor/moderator: At first glance, Bobby Abreu seems to be one step below being a “bubble player”; who, despite having a good career, seems to fall short of Hall of Fame standards. But a deeper analysis suggests that it deserves more recognition. Before we get into the details, let’s start with the question, is Abreu a Hall of Famer?

Mike Petriello, analyst: Yes! And I hope that it can hold up long enough that it can have a real shot at it in a few years.

Todd Zolecki, _Phillies reporter: *_Yeah, I think he had a Hall of Fame career, but you’re right, he’s one of those “complicated” players, in terms of consideration.

Mark Feinsand, executive reporter: I don’t think Abreu is a Hall of Famer. He got off to a worthy start for Cooperstown, but I think the second half was average. When you think about the players of his generation, you don’t point to him. He had the misfortune to play in an era plagued by offense, which hurts his case, perspective-wise.

Footer: Abreu reached bases more times than Tony Gwynn, had a higher on-base percentage than him and hit double home runs. Also, he hit more doubles than Gwynn. Gwynn’s OPS+ was slightly higher than Abreu’s (132 to 128). But Abreu risks falling off the ballot — last year, he received just 8.7% of the vote. What overall stat do you think can carve a path for him into the Hall?

Zolecki: There’s a lot. I think there’s something like 26 right fielders in the Hall. Abreu is in the top 10 in on-base percentage, stolen bases, extra-base hits and doubles. His career WAR (60.2, according to Baseball-Reference) is higher than Cooperstown’s 11 current members.

Feinsand: The comparison with Gwynn is good, but when you think about the best of his generation, Gwynn is automatic, Abreu is not. Abreu was called up to two All-Star Games, to 15 from Gwynn, who won eight batting titles, to none from the Venezuelan. Abreu was clearly a better walker — he traded 1,476 to Gwynn’s 790 — but Gwynn had 700 more hits, and also won four Gold Gloves to one for Abreu (unbelievable, given his average defense).

I know there’s a lot of criticism surrounding the Golden Gloves, but it’s still something to watch out for. Gwynn helped the Padres win a pair of American League pennants — 14 years apart! — while Abreu only reached one Championship Series in his career. In general, the numbers do not tell the whole story.

Petriello: The comparison with Gwynn is perfect. Abreu hit twice as many home runs as Gwynn, stole more bases and reached base more often. I admit he wasn’t much of a defender, but the main difference was his batting average. I compare him to other gardeners and think, is there such a big difference?

Let’s go with the OPS+ for a second: Abreu, Dave Winfield, Puerto Rico’s Roberto Clemente and Carl Yastrzemski had identical marks (between 128 and 130 OPS+). Abreu had more steals than everyone. More home runs than Clemente. Again, their defense wasn’t quite up to the task, but these guys got in there.

Think about it: There are only six players in the American and National Leagues who hit at least 250 home runs and 400 stolen bases. Rickey Henderson, Craig Biggio and Joe Morgan are in Cooperstown. Barry Bonds should. His father, Bobby, had an underrated career. Sixth? Open.

Footer: Todd’s arguments shatter the theory that Abreu wasn’t dominant enough. So why is he at risk of getting off the ballot? Because he played in a “very offensive” era, or because he was an outfielder and there are so many of them that his numbers are lost?

Feinsand: Abreu never finished higher than seventh in WAR and finished in the top 10 only five times during his career. He was an excellent player and very consistent, but not one of the best of his generation.

Petriello: For two reasons, I think. First, each voter has a maximum of 10 options to choose from; something that seems ridiculous to me and usually Abreu is the 11th and 12th player on the list.

Footer: Maybe I’ll get in when the ballot cleans up a bit.

Petriello: Second, he received little recognition during his era. Two All-Star Games? Not being in the top 10 in the Most Valuable Player voting? Not good, I admit. But when we look at those seasons, we have no idea what the writers were thinking. In 2000, he hit .316 with 25 home runs and 28 stolen bases. For the All-Star Game he had already given 100 hits. He also had a 143 OPS+. No MVP votes. He was not called to the All-Star Game. What were they thinking? I also think playing for an under-recognized Phillies didn’t help.

But it is strange. He hit .300 six times. He had eight seasons with 100 or more RBIs. He was 14 years old with at least 10 stolen bases. They are traditional statistics. I am not trying to apply the 2021 in 1952. How did it not receive recognition? Maybe because the team never made it to the postseason.

Zolecki: He asked me if his production was not valued enough during his best years. Phillies fans complained about his defense, forgetting his incredible offensive numbers.

*_Feinsand: *_Is 10 stolen bases per season a number that deserves Hall consideration? Yes, he had eight 100-RBI seasons, but that got him into the top 10 twice; he never finished higher than eighth place. He put up excellent numbers in an era where other players put up even better numbers.

*_Zolecki: *_I probably didn’t appreciate Abreu enough when I covered him between 2003 and 2006, but I still think he was really good. I never understood those who criticized him. Again, his defense. That he did not give key hits is not true; look at their numbers with men in scoring position.

*_Petriello: *_I think where he falls short is in the “Hall of Fame test”, right? It doesn’t “feel” like a Hall of Fame to many people, so it isn’t. It’s a shame.

*_Zolecki: *_Yes, the “Gama Hall test”. It’s funny because currently in Philly there is Abreu, who doesn’t “feel” like a Hall of Famer, due to some people’s intangibles. But there’s also Jimmy Rollins, who is falling short because some people look at his WAR and say, “Nah.”

*_Petriello: *_For me, the candidates who are on the edge have a chance to increase their chances with the facts in the postseason. Abreu played only 20 playoff games in his career; he hit a home run and drove in nine lines. His team lost in the first round three out of four times. I don’t blame him for being in bad teams, and while I don’t usually penalize a player for being underweight in his postseason numbers, it doesn’t help a doubtful candidate either.

*_Footer: *_Everyone has mentioned Abreu’s weakness defensively. Defense and offense should count equally, right? Should his poor defense affect him?

*_Petriello: *_It should, although the more you go into the past, the more difficult it is to measure (it’s even funny that he won the Gold Glove in 2005). But, to the eye percent, it was normal, not good. The numbers support that, affected his total WAR. When both things are measured, I think it should be taken into account. On the other hand, if you have an offensive player like that with a good defense, he’s a Hall of Famer in his first year.

*_Zolecki: *_I never saw Abreu defend the right field in a way that made me think he was bad. It wasn’t a Gold Glove either. The fans always annihilate me because they say I avoided hitting the wall. Maybe he did on a few occasions, but he caught balls within reach and had a solid arm. I don’t know what this means, but I’ll mention it anyway: Abreu’s 120 assists between 1998 and 2009 are the most of any outfielder; six more than Dominican Vladimir Guerrero.

Yes, defense matters, but when you think about his impressive consistency and quality, especially compared to other right-handers in history, he more than makes up for it.

**Feinsand: **He was always able to get on base. Nobody disputes that.

**Footer: **Abreu is in his third year on the ballot. In his second he received 8.7% of the votes, so he could come out this year. But let’s say it stays. Do you think it will eventually make it to the Hall? He is still in his first few years of eligibility.

**Feinsand: **I covered him when he was with the Yankees from 2006-08 and I never thought I was looking at a Hall of Fame caliber player. I liked him a lot, so it’s nothing personal at all.

It’s hard to see a guy go from less than 10% to 75%. It can happen, but I don’t see it. There aren’t that many voters who have left him out just because of a ballot full of talent.

**Petriello: **I don’t think it will, but I do think that once this year’s ballot passes, a lot of spaces will open up, so we could see an increase among those voters who use their 10 options. It will last for 10 years and maybe reach 41%.

**Zolecki: **It will be interesting to see who wins the most votes once Bonds, Clemens, Schilling, etc., are off the ballot. But, I agree, I don’t think it will go in. Maybe at some point through the Veterans Committee. Again, we think the same of Dick Allen.

Round Table: Will Abreu make it to the Hall?