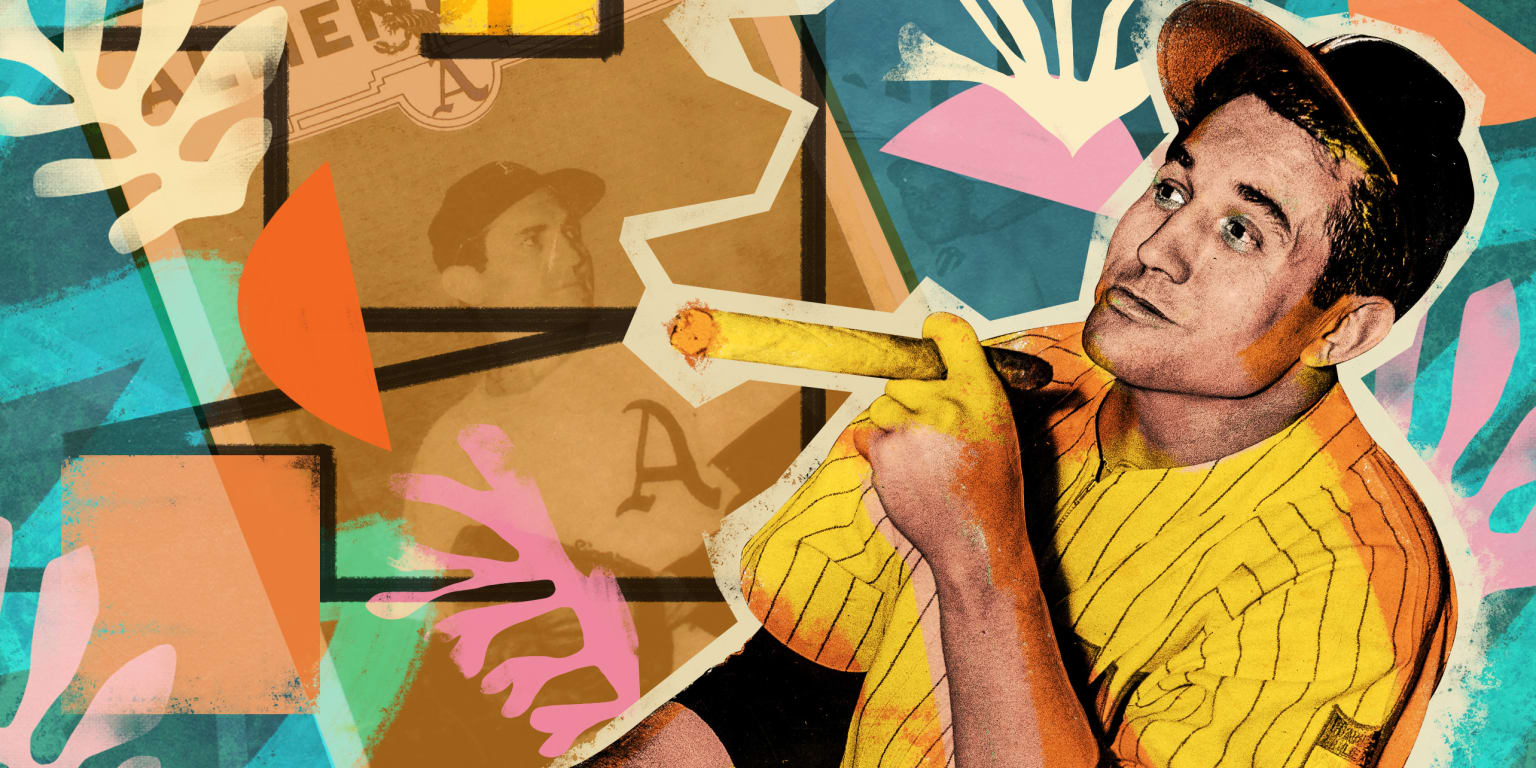 There was no way to do that Conrad Marrero stop throwing. It was like this when he started as a pitcher at age 27 in the amateur leagues of Cuba, his country of origin, as well as when he became a 39-year-old rookie with the Washington Senators in 1950 and also in 1999, when Marrero became refused to leave the mound before the Orioles faced the Cuban national team in a historic exhibition game.

Not kidding, by the way: In 1999, when the Orioles traveled to Havana, Marrero was called up to throw out the ceremonial first pitch. Except, as always, he didn’t throw his pitch, he waved to the crowd and walked off the field. He threw a ball. And then another pitch. And other. He didn’t stop until Brady Anderson finally did a half-swing.

The odd thing is that, for someone so devoted to pitching, Marrero didn’t start his career in that role. No, the player born in Sagua La Grande, a small town on the north coast of Cuba, began his life in baseball as a third baseman. But he decided to stop when, as he himself said, “I got hit in the face with a ball and lost several teeth.”

So, Marrero – and the tobacco that always seemed to stick to his mouth – moved onto the mound for the first time in 1938. He was immediately successful…at the age of 27. There are many players who would not dare to do something like that, but Conrado Marrero was not like most.

“And then in 1938, he joins an amateur league and becomes, overnight, the best pitcher,” Kit Krieger, a SABR member who owns Cubaball tours and who joined MLB.com, told MLB.com. became a close friend of Marrero. “But he was already 27 years old. You have to see what it’s like to start pitching at 27 and still end up winning 350 games,” continued Krieger, referring to Marrero’s total wins from multiple teams, leagues and countries.

That first year, Marrero won 10 games with a 2.54 ERA. Since then, he has not stopped improving, peaking in 1942 when he went 22-5 with an earned run average of 1.22 for Cienfuegos, becoming one of the most popular players on the Cuban national team. Fans packed the stands as he pitched and led the Cuban team to three amateur baseball world championship titles.

However, he didn’t turn pro until he was 35, after he was seen pitching two ninths in Cuba. And it was another four years before he made it to the big leagues. Like many others already elderly in his time, he did his best to hide his age, so that it would not prevent him from getting a job.

Senators owner Clark Griffith is said to have believed he was eight years younger. In The Saturday Evening Post they once wrote that Marrero was “surely 35 years old, absolutely 37, indisputably 43 and definitely 42.”

In any case, there are not many Major League players who debuted at 39 years old. In fact, Marrero is the 11th oldest rookie pitcher in history. And by the time of his premiere, he was just the eighth.

Scouts today probably wouldn’t look at him because of his size. According to records, he was just 5 feet 5 inches (1.65 meters) tall and weighed 158 pounds (71 kilograms), making Marrero the third-shortest pitcher in the modern era. The truth is that everything that is known about him suggests that he should never have reached the Big Top. But he still made it.

It earned a variety of clever nicknames for its long windup and great curve. In Cuba, he was known as “El Premier”, El Curveador and El Güajiro. Sadly, neither of those nicknames crossed over to the Major Leagues, where he was known as Connie, or “a little brawny gnome.”

Dominican Felipe Alou referred to his movement on the hill as “a cross between a windmill gone crazy and a duck trying to fly backwards.”

His career, in a way, was made for those kinds of jocular descriptions, something that Marrero certainly didn’t care about. Sure, he was known for his curveball, but he had all kinds of pitches in his repertoire. It is said that he once said that he threw “everything, except my tobacco”.

Blessed with several front-row pitches and a prodigious memory that allowed him to remember almost perfectly every pitch thrown to every batter he faced, Marrero once recounted how he managed to strike out Ted Williams. After causing Williams to foul off two sliders, Marrero unleashed a knuckleball to strike out the future Cooperstown member.

“Theodore hates the knuckleball . . . and the slider,” Marrero said. “But still, he learned how to hit them.”

Of course, we’re talking about one of the greatest hitters of all time, so Williams was able to get his revenge. This is how Marrero told Thomas Boswell of the Washington Post in 1978:

“In Boston he once gave me two home runs in one game. A slider. A knuckleball. After the match, he came to greet me and, putting his arm around my shoulder, he said: “Today was my day”.

“I told Williams,” Marrero continued, “every day is your day.” (This was true most of the time when they met: Williams tormented Marrero with a career .333/.450/.697 line in 40 plate appearances.)

Eddie Robinson, who was the oldest former Major League Baseball player at the time of his death last October, was also a teammate and rival of Marrero and remembered him well when he spoke to MLB.com in 2020. “He liked his good tobacco. . He raised his left leg. He was a great pitcher too,” Robinson said.

After being traded from the Senators to the White Sox, the two met regularly, with Marrero holding the slugger to just .175 batting average.

“After being traded to Chicago,” Robinson said, “I had to try to hit him, but it was really tough. He retired me very easy ”.

Apparently, Marrero seemed to know this very well. At 102 years old, the pitcher recalled a story about a batter he had to face whose last name was “Robinson.” Senators manager Bucky Harris came out to suggest that he throw it high and deep, but Marrero warned him that if he did that, the outfielders had to be prepared for a “big hit.” Instead, he proposed to throw him low and outside, with his break.

The two talked, but eventually Marrero offered something else.

“I bet him a tobacco, like this one, that he could withdraw it,” recalled Marrero.

Of course, Marrero dominated him with a fly ball, winning the pulse. Could this Robinson – one of the two Marrero faced – be Eddie? Robinson confirmed it with a smile.

Marrero’s career in the Big Top was short. Sure, if he started it when the common denominator struggles with the crisis of 40 years. Playing with the Senators didn’t help either.

He finished with a 39-40 record and a 3.67 ERA. Those numbers were solid enough for him to be called up to the 1951 All-Star Game, when he set a record as the oldest player to attend the event for the first time—a mark later broken by Satchel Paige. He remains one of just five players, including Nelson Cruz, Jamie Moyer and Tim Wakefield, to attend the Midseason Classic for the first time after turning 40.

But who knows how much better he could have been on a better team, or how famous he would have been had he pitched in the postseason.

sure, maybe could It would have been better if he had stopped throwing at some point. He spent the winters playing in Cuba. Apparently, he lost effectiveness late in seasons because he kept pitching “when other pitchers rested their bones.”

An example of that occurred in 1947. Pitching between Mexico and Washington’s C-Team, Marrero combined for a record of 37-8 over 451 innings.

Krieger asked how that was possible. “But he just didn’t get the question,” Krieger said. “His mechanics must have been perfect.”

Either way, age catches up even with those with subtle mechanics and ligaments blessed by the gods. After facing various problems in 1954 and being moved to the bullpen, Marrero was released by the Senators.

He then pitched with a Reds affiliated club in Havana until 1957. He then played in Nicaragua, where he had the most innings and wins, though those numbers were misplaced, before becoming a Red Sox scout. Add it all up, he was 353-173 with 88 shutouts. Not bad for someone who took off so late.

After the Cuban revolution, Marrero stayed in his country and became a legend. He helped develop pitchers, thanks to the wisdom he gained throughout his playing career. But, not everything went according to plan.

Years later, when Krieger met Marrero, he found an old man living in a small apartment with his grandson, on a pension of just $7 a month. With the help of other Cuban baseball enthusiasts, Krieger helped Marrero by sending him money, but it wasn’t enough. Krieger went to work quickly, collecting cards from old teammates and opponents of Marrero.

Krieger then contacted MLB, the MLB Players Association and BAT (Baseball Assistance Team) for help. He contacted Robinson, who called New York Daily News writer Bill Madden seeking any help for Marrero, who was ineligible for a pension because he had turned it down during his playing days.

But it wasn’t just the problems of getting the funds, there was also the matter of finding a way to get the money to Marrero.

Due to relations between Cuba and the United States, they could not simply transfer the amount to him.

So, in spy movie style, they figured out a way. Former Dominican major leaguer Stan Javier could easily enter Cuba and give Marrero the checks. In the last four years of his life, Marrero received $10,000 a year from baseball — “it was a big, tremendous difference,” Krieger said.

When asked how he became so close to Marrero and why an old major leaguer became such an important person to him, Krieger answered simply. “The best thing for me was to sit in the room with someone to talk about DiMaggio, Mantle and Bucky Harris – whom I called Bucky Harry,” Krieger said.

Marrero passed away in 2014, just days before his 103rd birthday and a national tribute to his life in baseball that had been scheduled. For the man who seemed never to forget the smallest detail of his career, in the end, he too was not forgotten by the sport.