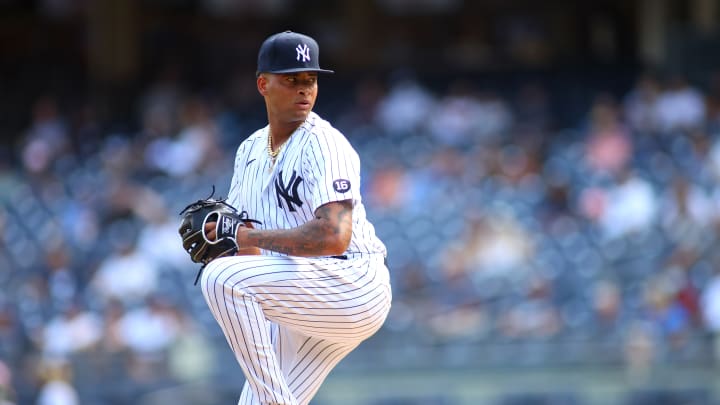 The New York Yankees have several pending movements once the work stoppage ends in the MLB. If the team doesn’t invest in level players to improve their roster, they could well use the talent they have on their farms to make changes in the middle of next season.

Ation, we mention the five prospects the Yankees can use in trade packages during the 2022 season.

Luis Gil was the sensation among the Yankees’ rookie pitchers for much of the 2021 season. The right-hander even showed his face in the face of injuries that affected the rotation, registering marks for rookie pitchers in the franchise and the Major Leagues. He made 6 starts, posted a 1-1 record with a 3.07 ERA. He showed the ability to strike out his opponents as he shot 38 in a total of 29.1 innings pitched.

After a year 2020 in which he showed conditions to get on the mound, Deivi García did not have a solid 2021 campaign, since he only had 2 starts with the Yankees in which he was defeated. In addition, he posted a high 6.48 ERA with 7 strikeouts in 8.1 innings pitched. However, the Dominican is one of the recurring pitchers that other teams ask Brian Cashman about when talking about player changes, a moment that he should take advantage of to take advantage of and negotiate.

Luis Medina It is a pitcher that has a powerful fastball that registers 100 miles per hour, according to Statcast reports. This year it was possible to see what he is capable of with the LIDOM East Bulls. In 21 starts during his minor league campaign, Medina recorded 133 strikeouts in a total of 106.1 innings thrown with the Advanced Class A and Double A branches. This pitching gem could be a reason to demand a good return from talented players by part of the Yankees management.

While the reporting on Clarke Schmidt is some of the best, the right-hander has seen little action in the past two major league seasons with the Yankees. It features a 94-mile-per-hour fastball, 84-mile gear change, and a “12-6” moving curve, rated one of the best in the system by Sports Illustrated. Between 2020 and 2021 he participated in 5 matches launched in which he records an ERA of 6.39. In the past the organization refused to change it, but it seems that in 2022 it could be the moment.

Oswaldo Cabrera was recently protected on the Yankees’ 40-man roster. His solid defense allows him to play with solvency in various positions in the box. This year the Venezuelan posted a .272 average, 29 homers and 89 RBIs in a total of 118 games, playing between the affiliates of Double A and Triple A. His talent could be used as a piece of change by the general manager, Brian Cashman, to improve some of the positions on the big team roster or perhaps to bring in a minor league player they are tracking.

5 prospects the Yankees can put into trade packages in 2022