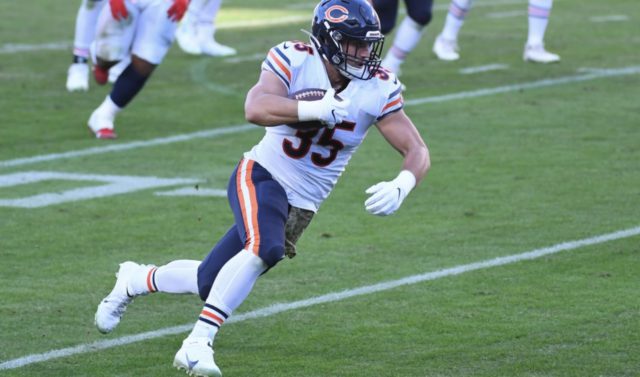 NFL free agency this year has seen little movement in the Cowboys’ front office. Despite its needs, the cowboy team has focused on extending a good part of its players who ended their contracts in March. Meanwhile, as far as external free agents are concerned, this Friday they made just their third addition of the year.

According to reports, the Cowboys have reached an agreement to sign running back Ryan Nall. This was confirmed by Sam Leaf, the player’s agent. The former Chicago Bears will have a one-year contract with the cowboy team, although the figures of said agreement are unknown at this time.

Cowboys signed former Bears RB Ryan Nall to a one-year contract today, his agent Sam Leaf said. Nall a versatile special teams player who worked out for team last Friday. I have played 577 snaps on special teams in Chicago and 95 on offense.

Nall, 26, came to the NFL in 2018 from the Bears as an undrafted rookie. There, the Oregon State product spent four seasons, managing to have more participation in the team since 2019. In fact, Nall stood out in Chicago for his versatility, mostly on special teams.

With the Bears, Nall appeared in 33 games, but none of them started. In all, the running back recorded just six carries for 12 yards. However, as a receiver, he had nine receptions for 71 yards and a touchdown. In addition, Nall participated in 577 special teams snaps in Chicago, this being his largest contribution on that team.

Ryan Nall scores his first touchdown because, sure, why not?

What role will Nall have in Dallas?

As we well know, the top running back spots will be held this year by Ezekiel Elliott and Tony Pollard. However, the Cowboys needed another depth piece at that position this year. Even more so after not re-signing Corey Clement, who filled that role in 2021. Now, with the signing of Ryan Nall, Clement’s departure appears to be covered.

Now, Nall may have another role in Dallas beyond being a special teams cog and depth element at his job. The former Bears has a large size and wingspan, which can be useful for gaining yards on “dirty” runs. In fact, he can be used as a fullback, an element that the cowboy team likes to have on its roster.

If that’s the case, Ryan Nall will have competition during camp. Both Nick Ralston and Sewo Olonilua aim to fight for that role in the next season. Besides, it remains to be seen what offensive coordinator Kellen Moore decides: whether to have a fullback on the roster to use as an extra blocker, or to assign that role to guard Connor McGovern on specific plays.

Now, if Nall does come to Dallas to be a third-back and special-teams candidate, he’ll have competition there, too. Rico Dowdle aims to make up lost ground after not playing last season due to injury. Besides, Ja’Quan Hardy is someone who will also fight hard for the job during training camp.

Ryan Nall trying to earn his spot on the Bears’ roster 💪💪 @ryannall34 pic.twitter.com/urIpjbUcop

In this way, Ryan Nall becomes the third outside free agent hired by the Cowboys this offseason. Weeks ago, the cowboy team added defensive end Dante Fowler and wide receiver James Washington. And while Dallas has needs it could address in free agency, it looks like the front office’s efforts will focus on beefing up through this year’s Draft.

Now, it remains to be seen how this bet pans out for the Cowboys. At this time, the team urgently needs to reinforce the positions of receiver, offensive guard and defensive end. And this, of course, without forgetting the positions of kicker and linebacker. However, the front office will bet everything on draft rookies instead of signing players with NFL experience. And this bet may, once again, backfire on Dallas.

The Cowboys sign a new running back. Who is it about?