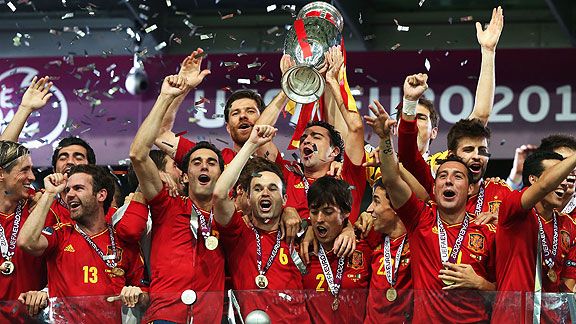 BARCELONA – Spain won its first European Championship in 1964 and did not relish success until 44 years later, when the final phase of the national team tournament in which it debuts against Sweden today had already changed the initial format to become, with more and more participants, in a long-distance championship.

However, in the tournament record, the Spanish team commands the classification with three titles and equaled with Germany, the number one without discussion, since these successes are accompanied by three runners-up and three third places.

With three winches in their showcases (2008 and 2012 accompany that first title in 1964), the team led by Luis Enrique maintains the indisputable goal of forgetting the bad drink of 2016, when it was undisguisedly eliminated by Italy in the round of 16 in the which meant the end of the era of Vicente del Bosque, and to recover the feelings of his best years … Even understanding that on paper he does not enjoy the role of candidate that other applicants can have.

Absent in the final phases of 1968, 1972, 1976 and 1992, of its eight participations with the group phase established, Spain began the tournament with different luck, although only one defeat: It won three times, drew four, and suffered only one defeat. . Curiously, of the three times he started winning only one (2008) he passed the first phase while in 2000, despite losing he did qualify.

Led by Ladislao Kubala, Spain made their debut at San Siro against host Italy, starting an optimistic goalless draw. Luck, however, was elusive from there and defeated in the second day by Belgium (ultimately finalist) by 2-1 and in the third by the same result against England they were eliminated at the first exchange.

Under the direction of Miguel Muñoz the Spanish team was left with honey on their lips in the final, defeat (2-0) by the host France and after overcoming the inextremis group stage with a goal from Maceda to Germany in the last sigh in the Park of the Princes. The tournament began by drawing in Saint-Étienne (1-1) with Romania to repeat the same result against Portugal in Marseille. Directly classified for the semifinals, in Lyon they beat Denmark in the penalty shootout 5-4 after ending the match with a 1-1 draw.

The last tournament with Miguel Muñoz on the bench began with a victory that did not herald the subsequent fiasco. They beat Denmark 3-2 in Hannover (with goals from Michel, Butragueño and Gordillo), before falling 1-0 to Italy in Frankfurt and bidding farewell with another 2-0 loss to hosts Germany in Munich.

Failed in the 1992 qualifying phase, she returned to the championship after four years, directed by Javier Clemente and with the memory of her good role in the World Cup in the United States. The road ended cruelly in the quarter-final penalty shootout, eliminated by hosts England 4-2 after ending the match with a scoreless draw. The tournament began with a regular draw (1-1) against Bulgaria followed by another with the same result against France and a victory in the last and vital 2-1 victory over Romania with a goal just minutes from the end of Guillermo Amor.

Under the leadership of José Antonio Camacho, in what was their first major tournament, Spain began with an unexpected and alarming setback, falling 1-0 to Norway in Rotterdam after a monumental blunder by goalkeeper Molina. She recovered on the second day, winning 2-1 over Slovenía and accomplished a miracle in the last one, defeating Yusgoslavia 4-3 thanks to two goals in added time from Mendieta and Alfonso that turned a sung elimination into a pass as champion of group … The joy lasted four days, until in the second round Zidane’s France (later champion) eliminated Spain in the quarterfinals 2-1 in Bruges.

With Iñaki Sáez on the bench, the Spanish team began the European Championship in Portugal with a suffered victory (1-0) over Russia in Faro, which was followed by a draw with Greece (1-1) and a defeat on matchday three against Portugal (0-1) that meant their elimination.

With a highly disputed Luis Aragonés at the helm after condemning Raúl, Spain fell apart until they won the title. His career began in Innsbruck with an excellent win (4-1) over Russia with a David Villa hat-trick. From there they beat Sweden and Greece 2-1 consecutively, beat Italy in the quarterfinals on penalties, crushed Russia 3-0 in the semifinals again and conquered glory by winning the final 1-0 to Germany with the unforgettable goal of Fernando Torres.

World Champion in South Africa two years earlier under the baton of Vicente del Bosque, La Roja debuted in 2012 with a suffered draw against Italy (1-1) in Gdansk. From there they crushed Ireland (4-0) and beat Croatia (1-0) by the minimum to overcome the group stage; they defeated France 2-0 in the quarterfinals, eliminated Portugal in the semifinals on penalties and destroyed Italy 4-0 in the Kiev final.

The farewell of Vicente del Bosque from the Spanish team was sad at the French European Championship. With the failure of the World Cup in Brazil still present, Spain debuted in Toulouse with a suffered victory over the Czech Republic thanks to a goal from Piqué in the final stretch. In the second day he had no opponent with Turkey, which he thrashed 3-0, but in the third he collapsed to lose to Croatia, which came back from the initial 1-0 and led him to a round of 16 cross against Italy in Saint-Denis, where the azzurra beat it 2-0 to cause its elimination.