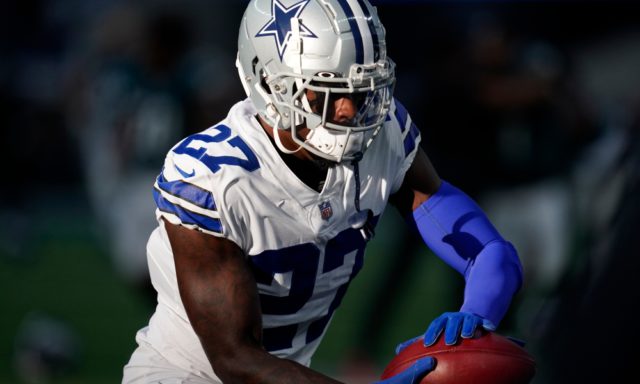 If there’s one thing that’s completely true when it comes to American football, it’s that many players show up on the field in pain. That was the case for defensive back Jayron Kearse, who played in the Thanksgiving edition against the Giants despite some soreness. However, there are many reports regarding the deep for several days. Where everything seems to indicate that the athlete, despite the misfortune, could play this Sunday night at AT&T Stadium.

As far as Kearse is concerned, you will have a lighter practice load. All this because the player made an appearance against New York with a dislocated right shoulder. However, this did not prevent him from participating in a total of 53 defensive snaps against the Giants. Which equates to 83% of the defense’s snaps in the entire game.

Jayron Kearse (shoulder) will be eased into practice this week — per MM — and will “have every chance” to take the field when the #Cowboys host the Colts.

He played in 53 snaps (83%) against the Giants (and well) despite the injury.

According to Dallas head coach Mike McCarthy, Jayron will have every possible opportunity to play against the Colts. Of course, this does not guarantee that he will have a presence on the field, but it is expected that he can be calm. Against New York he would finish with five combined tackles, although he already has two quarterback sacks as well. Being the last one against Kirk Cousins ​​in week 11 against the Vikings.

Come for the sack by Jayron Kearse
stay for the celebration

Either way, the thing to applaud is the way the defensive back played most of the game against the Giants with serious discomfort. And while the player was clearly struggling with something, it wouldn’t be until Friday morning that the media found out about it.

In fact, Jerry Jones spoke to 105.3 The Fan the day after the game about Kearse’s situation. Implying that he took great pride in the player from his organization. “I think it is exceptional. First of all, there is something to be said about it, and that is that to play professional football you have to deal with the pain,” Jerry said.

“We have very few players who don’t have some type of surgery after the season,” Jones added. “So these athletes play through pain, they play through malfunction, if you will, but they play through it all. It’s really one of the things I admire most about our players and the game itself. Very rarely, maybe the first day or two of boot camp they come out feeling their best. From that moment the injuries begin to lurk. So I’m proud of these guys, the way we responded yesterday. We could have let some of those bugs really hurt us and walked away with a huge disappointment, but it didn’t happen. That’s the mark of a good team.”

The Jayron Kearse thing has been an example of perseverance within the league, where he managed to get his fruits in the Vaqueros. Being a seventh round selection by the Vikings in the 2016 Draft, he was in the organization until the 2019 season. Getting to have a brief stint in Detroit and Baltimore between 2020 and January 2021, he would end up signing as a free agent for Dallas in the previous campaign. Thanks to his performance, which included 101 combined tackles, ten passes defensed and two interceptions, he re-signed with the Cowboys for two more seasons and $10 million.

A lot is expected of Kearse as he has had a few absences so far this season. Already in this 2022 he has missed three games thanks to discomfort in his knee. What it is is that he has been around since the Rams clash in week five onwards. Perhaps without these absences he would be nominated for the Pro Bowl, a goal that his position partner Donovan Wilson has been able to achieve. But regardless of this, he is still a fundamental part of the team.

Without a doubt, Jayron is a major element in Dan Quinn’s scheme. So it is hoped that he can recover from his injury or that he can at least be ready for the weekend. The reports will be seen in the coming days, but everything indicates that he will be against the Colts looking for another positive result for the Cowboys.