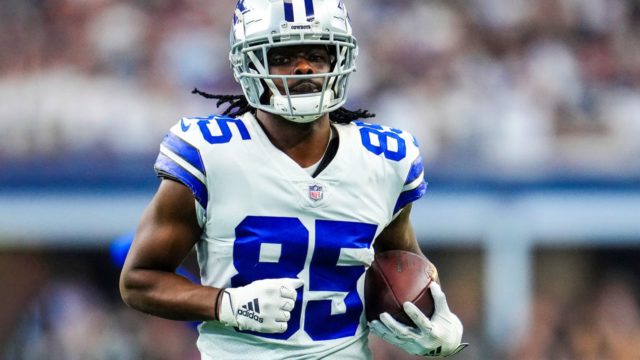 The Cowboys’ receiving corps raises some questions for this year. Following the trade of Amari Cooper and the departure of Cedrick Wilson Jr., this unit of the cowboy offense will have a new face. CeeDee Lamb aims to be the primary receiver, while Michael Gallup would move to second receiver once he recovers from his injury.

Behind them, the cowboy team has a group of young players who will fight for the third receiver job and backup spots: rookie Jalen Tolbert, James Washington, Noah Brown, TJ Vasher and Simi Fehoko. However, Dallas may need to shore up this position with an experienced receiver.

Due to this situation, different reporters and specialized media have placed some receivers as reinforcements for the Cowboys, either as free agents or via trade. Below, we’ll take a look at the receivers rumored to be potential targets for the Cowboy team before the start of camp.

Right now, Julio Jones sounds strong for several teams, including Dallas. The former Falcons and seven-time Pro Bowler is coming off two unproductive seasons due to injuries. In fact, this led to the Titans deciding to cut him last March after playing with them in the 2021 season.

Despite injuries and being 33 years old, Jones can be a valuable addition to the Cowboys. This veteran can serve as a mentor to Dallas’ young receiving corps, plus he would be a major factor in offensive production. This, at least, if he offers similar or higher numbers than last year: 31 receptions for 434 yards and a touchdown in 10 games.

On the other hand, Julio Jones’s good relationship with Dan Quinn (former Falcons head coach) could be another factor to facilitate the veteran’s arrival. This, of course, despite the fact that Jones would not be reporting directly to Quinn in Dallas. In addition, the age and physical conditions of the recipient could “cheaper” the cost of it for the cowboy leadership.

Another free agent media such as Sports Illustrated place as a good option for the Cowboys is Will Fuller. This receiver is coming off an unforgettable 2021 year with the Dolphins, after missing the first game due to suspension and suffering a season-ending thumb fracture in week 4. Fuller only managed four passes for 26 yards in two games, and this led Miami not to extend his contract.

However, his numbers in 2020 with the Houston Texans remain his best cover letter. That, in fact, has been Fuller’s best season in the NFL, posting 53 receptions for 879 yards and eight touchdowns in just 11 games.

The main problem with Will Fuller is his propensity for injuries. But, if he can stay healthy, he has the potential to be very productive offensively. For Dallas, Fuller could be a low-cost depth piece who has a little more experience compared to more than half of his current receivers.

Deshaun Watson found Will Fuller V and they are further apart on the scoreboard. #WeAreTexans #NFL #NFLTwitter pic.twitter.com/OcMZgIi3QB

Regarding options via exchange, a recent Bleacher Report article puts Diontae Johnson in the orbit of the cowboy team. The Pittsburgh Steelers wide receiver is coming off his best season in the NFL, registering 107 yards for 1,161 yards and eight touchdowns. All this in 14 games.

While the Steelers want Johnson in this first post-“Big Ben” season, the receiver has other plans. The Toledo product is in the final year of his rookie deal, and he may be looking for a significant extension.

However, Johnson only has one season with more than 1,000 receiving yards, which doesn’t seem like a good enough reason for the Steelers to offer him a juicy contract. And less now, that the salaries of receivers in the NFL have skyrocketed in recent months. If Pittsburgh plans to trade Johnson, Dallas would be a viable option. Besides, there he would meet his former partner James Washington.

Another receiver who is in the orbit of several teams is DK Metcalf. The Ole Miss product is entering the final year of his contract with the Seattle Seahawks, and he could be looking for a new contract or a trade to another team. However, Metcalf is also “saying the right words” right now after recently referring to the Seattle crowd as “family.”

Despite this, journalist Rich Eisen He thinks the Cowboys’ front office should contact the Seahawks and trade for the young receiver. In three years with the NFC West team, Metcalf has been consistent in his offensive production. His best numbers were in 2020, posting 83 receptions for 1,303 yards and 10 touchdowns. This earned him a Pro Bowl selection and second-team All-Pro that season.

While adding DK Metcalf would be a trademark move for Jerry Jones, it might not be in the Cowboys’ best financial interest. The Seattle wide receiver could aspire to a significant salary, and this is something that could complicate Dallas’ finances. This, let’s remember, considering that CeeDee Lamb and cornerback Trevon Diggs would start asking for contract extensions in 2023.

DK Metcalf runs away 84 yards for the touchdown! 😮pic.twitter.com/f1fG3WxC7g

One last feasible candidate for Dallas, according to review an article from The Landry HatIt would be Odell Beckham Jr. The former Giants and Browns player still has star status and the ability to be decisive. He demonstrated this in 2021 after being traded to the Rams, a team with which he won the Super Bowl.

Beckham’s production is not in doubt. In the regular season with Los Angeles, he had 27 receptions for 305 yards and five touchdowns in seven games. He has even surpassed 1,000 receiving yards in five of his eight NFL seasons.

However, the biggest concern with OBJ is his fitness. In 2020, an ACL injury ended his season in Week 7. And although he returned the following season, the wide receiver suffered another torn ACL during Super Bowl LVI against the Bengals, an injury from which he is still recovering .

It’s true that Odell Beckham Jr. is still a free agent and likely to return to the Rams. However, the receiver’s return to action is slated for November at the earliest, so he wouldn’t be an immediate contributor. Still, OBJ would be a viable (and negotiable) option for the Cowboys if they need an offensive boost midseason.

Although any of these receivers would be of great use to the Cowboys offense, it is almost certain that the front office will not add any. At the moment, the premise of trusting young players and free agents at low cost remains in Dallas. Only a complicated scenario during the season (low offensive production or major injuries) would lead to adding one of them. If it is still possible at that time, of course.

Five receivers who sound like possible reinforcements for the Cowboys