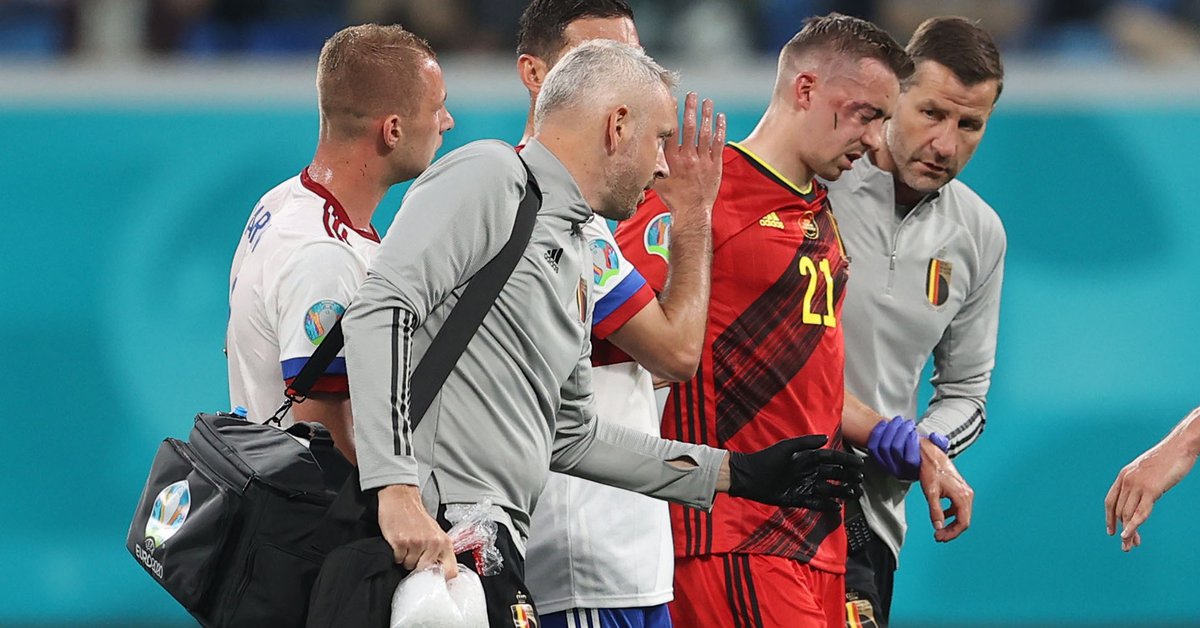 Unfortunately, the Danish Christian eriksen has not been the only footballer who had to be taken to a hospital from the field of play in a game of the Eurocup. And although the life of Timothy castagne was not in danger, the Belgian player of 25 years suffered fractures to her face and is out for the remainder of the tournament because she will undergo surgery on Tuesday.

This contest was the first major international tournament for a Castagne what happened from Atalanta to the Leicester city in the transfer market for the start of the last season. But his first experience was cut short in the minute 27 of the duel between Belgium Y Russia played on Saturday in Saint Petersburg, corresponding to the first date of Group B.

The young Belgian defender wanted to interrupt a counterattack and collided brutally with the Russian Daler Kuziáyev. They both jumped to contest the ball and hit their heads, which left Timothy castagne with a very damaged face. The referee Mateu lahoz he quickly stopped the game and ordered the medics to enter, aware of how strong the impact had been.

Timothy Castagne and Daler Kuzyayev were left lying on the ground after butting heads (Photo: REUTERS)

Kuzyayev was able to return to the pitch with a bandage on his head, but Castagne he withdrew with visible signs of pain and an ice pack on the inflamed area. Had to be replaced by Thomas meunier, who scored the second goal and then attended Romelu lukaku in triumph for 3-0 of the Red Devils at its premiere.

There was a lot of concern because Timothy castagne suffered from exophoria as a child, a condition in which two eyes are positioned slightly outward, and already had to undergo surgery in sight after a collision with the player Waasland-Beveren Ibou while playing for Genk on 2015..

Now they reported that he suffered six fractures in the face and will be operated on this Tuesday, according to the chain RTBF. The operation will last between two and four hours. With this provisional diagnosis, the right side has been practically ruled out for remainder of EURO 2020, whose definition is the July 11 in the stadium of Wembley.

Timothy Castagne had to leave the field of play after colliding with Kuzyayev (Photo: REUTERS)

“If we reach the final, of course he can come. But it will be necessary to see if it will be able to be in the field, I doubt it. From a medical point of view, it takes four weeks. But after the case of Axel Witsel, who should not be here after his injury, I do not exclude medical miracles”, Said on Monday Roberto Martínez, coach of Belgium.

He will hardly be able to play with his country again in this tournament but everything indicates that he will have no problems returning to preseason training with him. Leicester next month and be ready for the new season of the Premier League, which will start on August 14.

Christian Eriksen posted a photo on his social media and sent a message from his hospital bed
With France-Germany and the debut of Portugal, Group F of the Eurocup gets underway: time, TV and formations
Spain could not with Sweden in its debut in the Eurocopa