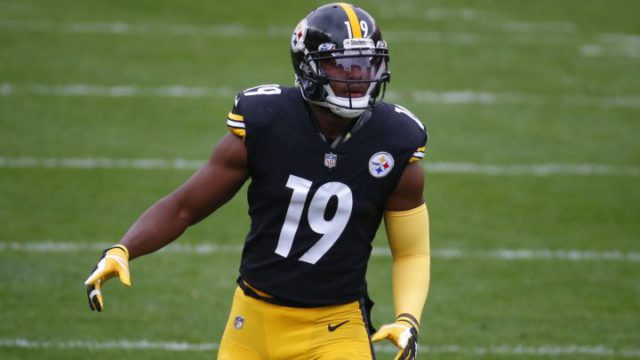 With the fact that the season has ended, it is evident that rumors and information about players who want to join the Lone Star team will arrive. This is something usual, especially taking into account that as of March many of them will be free agents and will be evaluating options to continue as professionals in the league.

In this case, wide receiver JuJu Smith-Schuster gave great feedback from the organization and Dak Prescott. Both elements were found in the facilities for the recording of a commercial for the 7-Eleven brand. Where the player who is still part of the Steelers made an unfavorable comparison to the facilities of the AFC North franchise. Making it clear that everything in Dallas is much better than what he has seen on his team.

“He’s unbeatable,” Smith-Schuster said. “The Steelers are still working on trying to get out of the wooden locker room. Here everything has a lot of prestige. They’re definitely going to listen to this, I want them to.”

The receiver would arrive in Pittsburgh in 2017 through the Draft, being a second round selection. Along with this, he was part of the Pro Bowl in the 2018 campaign. And although he still has a contract with the Steelers until March thanks to a one-year extension and eight million dollars, it is unlikely that he will continue in the organization. . Especially since a shoulder injury in Week 5 against the Broncos would practically sideline him for the entire season. Of course, he had the opportunity to return for the matchup of the wild card round against the Kansas City Chiefs. Where his team ended up losing 42 to 21.

For everything you’ve done for the organization, the city, and for the game. #ThankYou7 pic.twitter.com/a0AQWFVFUb

Also, with the announcement of quarterback Ben Roethlisberger’s retirement on Jan. 27, it’s likely that the rival organization will seek some kind of restructuring of the offense. A plan that Smith-Schuster may not fit into. Who in itself with his one-year extension did not meet expectations for the AFC North franchise.

Now, the catcher talked about Prescott, with whom he was shooting the commercial at the Cowboys’ facility behind closed doors. “Catching balls for Prescott in a facility like this, I wouldn’t mind,” the player said. “He has some really good guys around him, a great team and a great organization. So you never know.”

JuJu Smith-Schuster said at 7-Eleven event he’s “most likely” headed for free agency. On Dak Prescott: “He’s a great quarterback. Catching balls from him in a facility like this, I wouldn’t mind it. …The Steelers are still working on trying to get out of the wooden locker rooms” pic.twitter.com/fyuDPSpKE8

With these statements, Smith-Schuster is leaving the doors open to a possible hiring by the Cowboys. The rest will be a matter of evaluation. Of course, you have to remember that in free agency, the franchise is usually looking for offers. Large contracts are most of the time for elements that have a long time in the team and not for a newcomer player. In the case of the Steelers receiver, it could come cheap as his market value dropped dramatically thanks to his performance in the 2021 season.

However, the player has a certain history of immaturity that works against him. Especially through social networks, where he was dancing on top of the logos in some of the rival stadiums he was in, including the Cowboys during 2020. In addition, he was part of the milk box challenge, a movement viral that would end up being banned thanks to how dangerous it ended up being. While his quality as a player isn’t in dispute, perhaps Dallas is risking bringing in an element that could create locker room discipline problems, even on a one-year deal.

Plus, the organization already has a lot to deal with with the Michael Gallup and Cedrick Wilson Jr. situation. Both receivers will be unrestricted free agents in March, and the franchise will have to see if it can retain both of them or at least keep them. one of them. Likewise, there’s the whole Amari Cooper contract thing. So in the receiver section, the offices are already quite busy.

Without a doubt, a receiver like JuJu could help the Lone Star team hit targets on the field. However, the team already has elements to spare that can do this. Similarly, the player’s personality traits may not fit the identity of a team that is looking for the Super Bowl at any cost. Therefore, it may be in the best interest of the organization to focus on what they have and not be distracted by rumors or comments from outside the team.