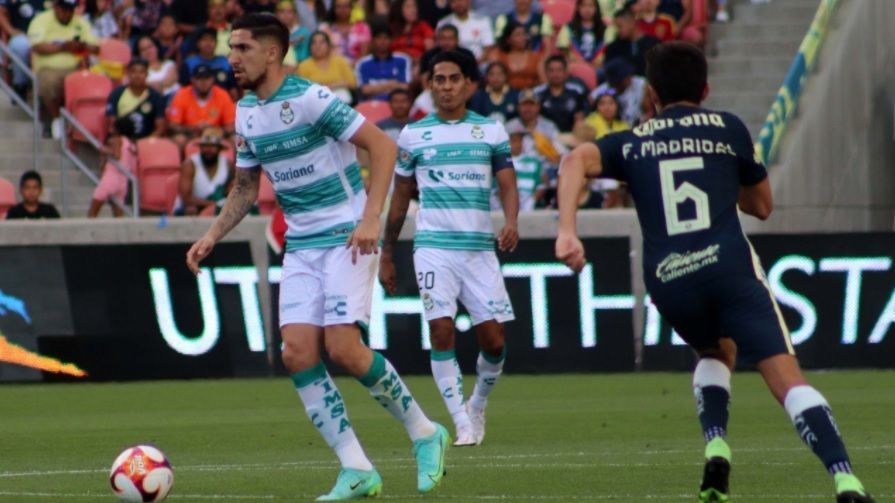 Thanks to a great definition from Roger Martínez, the Eagles beat Santos Laguna 1-0 in a preseason clash that was held in Salt Lake City

America began its tour of the United States with a 1-0 win over Santos with a score by Roger Martinez. The preparation duel will be recorded by the return of Nicolás Castillo to the fields, in addition to the fact that Fernando Madrigal, Miguel Layún and Salvador Reyes will present themselves as reinforcements of the azulcrema.

Roger Martinez He was the most outstanding player in the first half. The Colombian was in charge of opening the scoring after eleven minutes of play. A clearance by Oscar Jiménez led to an error by the defense of Saints, same that took advantage Mauro Lainez to serve the South American, who eluded two rivals to define in a great way before the shrinking of Carlos Acevedo placeholder image.

The game changed to 27 ‘due to the expulsion of Ronaldo Prieto, who saw the second yellow for a strong tackle on Fernando Madrigal. The arbitration decision triggered an exchange of words between Guillermo Almada and Miguel Layún, which ended up costing the coach of Saints.

For the second half there were few dangerous actions in the goals, so the highlight was the return of Nicolás Castillo to the fields. The Chilean entered at 60 ‘to replace Mauro Lainez.

For the last 15 minutes of the engagement, the coach of the America sent Alan Arreola and Mauricio Galván to the field for Álvaro Fidalgo and Fernando Madrigal.

At 86 ‘, Nicolas Castillo He had the opportunity to score the second goal for the Eagles, but lacked speed to win the position of the ball from Gibran Lajud, goalkeeper who had taken the place of Carlos Acevedo.

The Eagles’ tour of the United States will continue next Wednesday, July 7, the day on which the Atlas will be measured and will close on the 10th of the same month with the confrontation against Tigres.